Hotels are blaming minimum room rates on the government, but Egyptian officials deny responsibility for cancelled bookings and price hikes 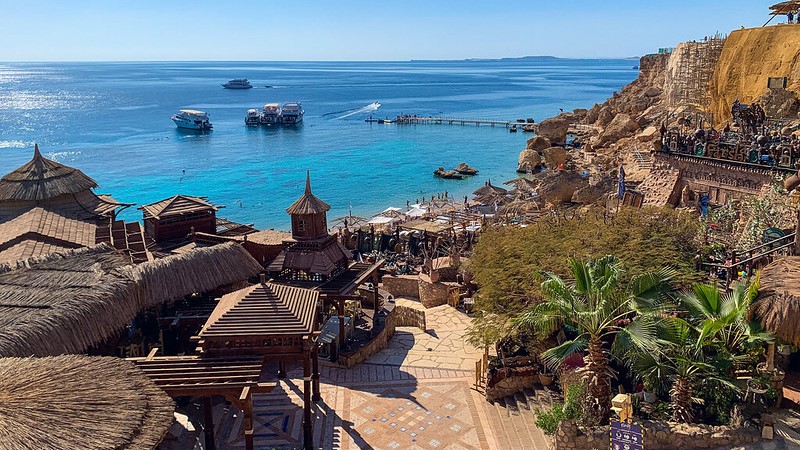 A hotel on the beach in Sharm el-Sheikh, Egypt (Photo: Serhio Magpie/Flickr)

The Egyptian government is defending itself from accusations of price gouging, as delegates complain of inflated hotel room rates and cancelled bookings for the Cop27 climate summit.

During a logistics briefing on Tuesday, green and youth groups told the Egyptian host they were being priced out of the conference. They described as “unprecedented” the barriers to securing affordable accommodation in the Red Sea beach resort of Sharm el-Sheikh and obtaining visas.

In February, Climate Home News reported on a letter from the Egyptian Hotel Association (EHA) to hotels in the city. It laid out minimum prices for hotel rooms during the conference, describing the event as a “unique tourism opportunity”. A night in a five-star hotel would cost at least $500 and $120 for a two-star institution.

Since then, delegates who made early bookings have had their reservations cancelled and been told to pay three to six times the price initially advertised.

A spokesperson for the hotel association told Climate Home on Tuesday that the directive followed a decision from the government committee in charge of organising Cop27. But the Egyptian government is distancing itself from the memo.

Ambassador Achraf Ibrahim, logistics coordinator for Cop27, told the briefing he had “seen the letter one thousand times” and insisted it was “not a governmental decision”.

Climate Home understands that some developed country delegations are insisting that hotels honour bookings made at lower prices. They have questioned the legal standing of the EHA directive, which is being cited as a justification for the price hikes but hasn’t been recorded in Egypt’s official gazette, nor passed as law.

Specialist news outlet Carbon Pulse reported that it booked accommodation worth £11,000 ($13,000) last November. The reservations were cancelled this month and the rooms re-advertised for three times the price, it said.

Several delegates showed Climate Home room cancellation messages that cited “rates set by the Egyptian government” or “legislation in force in the country”.

NGO CARE Climate Change said one hotel hiked the price of rooms they had booked from $75 to $500 a night.

Last month, a five-star hotel informed a delegate from another NGO of a $400 nightly surcharge to the cost of rooms. It claimed “all [Cop27] participating properties have been instructed by government to apply a specific rate to all bookings received during the summit period”.

Ibrahim maintained the price hikes had nothing to do with the government. In response to a wave of complaints from delegates, the Egyptian government tried to negotiate with hotels but many refused to lower their prices, he said. “They are private entities and have their own policies.”

Some two and three-star institutions agreed to a price cap of $120 a night and $160-220 respectively depending on the placement of the hotel – prices already more expensive than usual.

“The government of Egypt is very keen that this Cop is inclusive and everybody can be present and participate,” Ibrahim said.

Campaigners argue that even the lower $120-a-night rate is prohibitively expensive for many delegates, particularly from poorer nations.

Harjeet Singh, of the Climate Action Network, told Ibrahim the Egyptian government had a responsibility to ensure Cop27 was inclusive. “This is absolutely unprecedented. I can tell you the upper ceiling happens to be $100 for a majority of organisations. Even affording $100 dollars is too expensive for us to stay for two weeks.”

“I feel the presidency has a long way to go in making sure that accommodation is at least affordable,” said Elizabeth Gulugulu, of Zimbabwe, who represents the youth constituency in the UN process. She suggested organisers set up a campsite and a platform to allow Sharm el-Sheikh residents to host delegates, as cheaper options.

Ibrahim said time was too short to organise homestays and accommodation had always been difficult to book during climate negotiations. He suggested that two people sharing a double room in a two-star hotel and paying $60 a night each “is not too expensive”.

“I lived in Kinshasa. I lived in Nairobi and I know the hotel prices so when we say $60 per person, it’s really fair, it’s not expensive,” said Ibrahim.

The recording of the meeting, which was livestreamed on YouTube, is no longer accessible.