The government will offer financial aid to those who lost homes and crops in Pakistan’s worst-ever floods, Shahbaz Sharif said 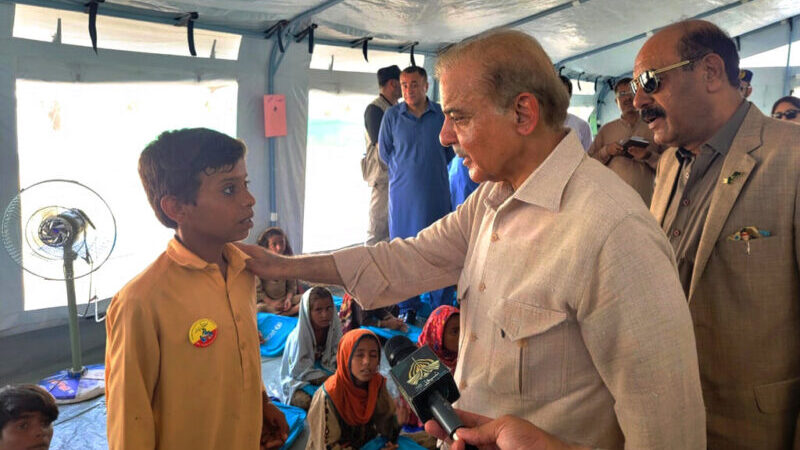 Pakistan's prime minister Shahbaz Sharif, second right, talks to a student at a makeshift school inside a tent in the flood-hit area of Suhbatpur in Baluchistan, Pakistan (Press Information Department via AP)

Pakistan’s prime minister on Wednesday promised the country’s homeless people that the government will ensure they are paid to rebuild and return to their lives after the country’s worst-ever floods.

With winter just weeks away, half a million people are living in camps after being displaced by the flood, which destroyed 1.7 million homes. So far, the government’s priority has been to deliver food, tents and cash to the victims. The floods have killed 1,481 people since mid-June and affected 33 million.

“We will do our best to financially help you so that you can rebuild homes” and return to a normal life, prime minister Shahbaz Sharif told several families living in tents and makeshift homes in the town of Suhbatpur in Baluchistan. “Those who lost homes and crops will get compensation from the government,” he said in his televised comments.

Sharif also told dozens of school children, who were studying in a tent with help from the UN children’s agency Unicef in the town of Suhbatpur, that they will get a new school in the next two months.

“Pakistan never witnessed such huge climate-induced devastation,” Sharif told a gathering of lawyers in Islamabad on Wednesday. “It was painful to see inundated villages, towns and cities.”

Sharif said the winter season will start in Pakistan after 15 days, and “then another challenge for the flood victims will be how to survive in the harsh cold” as currently they were living in tents in summer.

Even providing clean drinking water to flood-affected people has become a challenge, he said.

The floods have destroyed 70% of wheat, cotton and other crops in Pakistan. Initially, Pakistan estimated that the floods caused $10 billion in damages, but now the government says the economic toll is far greater. The United Nations has urged the international community, especially those responsible for climate change, to send more help to Pakistan.

The monsoon rains have swept away entire villages, bridges and roads, leaving hundreds of thousands homeless. At one point, a third of the country’s territory was inundated with water.

Also Wednesday, Pakistan’s minister for climate change, Sherry Rehman, told a gathering of lawmakers from the Asia Pacific in the capital, Islamabad that right now the entire world is facing a threat from climate change which, she said, “knows no border”.

She called for reducing emissions to save other countries from the damage that her country is facing now.

Meanwhile, the first planeload of aid from Saudi Arabia arrived in Pakistan overnight.

So far, UN agencies and various countries, including the United States, have sent about 90 planeloads of aid.

On Wednesday, Julien Harneis, UN resident coordinator in Pakistan, told a news conference that member states had committed $150 million in response to an emergency appeal for $160 million.