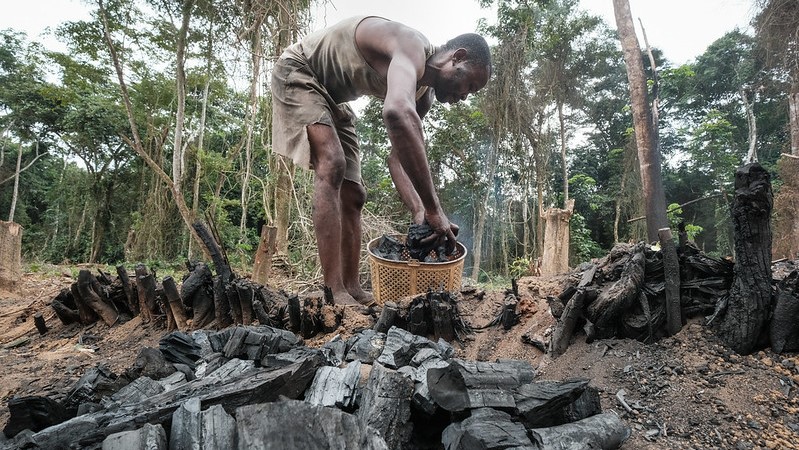 Small-scale farmers and charcoal makers have long been blamed for deforestation in the Congo basin. But plans to drill for oil and gas are a much bigger climate threat, a leading researcher told Climate Home News.

Aurelie Shapiro, the lead author on an upcoming report by the Food and Agricultural Organization, said an oil rush risked wiping out the benefits from promoting sustainable farming and energy use.

At the end of July, the government of the Democratic Republic of Congo (DRC) opened an auction for 27 oil and 3 gas blocks. Some of these overlap with a tropical peatland complex, one of the world’s biggest carbon sinks.

Citing the work of climate scientist Simon Lewis and Greenpeace campaigning, Shapiro described this as “a giant carbon bomb”.

It raises questions on the priorities of climate finance in the region. The Central African Forest Initiative (Cafi) supports six countries in the Congo Basin to preserve the forest, meet development goals and reduce poverty with funding from eight donor countries.

On a webpage about its work in the DRC, Cafi states that “forest loss is due to poverty, to a local need for land and forest products (small-scale slash-and-burn agriculture and charcoal) exacerbated by strong population growth”.  It doesn’t mention any other drivers.

A $500m deal signed between Cafi and DRC bans oil drilling only where it is “incompatible with conservation objectives in Protected Areas”. It does not identify the carbon value of peatlands as grounds to prevent development.

Charcoal production has dominated the narrative about deforestation in DRC because its use is ubiquitous in the country. Only 17% of the population had access to electricity by 2019, according to the World Bank. The government says the rate is 9%. Fast-expanding urban areas like Kinshasa drive a huge demand for charcoal briquettes.

But Shapiro said it was unlikely to be a main driver of forest loss.

The FAO study, commissioned by Cafi, takes a detailed look at the drivers of deforestation and forest degradation annually in the Congo Basin from 2016 to 2020.

Researchers checked high-resolution satellite imagery of more than 12,000 sample plots in the region going back to 2015. The findings are due to be published in the autumn, subject to peer review.

They found that deforestation during the period was much higher than before 2015, but hasn’t increased year-on-year. “Everybody is saying that deforestation [in the Congo basin] is exploding. We aren’t seeing this,” Shapiro said.

The study confirms that small-scale agriculture remains the most widespread deforestation driver in the region.

It identifies important forest degradation, much of which is likely to be caused by charcoal production. But the data is patchy.

While satellite imagery has become better at identifying small forest clearings, it cannot determine why the trees are being felled.

A 2018 study in Science Advances estimated that charcoal production does not exceed 10% of forest loss in DRC.

‘Nibbling on the edge’

Without access to chainsaws or heavy machinery, “people are nibbling on the edge of the forest,” Shapiro explained. They don’t cut the biggest trees, which store the most carbon.

Importantly, she added, this has a shorter-lived impact on the forest than industrial activities such as mining and large-scale agriculture. Oil drilling, which has yet to start in the region, is not in the scope of the FAO study.

Slash-and-burn techniques are used by communities to clear trees close to villages. They plant and grow crops for three to five years in one place before leaving the land fallow, allowing wild vegetation to return. The younger trees can in turn be felled to produce charcoal. “The point is to stop blaming people who have no alternative,” she said.

The DRC government argues that the country needs oil and gas exploitation to boost economic growth and lift people out of poverty.

Civil society groups welcomed the reframing of the debate on deforestation in the region.

Alphonse Valivambene, a civil society leader in Eastern DRC, told Climate Home that poor rural communities had been “an easy target to blame” for the country’s poor forest governance. They received barely any climate finance.

Valivambene called for a more “holistic” approach to policy that considers the poverty people live in.

The Rainforest Foundation has long argued the models that informed funding and policies for reducing emissions from deforestation in the Congo basin were based on “simplistic assumptions”.

“The disproportionate targeting of small-scale agriculture, which mostly occurs on a rotational basis on the periphery of villages, has allowed industrial threats to go unchecked,” said Joe Eisen, executive director of the Rainforest Foundation UK.

Earlier this month, the NGO sounded the alarm on a road-building project threatening a 200,000 hectare intact forest in Cameroon. It argued the road would not connect existing villages and wouldn’t contribute to local development.

Cafi declined to comment before the study is formally published.

This article was updated to clarify the scope of the Food and Agricultural Organization draft report, which does not directly address oil development. Opinions expressed on oil are the researcher’s own, based on other sources of evidence.