At least three of 16 oil blocks earmarked for drilling overlap with the world’s largest tropical peatland complex, posing a double threat to the climate 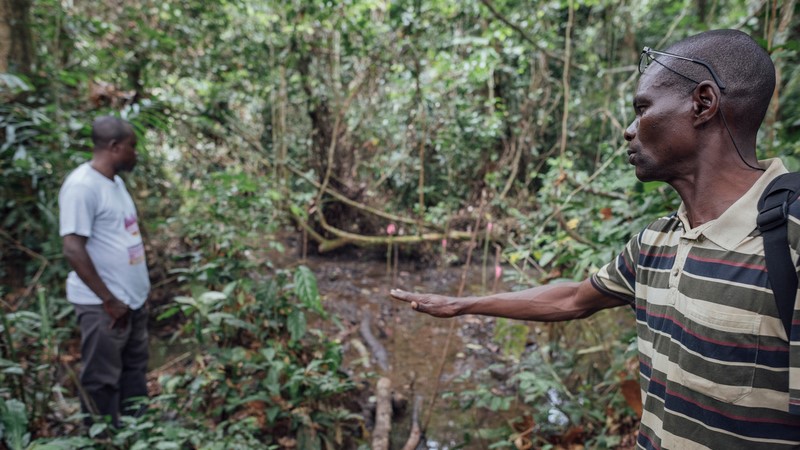 Cabinet ministers in the Democratic Republic of Congo have approved the auction of 16 oil blocks, including in one of the world’s largest carbon sinks and most environmentally sensitive areas.

Nine of the blocks are located in a region of the Congo Basin known as the Cuvette Centrale, an area about a third of the size of California which is home to the world’s largest tropical peatland complex. At least three of the blocks up for auction directly overlap with the peatlands, according to the Rainforest Foundation UK.

Left undisturbed, this tropical peat swamp forest is likely to remain a carbon sink and counteract some global heating. But if the peat is drained or the land converted to other use, it could become a significant source of emissions.

Inviting big oil into the Congo Basin would have “cataclysmic consequences for the global climate and local communities,” said Greenpeace Africa.

“The plan for big oil companies to trash Congo’s most sensitive ecosystems is a historic error that must be scrapped immediately,” added Irene Wabiwa Betoko, the NGOs’ international project leader for the Congo Basin forest for Greenpeace Africa.

The heat in Delhi is unbearable. This is what the climate crisis feels like

Oil production in DRC is currently limited to 25,000 barrels per day, all of which is exported. Minutes from the cabinet meeting on 8 April show the government is hoping to increase production to bolster its revenues.

The country has the second largest crude oil reserves in central and southern Africa after Angola.

Oil majors including Total and Eni already have concessions in the Cuvette Centrale region, although no exploration has taken place so far. In 2019, Total’s CEO Patrick Pouyanné told local journalists the company was willing to undertake seismic surveys in the region to “help Congo to evaluate its resources”.

In an overview of the country’s oil and gas sector published at the end of last year, the US International Trade Administration said “there is room” for American companies with “experience in complex and fragile environments to establish a foothold in the DRC”.

Campaigners say oil drilling in the DRC’s forests contradicts the government’s plan to become a “solution country” to climate change, by storing carbon in its forests and generating energy from hydropower in the Congo River and its tributaries.

A major UN science report published by the Intergovernmental Panel on Climate Change earlier this month warned that an expansion of fossil fuel infrastructure will lock in high emissions, blowing past international temperature goals.

The planned tender for new oil blocks comes amid serious concerns over the government’s ability to control deforestation in the word’s second largest rainforest.

Meanwhile, deforestation levels have plateaued at nearly half a million hectares of primary forest loss a year since 2016 – an area about three times the size of London.

Joe Eisen is executive director of the Rainforest Foundation UK, which is working to establish community-based forest management in the country. He told Climate Home oil exploitation in the Congo Basin would be “an unmitigated disaster for the climate and hundreds of forest-dependent communities in the peatlands and elsewhere”.

The recent developments in DRC’s forest sector have put international donors in an uncomfortable position. At the last round of UN climate talks, UK, South Korea, Norway and several EU member states pledged $500m over five years to protect the country’s forest through the Central African Forest Initiative (Cafi).

The deal with Cafi doesn’t explicitly call for a ban in oil drilling in the peatlands but in protected areas where it is incompatible with conservation objectives. The money further hinges on the publication of an analysis by the end of 2023 to determine the extent to which mining and oil concessions overlap with or impact protected areas and high-value forests and peatlands.

Eisen told Climate Home the prospect of oil drilling in DRC’s peatlands raised serious questions about the efficacy of the $500m forest protection agreement signed at Cop26 in Glasgow, UK.

“The DR Congo badly needs development but of a kind that benefits both people and the planet,” he said.