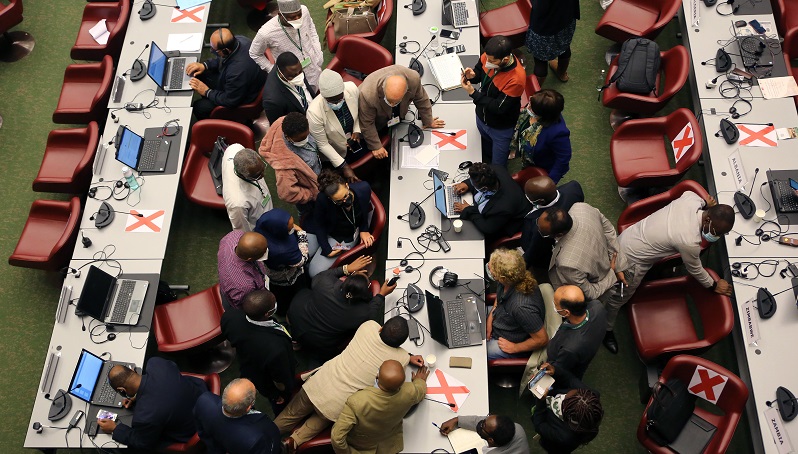 The inclusion of rights-based language in a global agreement to protect nature by 2030 is being threatened by loopholes and a proposal to streamline the text, sources close to the negotiations have told Climate Home News.

Two weeks of slow and tedious negotiations on agreeing on a global framework to halt and reverse biodiversity loss came to a close in Geneva, Switzerland, on Tuesday. Little progress has been made in advancing a deal due to be adopted at a biodiversity summit in Kunming, China, later this year.

Many countries supported the inclusion of language on the rights of indigenous peoples and local communities and of the role they have traditionally played as stewards of nature.

But not everyone agreed on how this should be reflected in the text.  Russia and China have pushed back against wording on “human rights” and references to a resolution of the UN Human Rights Council on the human right to a clean, healthy, and sustainable environment.

Others, including South Korea, have argued for rights-based language to be relegated to a separate section of the deal on cross-cutting issues designed to guide its implementation.

“If we don’t have a framework to protect nature that truly recognises and respects the rights of indigenous peoples and local communities — those who are actually conserving biodiversity — we are all going to be in danger,” said Ramiro Batzin, co-chair of the International Indigenous Forum on Biodiversity.

Draft targets include references to indigenous and local communities throughout, in recognition of their rights to land tenure, resources, traditional knowledge and free, prior and informed consent.

But most of the text, including key conservation targets such as a proposal to protect 30% of the Earth’s land and oceans by 2030, remain in brackets, indicating that it is still subject to negotiations.

“[Negotiators] don’t seem to feel the urgency and the need to act to address biodiversity loss, “ said Jennifer Tauli Corpuz, a lawyer and a member of the Kankanaey Igorot people from northern Philippines.  Attending the meeting, she described the process as “frustrating”.

Indigenous groups have repeatedly warned that adopting a rights-based approach to conservation is critical to the success of the agreement. In recent years, a ballooning body of studies has shown that indigenous territories have lower or similar levels of deforestation to other protected areas.

Yet, in some parts of the world, indigenous communities have been abused, pushed off their land and sometimes killed in the name of conservation.

Corpuz is cautiously optimistic about the inclusion of a reference to “the rights of Indigenous Peoples and local communities” in the conservation target to protect 30% of the Earth’s land and seas. It is outside of brackets, suggesting no country raised direct opposition.

But “the fight is not over,” she said, fearing that more specific language could still be deleted from the text.

A proposal by the negotiations’ co-chairs to “avoid overburdening the text” and to ensure it remains “clear, concise and communicable” could relegate detailed references to rights to a section on cross-cutting issues designed to guide the agreement’s implementation.

Australia and New Zealand have argued that references to indigenous people’s “free, prior and informed consent” should be stripped out of the main text and included in this new section, one source told Climate Home.

In a letter to the meetings co-chairs, campaigners argued the proposal risked “downgrading” important principles that should be strengthened rather than removed and that countries will be less likely to implement these principles if they aren’t mentioned in the operative section of the deal.

Meanwhile, a proposal pushed by China to include language for upholding rights “in accordance with national legislation” would provide a loophole for countries which do not recognise indigenous rights to wiggle out of any commitment.

An analysis of the draft deal, released last week by the Forest Peoples Programme NGO, argued that without further progress on rights-based language, the agreement “risks falling short of its ambition to achieve transformative change”.

Indigenous groups have called for an increase in direct funding to help them continue their role as guardians of nature. So far, they receive less than 1% of climate funding despite protecting 80% of the world’s biodiversity.

Funding is also needed for indigenous groups to continue to participating in the talks.

Countries agreed to meeting again in Nairobi, Kenya, from 21-26 June to make progress on key elements of the agreement.

The International Indigenous Forum on Biodiversity is scrambling to secure funding to attend this additional session. Corpuz said indigenous people must be “at the table”.