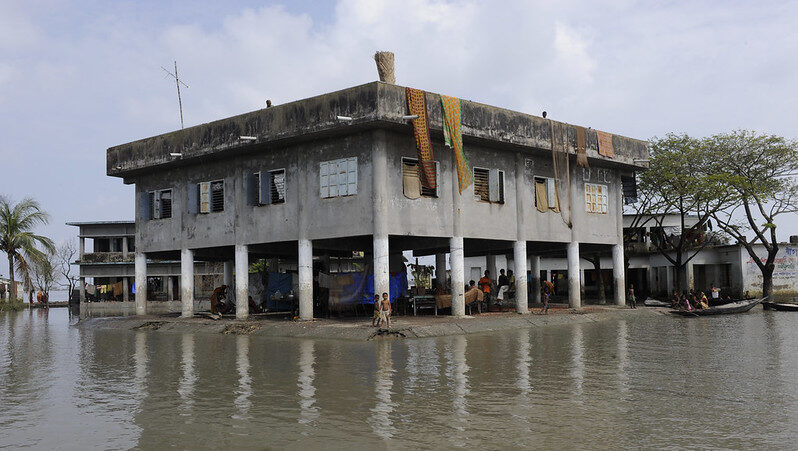 For the first time, the UN’s climate science body has spotlighted the mental health challenges caused by rising temperatures and extreme weather events, in its landmark assessment of climate risks and humankind’s ability to adapt to them.

In its first report on climate impacts since 2014, the Intergovernmental Panel on Climate Change (IPCC) says some impacts are already “irreversible” and that 3.3-3.6 billion people live in “contexts that are highly vulnerable to climate change” – a total that is projected to rise.

The report notes there is “very high confidence” that climate change has adversely affected the mental health of people in assessed regions.

“It is a huge step that we see mental health mentioned for the first time in the most influential report on climate change,” Gesche Huebner, lecturer in sustainable and healthy built environments at University College London, told Climate Home News. “Climate change is the biggest mental health threat in the decades to come,” she said.

Scientists expressed “high confidence” that there is an association between high temperatures and worsening mental health. Mental health outcomes associated with high temperatures include suicide, psychiatric hospital admissions, and experiences of anxiety, depression and acute stress.

“There is a lot of research linking higher temperatures to psychiatric admissions, but we need more evidence for the causal mechanisms,” Susan Clayton, one of the lead authors of the health chapter in the IPCC report and professor of psychology at the College of Wooster in Ohio, told Climate Home News. “We don’t yet have good data to say what the exact link is.”

According to a report by Imperial College’s Grantham Institute on Climate Change and the Environment, people with a pre-existing mental illness, particularly psychosis, have a two to three times higher risk of death during heatwaves than people without.

Exposure to extreme weather events, such as floods and hurricanes, can lead to a wide range of mental health problems, including depression and PTSD, according to the IPCC report. “[These events] are often very stressful and traumatic, [resulting] in ongoing changes to communities and forcing people to move from their homes,” said Lawrance.

For every one person affected physically during a disaster, 40 people are affected psychologically, according to the Grantham Institute report.

To help people cope in the aftermath of an extreme event, countries should invest in providing “psychological first aid” and bolstering emotional resilience within vulnerable communities, said Clayton. “People who are not mental health professionals can be trained to provide that.” Investing in physical infrastructure, such as emergency shelters, can also help people feel safer and “better mentally” ahead of an event hitting, she said.

According to the IPCC report, there is less scientific evidence that anxiety about the climate crisis, also known as solastalgia, leads to an increase in mental health problems.

“There is lots of evidence that people are concerned, worried and fearful about climate change, but does it affect their mental health? Just being anxious about climate does not mean you have a mental illness,” said Clayton.

While the research focus on the topic has increased in the western world, there are major data gaps across Africa, Asia and South America – regions where many communities are highly vulnerable to extreme weather. In many countries, mental illness is stigmatised and suicides may not be logged, said Huebner. “That is a huge issue… It will take quite some time to overcome this. It is really important to work with the countries in question on this.”