Under bombing, Ukrainian scientists taking part in the approval session of the upcoming IPCC report have had to withdraw from the meeting 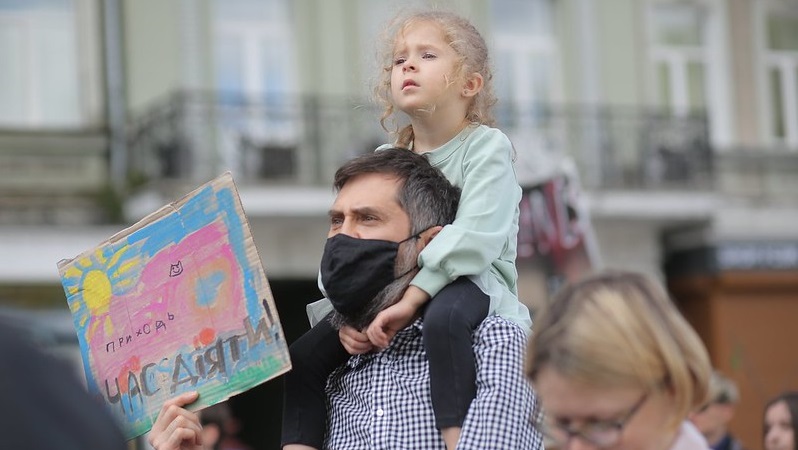 Two protestors at a climate march in Kyiv in 2021 (Photo: Ecoaction/Flickr)

As Russian troops move towards Ukraine’s capital Kyiv, climate scientists, campaigners and policymakers have been pulled away from their life’s work.

The Russian military entered parts of eastern Ukraine on Tuesday and then advanced into the rest of the country and towards its capital Kyiv on Thursday.

Svitlana Krakovsa is a meteorologist who was one of the first Ukranian women to study Antarctica in the late 1990s.

Over the last two weeks, she has joined scientific colleagues meeting with government representatives to approve the Intergovernmental Panel on Climate Change’s (IPCC) upcoming report on climate adaptation and its limits.

Due to Covid-19, these discussions have been held online, which Krakovsa joined from Kyiv, a city which has been hit by rockets in the last two days as Russian troops advance towards it.

She told Climate Home News that she and other Ukrainian scientists left the IPCC’s approval meeting early. “We need to think about [the] safety of our families and it is not possible to concentrate on the wording of the summary for policymakers under attack and bombing”.

Others have decided to flee the city to safety. Olha Boiko is a regional co-ordinator for Climate Action Network and was based in Kyiv. At 5am yesterday, explosions woke her as Russia moved into the country.

She and her partner quickly packed and got a train out of the city. “It was very hard,” she said. The everyday reality of a few days prior had faded. “No-one even checked the tickets”.

They arrived in a city in the west of Ukraine to decide what to do next. “When you need to pack and leave in a few hours, all working meetings go on hold. When you don’t know if you will make it to Monday, planning a conference in June is also out of the question,” she told Climate Home. “The war is not limited by politicians and army. It touches all of us.”

Boiko said she was trying to remain in contact with her colleagues abroad and continue her work. “But it’s sure hard as our friends and colleagues spend nights in the bomb shelters. We might spend the night in a shelter too tonight, nobody knows.”

Natalia Gozak is the director of environmental NGO Eco Action. She was also woken up by explosions in Kyiv in the early hours of Thursday. At midday, she got in her car and drove west.

“We were not alone,” she said. The traffic meant that a journey that normally took two hours took more than eight. After staying with friends, she got back in the car and drove another eight hours towards the town of Lviv before speaking to Climate Home from the car.

“We feel frustrated and shocked because this is real madness,” she said. But Ukrainians are patriotic and confident in their armed forces, she added.

Gozak hopes Lviv will be safe or she will have to leave the country. The invasion’s impact on her work was “disappointing”, she said. Eco Action has spent years on climate dialogue and “in just a few days, all this work looks like it has disappeared because of the priority of defending the country”.

She is confident Ukraine will eventually push back the Russian invaders. If that takes years, she said climate work in the country may have to start again from scratch. And Eco Action could shift its attention to humanitarian or social priorities.

One senior staff member at an energy company, who is not authorised to talk to the media, has been working to promote green manufacturing in Ukraine.

But the private investments on which Ukraine depends for its energy transition are drying up. Investors are “afraid to invest in Ukraine,” he told Climate Home on Wednesday. Recent conversation with officials in London, Berlin, Brussels and Washington about securing export credit guarantees for green projects are “not relevant now at all unfortunately,”he said.

The Ukrainian government released a climate plan in August which aimed to grow the country’s economy without increasing its emissions.

It planned a “just transition” from coal to renewables with spending on insulating Ukraine’s draughty apartment blocks.

But the government’s future and its power to deliver the plan is now under severe threat. A Ukrainian parliamentary decree allows all government spending to be re-allocated to the military following the Russian invasion.