An estimated 13-20 million workers in India depend on coal assets for their livelihoods, raising the need for a transition plan and financial support 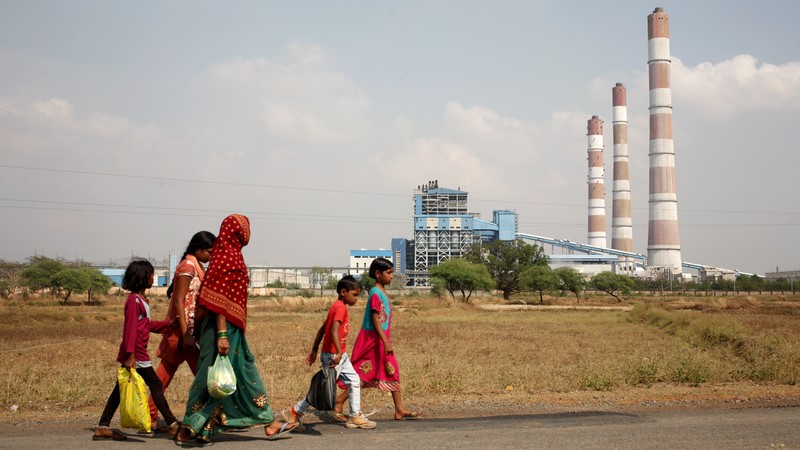 Women and children walk past the NTPC coal-fired power plants in Sipat in the central Indian state of Chhattisgarh (Photo: Sri Kolari / Greenpeace)

India “cannot escape” phasing down unabated coal power and setting out a clear roadmap for doing so, a top official in the coal ministry has said.

Anil Jain, India’s coal secretary, made the remarks while launching a report by the National Foundation for India (NFI) on the socio-economic impacts of weaning the country off coal.

“Now there is an international consensus. There is a goal: phasedown, which will happen. India is a signatory to that. I’m sure in the coming years the pressure will be to quantify the phasing down. We cannot escape that and nor does India intend to dilute its commitment,” he said.

India, backed by China, made a last-minute diplomatic push at the Cop26 climate talks in Glasgow to water down the language of the final agreement from calling for a “phaseout” of unabated coal power to a “phasedown”.

Prime minister Narendra Modi has promoted coal mine expansion, with plans to ramp up domestic coal production from 783 million tonnes in 2019 to one billion tonnes per year as part of his self-reliant India policy.

But analysts say the plans are incompatible with India’s strengthened headline climate targets for 2030 and 2070 net zero goal announced by Modi at Cop26.

The newly launched NFI report says the carbon neutrality goal alone “sounds the death knell for coal expansion in the country” and “puts India on a path to transition towards a cleaner greener economy”. But with millions of people dependent on the coal sector, NFI says India needs a transition plan.

Ashish Fernandes, a coal expert at Climate Risk Horizons, told Climate Home News negotiations in Glasgow forced India to confront the need to wind down the coal sector, which the government “has been reluctant to address head on”.

Signing up to the “phasedown” language was “huge progress” for a country where energy demand is expected to skyrocket, said Sandeep Pai, a senior research lead with the Just Transition Initiative.

“But there is no trajectory for India to decrease its coal use this decade,” he said. And the absence of a clear “phasedown” timeline means it leaves the text open to interpretation.

At the political level, the very idea of a phasedown is resisted. Environment minister Bhupender Yadav, who negotiated the language change in Glasgow, told an event that the term “phasedown” means India can decrease its share of coal in the energy mix but allow its coal use to rise in absolute terms.

The Delhi-based Council on Energy, Environment and Water estimates that to achieve net zero by 2070, India would need to peak its use of coal for power generation by 2040 and drop its overall usage by 99% by 2060.

For Fernandes, there is no space in India’s energy sector for the “all of the above approach” which Delhi has been pursuing, expanding both coal and renewable sources.

Instead, the government should be “more aggressively” shutting down old and inefficient coal power plants and commit not to build any new coal plants, said Fernandes.

NFI’s report is the first comprehensive analysis to map the scale of the transition across all of India’s coal-consuming industries.

It conservatively estimates that more than 13 million people – nearly the size of the population of Zimbabwe – depend on the coal economy, with people in 135 districts depending on two or more coal assets for their livelihoods.

That excludes those working in the informal sector that could grow the number to 20 million people impacted by the transition.

Not everyone will require the same support. It will be easier to rehabilitate skilled workers in the power sector than the low-skilled and poorly educated workforce in the brick sector, D’souza said. Bricks are made in coal-burning kilns.

The report finds that the government needs to prepare a timeline for closing coal assets that will start with mine closures.

In 2019, 94 open cast mines of the 420 coal mines in India were producing 85% of the country’s coal. Only 128 mines were making a profit. That means that underground mines, most of which are loss-making, will likely shut this decade, NFI found.

“There will be a phasedown for coal mines,” D’souza said. “But, in the medium term, we will definitely see an increase in the amount of coal consumption.”

Ultimately, achieving the transition hinges on a financing which doesn’t currently exist.

Coal secretary Jain said coal mining companies and employers could not be asked to foot the bill or they risked “deserting” the sector entirely.

NFI says India’s domestic resources won’t be enough to implement the transition and it will need to international support.

An $8.5bn transition package mobilised for South Africa could provide a model for India. But the report adds that it will require the government to determine how much money is needed to implement the transition and support existing workers.