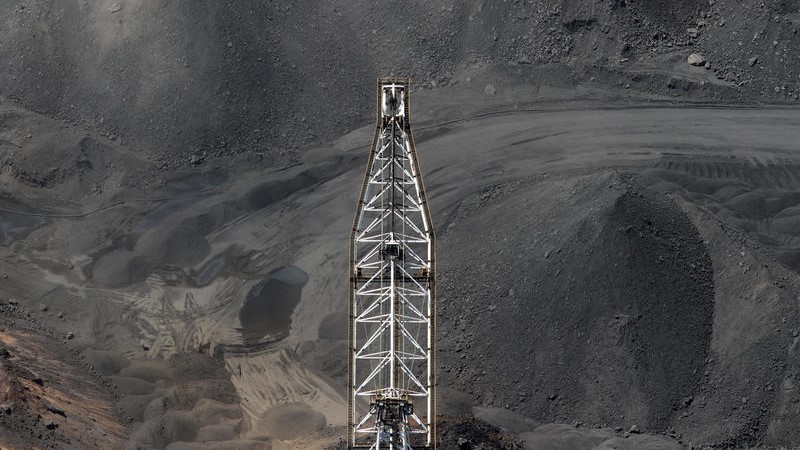 A mine drump and crane near the Kendle Power Station in Mpumalanga, South Africa (Photo: Ruth Sacco/Greenpeace)

A financial package to speed South Africa’s transition away from coal is creating a buzz at Cop26 climate talks, where campaigners hope it could provide a model for other emerging economies.

The nation is at the heart of a string of announcements in Glasgow, UK to support developing countries in ditching the most polluting fossil fuel.

After months of high-level political negotiations, France, Germany, the UK, the US and the EU announced an $8.5 billion package of grants and concessional finance over 3-5 years to accelerate the retirement of coal plants and the deployment of renewable energy.

“South Africa has consistently argued that developed economies must support a just transition in developing economies. [This] represents a first-of-its kind partnership to turn these commitments into reality, and a model for similar forms of collaboration globally,” he said.

“We’re witnessing the end of coal power in real-time,” Leo Roberts, research manager for think tank E3G’s coal transition team told Climate Home News. These announcements “point to a shift towards a world in which finance is available to help developing countries move away from coal”.

The partnership could be emulated by others amid a raft of commitments to ditch coal.

Indonesia, Vietnam and Chile are among 18 new countries that committed not to build or invest in new coal power and phase out coal plants in the 2040s .

Earlier this week, Indonesia’s finance minister Sri Mulyani Indrawati said the country could phase out coal power by 2040, with financial support from the international community. That is a major shift from its national climate submission to the UN earlier this year, which sees coal meeting 38% of electricity demand in 2050.

Like South Africa, Indonesia has communities dependent on coal mining, who could suffer from a transition to clean energy in the absence of economic regeneration.

For the first time, financial instruments are being put together to address the issue.

It is the first dedicated international fund to help developing countries exit coal, with funding from the US, the UK, Germany, Canada, and Denmark.

Indonesia, India, the Philippines and South Africa are the first beneficiaries of the scheme that aims to leverage private investments to support the transition from coal to clean energy. Together, they represent more than 15% of global coal-related emissions.

Duarte told Climate Home the fund aimed to address a gap in the financial architecture by providing support to reskill coal workers and social protection measures such as temporary income support to those losing their jobs.

“If we don’t provide this support, this coal phase out is probably not going to happen in time to meet our climate objectives,” she said.

The $8.5bn package is “groundbreaking”  because it was “co-created” by South Africa and donor countries, rather than imposed by wealthy nations, Maesela Kekana, South Africa’s climate change chief negotiator, told Climate Home News.

Kekana said environment minister Barbara Creecy had been lobbying the CIFs for a coal transition programme to be established.

“We were right at the forefront. We fought for that. That’s how important the ACT programme is for us,” he said.

“There’s nothing like this out there. It’s never been done before. And now we’re going to roll it out,” he said. “We are determined to make this work because we believe that this is a good model.”

South Africa pitched for the funds after debt-burdened state utility Eskom said it was seeking $10bn in international finance to help it shut most of its coal-fired power plants by 2050.

The country uses coal for 87% of its electricity generation and 20% of its liquid fuels, drawing on significant domestic resources.

UK climate envoy John Murton and a delegation from the US in September helped to seal the deal ahead of Cop26.

“That was a turning point in our view because we started to realise how serious these countries were. Everyone was working non-stop at the technical and political level to make it happen,” Kekana said.

With Eskom accounting for around 41% of the country’s emissions, decarbonising the electricity grid is a priority for South Africa to meet its climate goal. But the deal goes beyond cutting coal emissions to creating alternative, cleaner jobs and livelihoods.

Jesse Burton, an energy policy researcher focusing on the South African coal sector, said the package could help address some of the technical challenges of the transition, which have been impeded by Eskom’s huge debt.

“But how the pot of money is going to be carved out need to be ironed out. It’s can’t just be about rolling out renewables, it has to be about the just transition,” she said.