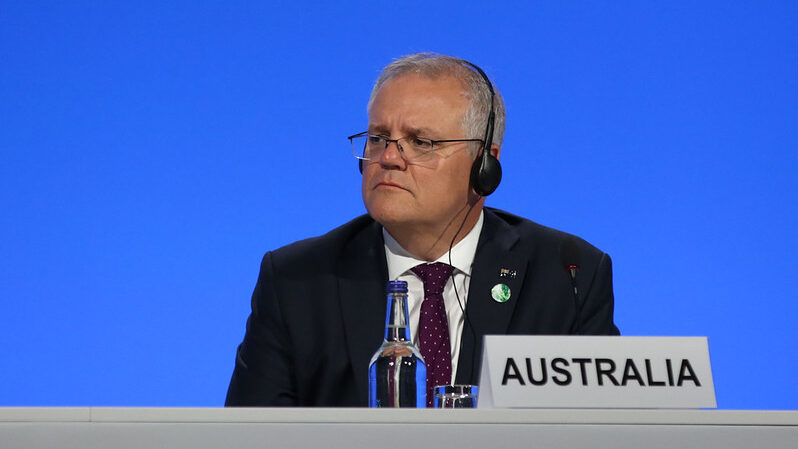 The Glasgow climate pact agreed on Saturday calls on countries to submit more ambitious 2030 climate plans by the end of 2022, but major emitters such as Australia are already saying it doesn’t apply to them.

Under the agreement from Cop26, countries are asked to “revisit and strengthen” their 2030 climate plans by the end of 2022 to align with the Paris temperature goals, “taking into account different national circumstances”.

The onus is on climate laggards such as Australia, China, India, Brazil and Russia, whose targets are all ranked as “highly” or even “critically insufficient” to meet the Paris Agreement goals by Climate Action Tracker (CAT). CAT analysis suggests that current policies put the world on course for 2.7C heating, an 0.2C improvement compared to last year but far from the 1.5C aspirational target of Paris.

Australia, the biggest laggard among rich nations, has already made it clear that it has no intention of strengthening its 2030 plan, which aims to reduce emissions by 26-28%, compared to 2005 levels. If all other countries followed a similar trajectory, it would set the world on a path for 4C of warming, according to CAT.

In a statement released just one day after the negotiations finished, Scott Morrison’s government said: “Australia’s 2030 target is fixed and we are committed to meeting and beating it, as we did with our Kyoto-era targets.”

During an interview with Australian media, the country’s deputy prime minister Barnaby Joyce said “we are happy with our 2030 targets… they are fixed.” When asked why his government adopted the pact, he said: “I didn’t sign it, I wasn’t there.”

Kevin Rudd, Australia’s former prime minister and president of the Asia Society, condemned the remarks, saying: “Countries like my own have not simply been granted a leave pass to do nothing for another five years — and they will now need to come back to the table by Cop27 next year.”

The climate minister of New Zealand, which has a “highly insufficient” 2030 climate target of 30% compared to 2005 levels, has also said they have no intention of revisiting it. James Shaw told national media that the pact encouraged countries to revise their targets, “but it doesn’t mean you have to”.

Shaw said: “There are some countries including the larger emitters, that didn’t upgrade their commitments and so that piece of language is really aimed at those countries.”

India is the biggest emitter not to have submitted an updated nationally determined contribution (NDC, in the UN climate jargon) to the Paris Agreement ahead of the Glasgow talks.

Prime minister Narendra Modi announced stronger targets in Glasgow, but has yet to formalise them – and national media later quoted an official saying the increased ambition was contingent on rich countries suppling $1 trillion of finance.

Others like China, Russia  and Brazil went through the motions of updating their NDCs but with no strengthening of headline targets.

“Only 25% of the emissions gap [to 1.5C] has been closed by the enhanced NDCs,” Deborah Ramalope from Climate Analytics told Climate Home News. “Most major emitters have the capabilities to aim higher,” she said, adding that new finance would help unlock ambition from countries such as India and Indonesia.

One emerging economy that significantly increased its ambition before Cop26 was South Africa, boosted by an $8.5 billion package of support to reduce its reliance on coal.

“What we will need to see next year to enable any of the big emerging economies to come forward with more ambitious targets is more confidence that the finance they are going to need to implement those shifts will be available,”  Alex Scott, E3G’s climate diplomacy programme leader, told Climate Home News.

The UK presidency has a key role to play over the next year to make it politically feasible for countries to increase their targets, said Scott.

Ahead of Cop27 in Egypt next year, the presidency should create “spaces for conversation” not just on emission reduction but also on developing country priorities like finance for climate-induced losses, added Scott, “so that when countries come together in Egypt they are able to have a serious dialogue on what finance looks like, rather than it ending up being a talking shop.”

A spokesperson for the Cop26 presidency did not respond to Climate Home’s questions.

Cop26 president Alok Sharma told reporters: “This is an international agreement. All countries have signed up to this. Every country will be judged by whether or not they stick to the commitments they made.”