The package agreed at Cop26 cites coal in a UN first and finalises the Paris Agreement rulebook, but is weak on finance for vulnerable nations 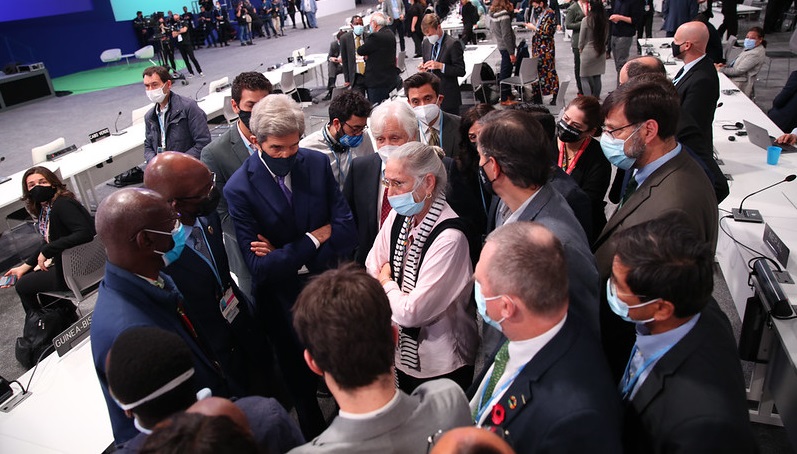 After a series of tense huddles, more than 24 hours into overtime, the gavel went down on a climate deal in Glasgow, UK on Saturday evening.

The Glasgow Climate Pact refers to coal for the first time in the UN process. It asks countries come back with stronger climate plans in 2022. And it finalises the most contentious elements of the Paris Agreement rulebook, six years after the landmark deal was done.

What it doesn’t do is meet calls for climate reparations, to the dismay of developing countries. A proposal for a finance facility to help victims of the climate crisis was quashed by the US and other rich nations, as was a call to earmark a share of carbon trading revenues to fund adaptation.

Addressing the plenary before the text was adopted, US climate envoy John Kerry said: “There is some discomfort. Well, if it’s a good negotiation, all the parties are uncomfortable. This has been a good negotiation.”

For China, India and big emerging economies, the compromise was accepting language around 1.5C, coal and fossil fuel subsidies despite concerns it could inhibit their development – and a grievance against historic polluters taking up most of the carbon budget.

India’s environment minister Bhupender Yadav forced a concession at the last minute, getting a reference to the “phase-out” of coal power changed to “phase-down”. That echoed the wording China agreed to in a bilateral agreement with the US.

Tina Stege, of the Marshall Islands, told the plenary of her “profound disappointment” about the change. “We accept this change with the greatest reluctance. We do so only because they are critical elements in this package that people in my country need as a lifeline for their future,” she said.

Cop26 president Alok Sharma said: “I apologise for the way this has unfolded and I am deeply sorry.” Pausing to fight back tears, he continued, to applause from the crowd, “I think it is vital that we protect this package” before, hearing no objections, he banged down the gavel.

Vulnerable countries also expressed dismay at the incremental progress on scaling up funding to respond to the impacts of climate change. They had to make do with a body to provide technical assistance and a “dialogue” on loss and damage.

Before the plenary started on Saturday afternoon Kerry and veteran US climate lawyer Sue Biniaz roamed the meeting hall. Their longest and most animated discussions were in a huddle with Ahmadou Sebory Toure, the lead negotiator for the G77+China group of developing countries.

Yet Toure appeared to emerge empty handed. A source in the G77 said the African group had threatened to reject the package, but small islands talked them out of it.

Speaking in the meeting, while Biniaz pored over texts, Gabon’s environment minister Lee White said one of Africa’s red lines had “been rubbed out with no compromise”.

“The [African Group] is quite unhappy,” the source said. “Aosis [group of small island states] managed to convince the rest of the blocs to revisit the issue in Egypt. For now, they believe this is the best deal we can have out of Cop.”

After the meeting, Kerry strode over to Toure and they exchanged a fistbump before walking off talking with Kerry’s arm around Toure’s shoulder.

The UK presidency’s stated aim for the conference was “to keep 1.5C alive”, referring to the most ambitious global warming limit in the Paris Agreement.

Announcements last week including India aiming for net zero by 2070 and a widespread agreement to reduce methane emissions led the traditionally cautious International Energy Agency to say that global warming could be held to 1.8C.

Others urged caution. Climate Action Tracker projected current policies put the world on a path to 2.7C warming and strengthened emissions targets for this decade could bend the curve to 2.4C. More optimistic assessments rely on long term – and therefore uncertain – targets.

The carbon trading rules agreed in Glasgow, while stricter than some parties wanted, risk diluting ambition, critics warned. “We have much to do to stop companies and countries gaming the system,” said Rachel Kyte, co-chair of an initiative to boost the integrity of voluntary carbon markets. “We have no room or time for markets like buckets of water, with 100 tiny holes.”