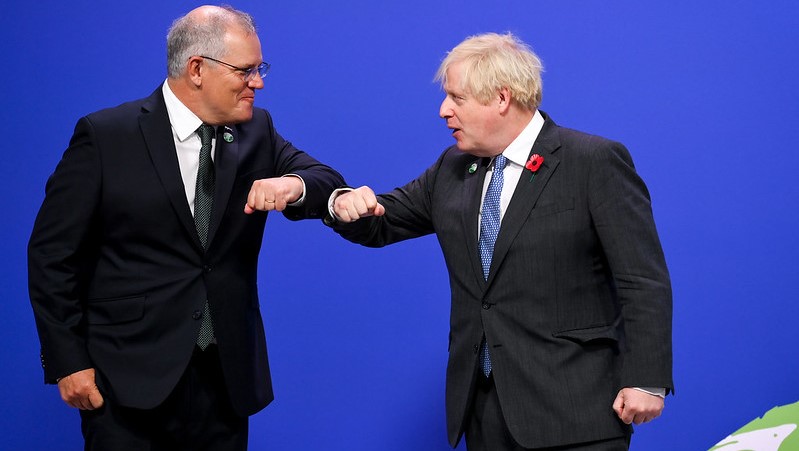 A draft agreement at Cop26 climate talks in Glasgow, UK, calls on countries to accelerate the phaseout of coal and fossil fuel subsidies, in a potentially groundbreaking move.

The document published early on Wednesday morning includes what would, if adopted, be the first explicit reference to coal and fossil fuels in the UN Climate Change process.

It “calls upon Parties to accelerate the phasing-out of coal and subsidies for fossil fuels” without providing a timeline for doing so.

Fossil fuel is a politically loaded term in the UN climate discussions and is not mentioned in the Paris Agreement. Countries agreed to cut emissions without naming the source of those emissions.

“The question is will it stand?,” Helen Mountford, vice president for climate and economics at the World Resources Institute, told a briefing, suggesting there would be strong push back from large fossil fuel producing nations.

Strong pushback is expected from countries with big coal, oil and gas interests like Australia and Saudi Arabia.

The inclusion of coal phaseout language in the draft follows more than 40 countries signing a statement promising to phase out coal in the 2030s for major economies and 2040s for developing countries. But several members had little coal to start with, while big miners and consumers like Australia, China, Japan and India did not join. At least two signatories, Poland and South Korea, later backtracked on the pace of the transition.

Energy minister Angus Taylor told Cop26 last week that the Australian government’s focus was “not on wiping out industries”.

China has committed to end its overseas financing for coal but has not set an end date for domestic coal use. And Beijing pushed back against language to signal an end to coal power during G20 discussions last month.

The Alliance of Small Island States (Aosis) has backed the inclusion of fossil fuel subsidy phaseout language in the text, saying major economies should do so by 2023.

In 2009, G20 countries agreed to phase out “inefficient” fossil fuel subsidies. But since the Paris accord was signed in 2015, the G20 has poured $3.3 trillion into subsidies for coal, oil and gas, according to analysis by Bloomberg NEF.

Lia Nicholson, of Antigua and Barbuda, lead negotiator for Aosis, told Climate Home News the group’s position “has definitely been heard” and received support “from some strong allies,” including a G7 country.

“Aosis’ stance on the phase out of fossil fuel subsidies by 2023 is not extreme or radical. It is simply what the seriousness of our situation calls for. Wilfully going down the path of business as usual, knowing what we know, is what is actually radical,” she said.

Italy, a G7 member and president of the G20 this year, pushed for the group of major economies to agree to end fossil fuel subsidies by 2025 but could not get consensus.

Jennifer Morgan, executive director at Greenpeace, told reporters the call for fossil fuel phase out in the draft text was “a small step forward and we need to see more there”.

“I expect this to be a very contentious paragraph… and one to be going down to the wire,” she said. “Having a 1.5C goal and not connecting that to what that means for fossil fuels in the future is an incomplete outcome. This is a major space to watch over the coming days.”

The draft text recognises that holding temperature rise to 1.5C this century – the most ambitious goal of the Paris Agreement – requires reducing emissions 45% by 2030 compared with 2010 levels and “to net zero around mid-century”.It urges countries to “revisit and strengthen the 2030 targets in their nationally determined contributions, as necessary to align with the Paris Agreement temperature goal by the end of 2022”.

Vulnerable nations have pressed for the summit to agree on a clear time for countries, and particularly major economies, to come back with more ambitious plans in line with 1.5C before the next ambition round in 2025. The text goes some way towards meeting their demands.

But “the question is: can you say much more clearly and crisply that 1.5C is in fact what parties are aiming for,” said David Waskow, of the World Resources Institute.

The latest round of pledges are bending the temperature curve but remain way off track to limiting global heating to 1.5C.

If implemented in full, national 2030 climate pledges and policies put the world on course for 2.4C, according to analysis by Climate Action Tracker. This figure narrows to 2.1C when binding long term targets are counted and 1.8C in the most optimistic scenario.

Analysts have raised concerns that the text is imbalanced between efforts to cut emissions and progress on delivering on the priorities for developing countries, particularly on finance and adaptation support for countries on the frontline of the climate crisis.

The G77 plus China bloc, which speaks for 134 developing countries, warned on Wednesday that they “remain extremely concerned with the lack of progress on finance issues”.

“There is no appetite from our partner to discuss our mandate to work on the definition of climate finance”, the group’s spokesperson Ahmadou Sebory Toure told the Cop26 stock-taking plenary.

“On one side of the scales, [the draft text] advances a detailed process for accelerating climate mitigation goals, but, on the other side of the scales, on finance and loss and damage, it is fuzzy and vague,” said Mohamed Adow, director of Power Shift Africa.

The draft text landed as UK prime minister Boris Johnson and UN chief Antonio Guterres were due to return to Glasgow to “energise” the negotiations, according to a UK official.

Cop26 president Alok Sharma told reporters on Tuesday that any decision on the cover text would require negotiating teams to consult with their capitals, and potentially calls between world leaders.