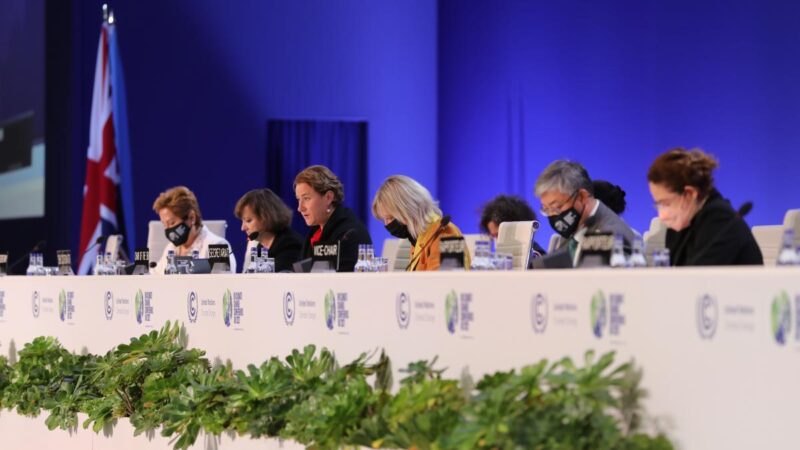 Developing countries have accused wealthy nations of avoiding substantive talks on a new collective finance goal to help them confront climate change from 2025.

Discussions on finance at the Cop26 climate talks in Glasgow got off to a difficult start after it was revealed donors won’t meet a long overdue collective goal to mobilise $100 billion a year before 2023 – three later than they committed.

While the twelve-year old goal remains unmet, countries are starting to discuss a new collective finance goal from 2025. African nations are calling for at least $1.3 trillion to be mobilised every year for the rest of the decade, meeting certain quality criteria.

Ahmadou Sebory Toure, lead climate negotiator for Guinea, who spoke on behalf of the group of 77 developing countries and China, told the plenary that “adequate and reliable finance” is a precondition for vulnerable nations to increase their goals.

“A Cop without a concrete outcome on finance can never be successful. Finance is an enabler for ambition in developing countries,” he said.

Support for vulnerable nations could ‘make or break’ Cop26 talks

The African Group of Negotiators and a group of 24 “like-minded” developing nations, which includes China, India, Indonesia, Pakistan, Saudi Arabia and Vietnam, have called on donor nations to mobilise at least $1.3 trillion per year by 2030, with an equal 50/50 split between money for carbon-cutting and adaptation efforts and at least $100bn delivered as grants.

Developed countries have resisted going into the details of the new finance goal, arguing that the decision taken in Glasgow should be limited to a procedural way forward for a decision to be made by 2024.

“We are disappointed that developed countries are not willing to discuss long-term climate finance matters,” Toure said. “A process that focuses on workshops without clear objective or vague discussions until 2024 is not acceptable.”

His comments were echoed by an Indian diplomat speaking on behalf of the Basic group that represents India, Brazil, South Africa and China.

“This is a simple ask from many developing countries parties yet what we are getting is more workshops and in-session seminars to discuss the new goal,” she said.

The UK presidency insisted that “good progress” was made on finance issues, with UK lead negotiator Archie Young telling the plenary that countries were “able to engage on substance on all issues”.

One of the critical questions for developing countries is what this new finance goal should look like. Vulnerable nations have called for the inclusion of sub-targets for funds for adaptation and loss and damage.

The $100bn was the sole responsibility of a list of developed countries drawn up in the early 1990s. Some are pushing to expand the donor base to include upper middle income countries such as China, South Korea, Mexico and Arab states that are already voluntarily contributing climate aid but have no legal obligation to do so or to report it to the UN.

The Paris accord states that developed countries “shall provide financial resources to assist developing countries”. It adds that other parties are encouraged to do so voluntarily with rich nations to “take the lead in mobilising climate finance… as part of a global effort”.

Lorena Gonzalez, a senior associate on climate finance at the World Resources Institute, told Climate Home News “there are growing tensions” over who should contribute to the post-2025 finance goal. Naming a number now was “premature,” she said, as it should be based on a transparent process to assess need.

Climate Home understands that a draft text on the new goal includes a mention that countries “in a position to do so” should put more money on the table. The wording is backed by South Korea, which announced a further $3 million of international climate finance in Glasgow.

But Delhi is strongly resistant to having its voluntary aid formalised under UN Climate Change processes.

On behalf of the Basic group, an Indian diplomat said: ”The responsibility of climate finance remains that of developed countries towards developing countries.”