Support for vulnerable nations could ‘make or break’ Cop26 talks

As ministers arrive in Glasgow to broker a political deal, a lack of aid for those on the front lines of climate impacts is a sore point 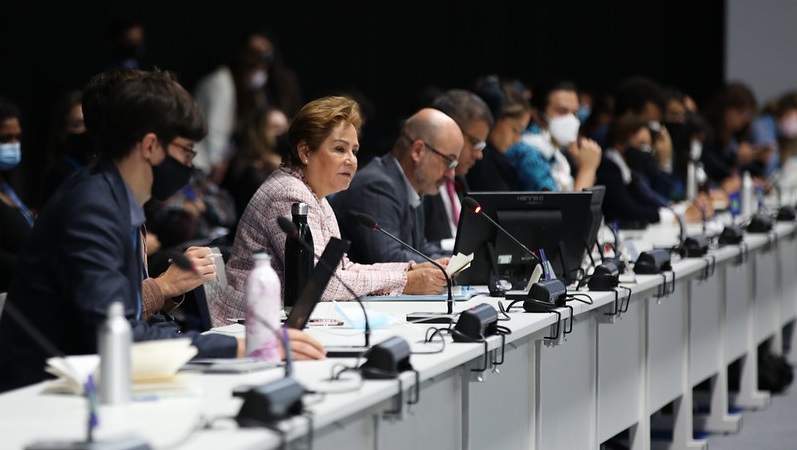 Slow progress on support for vulnerable countries to cope and recover from intensifying climate impacts is setting the scene for tough negotiations in the second week of the Cop26 climate talks.

Diplomats worked through the night on Friday to make headway on some on the last unresolved issues of the rules to implement the Paris Agreement.

But there were still a wide range of options on the table for the most contentious issues, including establishing common rules for a global carbon market, on whether climate plans should cover a five or 10 year timeframe and on the transparency process for reporting progress.

Ministers arrive in Glasgow for week two to broker a political deal. Their ability to reach consensus hinges on all countries feeling their concerns are taken seriously – and support for those on the frontline of climate impacts is a weak link.

Cop26 president Alok Sharma told reporters on Saturday: “Over the last week, I have discussed adaptation finance with a number of countries and I hope we will be able to make progress next week.”

But Matthew McKinnon, a spokesperson for the Climate Vulnerable Forum, which represents 48 developing countries, told Climate Home News discussions on support for those on the frontline of the climate crisis were “not progressing enough”.

While there has been a flurry of pledges on phasing out coal and cutting emissions in the first week of the UN climate conference, announcements on helping developing countries adapt and respond to droughts, flooding, cyclones and sea level rise have been less forthcoming.

The UK presidency has made adaptation, loss and damage the theme for Monday. But it’s unclear what wealthy nations will bring to the table. Unlike with days dedicated to finance and energy, no major announcements have been trailed in advance.

Jennifer Tollmann, of think tank E3G, told Climate Home News what happens on Monday could “make or break” the deal.

The US said this week it would dedicate $3 billion annually for adaptation finance by 2024 pending approval by Congress. That alone won’t be enough to reassure vulnerable nations, which have grown increasingly frustrated with the lack of high-level attention adaptation receives.

They are calling for at least a doubling of adaptation funds to help them cope with climate impacts.

On top of adaptation finance, developing countries are calling for additional and dedicated funds to help them recover from loss and damages caused by climate impacts affecting them now – following a precedent set by Scotland at the start of the talks.

“We need to establish a financing mechanism for those that are losing the most,” Aiyaz Sayed-Khaiyum, Fiji minister for the economy and climate change, told reporters on Friday.

“This needs to go beyond access to insurance and risk transfer arrangements to have the impact required and it must be additional and separate to the annual financing target.”

Frances Fuller, of Antigua and Barbuda, an advisor to the Alliance of Small Island States (Aosis), told Climate Home: “We’ve certainly be having some challenges there,” citing push back from donor countries.

From Chile and Taiwan via Glasgow, youth call for climate justice

What wealthy nations deliver on Monday in support for vulnerable ones will “set the tone for how things progress in the week,” said Fuller. “Finance is a critical part that has not made as much progress and we’d like to see some more there.”

The fact that wealthy nations arrived at the talks not expecting to meet a long-overdue commitment to mobilise $100bn a year from 2020 before 2023 put finance discussions on a back foot.

In a submission to the UN on Friday, the African Group of Negotiators (AGN) called out donor countries that haven’t reported on their climate finance provisions to do so by next year.

“It’s pretty clear that we are so far off the $100bn. I say so far off because it is about the quality [of the finance] as well,” said Fuller.

Developing countries have repeatedly called for a 50/50 split between adaptation and mitigation finance. But in 2019, only a quarter of all finance went to help communities adapt to climate impacts.

“In 2021, we are a lot further behind than we need to be. The response to the challenges that small island developing states are facing is entirely inadequate,” Fuller said.

Inside the negotiations, talks on a post-2025 climate finance goal and on defining a global goal on adaptation have been difficult.

Some donor countries are resisting a tighter definition of climate finance, including specific targets for grants as opposed to loans and sub-targets for adaptation or loss and damage.

This lack of predictability of long-term adaptation finance flows is holding hostage parts of the negotiations on carbon markets.

The African Group of Negotiators is demanding a share of revenue from carbon trading deals between countries go to the Adaptation Fund. But the US strongly opposes it, slamming the proposal as a tax.

“The whole world is suffering from climate impacts… it’s not just an African issue,” Mohamed Adow, director of NGO Power Shift Africa, told Climate Home. “It’s in our own interest to detoxify these negotiations and collectively build resilience.”