The Cop26 presidency is considering a proposal to strengthen ambition beyond the Glasgow summit, but it faces resistance from emerging economies 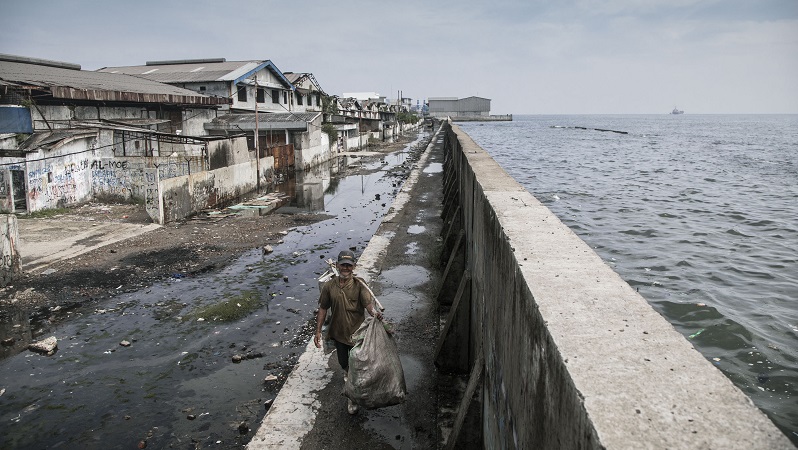 A man walks on top of a giant sea wall along the coastal area of Jakarta, Indonesia (Photo: Irene Barlian / Climate Visuals Countdown)

It is already clear, before Cop26 has begun, that the gap between climate ambition and action won’t be closed in Glasgow.

If countries meet their 2030 emission targets in full, global heating could be limited to 2.6-2.7C this century, according to the UN Emissions Gap report. Collective ambition needs to be seven times higher to align with the most ambitious 1.5C goal of the Paris Agreement.

So the UK Cop26 presidency is considering a proposal for the final Glasgow outcome to demand another round of updated nationally determined contributions (NDCs) by 2023.

It is backed by Christiana Figueres, former head of UN Climate Change and architect of the Paris deal. “At Cop26… there has been to be a clear agreement that governments will come back in 2023… to guarantee that we are on a path to 1.5C,” she said in a press briefing.

But the idea is meeting resistance from emerging economies, who want more support to meet existing targets before rewriting them.

“This talk of another round of [climate plans] will just feed into the hot air which is already plenty in the Cop process,” Pakistan’s climate minister Malik Amin Aslam told Climate Home News.

“The huge gap between what is already in the NDCs and what is actually being implemented needs to be plugged instead of another round of updating NDCs. Let’s talk climate action and not bureaucratic and endless updating of meaningless NDCs.”

Under the Paris accord, countries agreed to ratchet up their plans, or nationally determined contributions (NDCs), every five years. But vulnerable and progressive nations argue that waiting until 2025 to step up ambition is too late to keep 1.5C in reach.

Instead, they argue that countries should revise their plans “as soon as possible and ahead of the global stocktake in 2023,” when UN Climate Change is due to formally take stock of all progress made in meeting the Paris goals.

The UK has made keeping 1.5C within reach this decade the overarching objective for Cop26. While the gap to 1.5C won’t be closed in Glasgow, the hosts want to emerge with a plan for further tightening ambition.

The issue has been gathering steam since a ministerial meeting in July. In a letter to all parties ahead of the Glasgow summit, Sharma said countries will need to agree on a “roadmap for strengthening 2030 NDCs as necessary ahead of, and through, the global stocktake in 2023.”

The Climate Vulnerable Forum, which represents 48 nations on the front line of climate impacts, is going even further with a call for annual updates to NDCs until 2025.

Jennifer Tollmann, a senior policy advisor at think tank E3G, told Climate Home News there is “a real-world need to improve NDCs before 2025,” explaining that “we need at least seven years to make the appropriate economic and investment decisions” to halve emissions this decade.

The UK recognised that asking countries to step up their carbon-cutting efforts again in the next two years also required action on adaptation and financial support to the developing world. That could include a commitment for climate finance to be evenly split between adaptation and mitigation for example.

In a policy note shared with leaders taking part in a high-level summit at Cop26, and seen by Climate Home, the UK called on heads of government to give negotiators “a clear direction” to agree on a pathway that accelerates action this decade.

But for Esther Tamara, a researcher at the Foreign Policy Community of Indonesia, the lack of finance for developing countries will be “a huge stumbling block” to agree to more climate efforts.

On Monday wealthy nations announced that they won’t meet a long-overdue commitment to mobilise $100bn a year between 2020 and 2025 before 2023 –providing developing countries with no means or incentives to up their targets.

“I don’t think the Indonesian government will respond to another round of NDCs so soon positively. Even now, we can see Indonesia is dragging its feet to pursue transformational climate commitments and emissions reductions target,” Tamara told Climate Home.

Meanwhile the Indian government is unlike to agree to anything more ambitious until “it sees money on the table,” Navroz Dubash, professor at the Delhi-based Centre for Policy Research, told Climate Home.

Like Pakistan and Indonesia, India is a member of a group of “like-minded” developing countries that emphasises the historic responsibility of rich countries to cut emissions deeper and faster. In a statement last week, the group accused the Cop26 host of going “against climate justice” by calling on all to set mid century net zero targets.