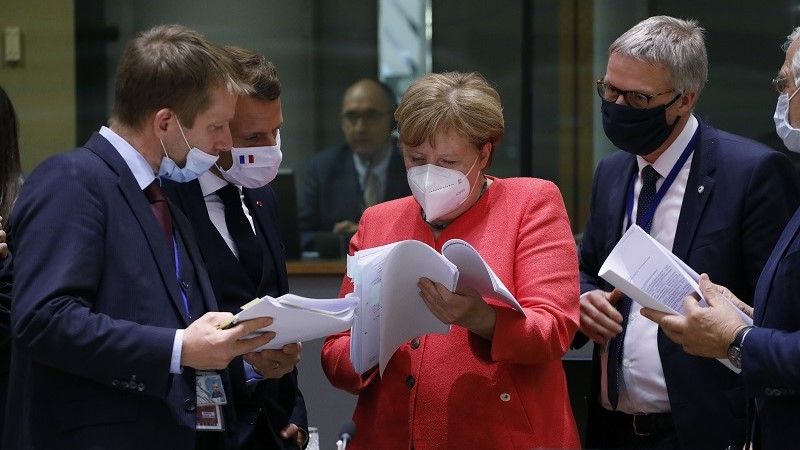 The European Union is embarking on critical negotiations this week to increase its climate ambition and deepen its emissions cuts to 2030.

Setting out the priorities for the year ahead, European Commission president Ursula von der Leyen is expected to propose an increase of the union’s emissions reductions target to at least 55% from 1990 levels – up from 40% currently – in a major speech to the Parliament on Wednesday.

In a leaked draft of the proposal, the Commission argues 55% reductions are “both economical feasible and beneficial for Europe” that will form part of a “balanced, realistic and prudent pathway” to achieve the EU-wide objective of climate neutrality by 2050.

As Brussels seeks to press ahead, European lawmakers and political leaders are bracing themselves for a political fight over the level of ambition and how effort is shared in the coming month.

Members of the EU Parliament’s environment committee have called for even deeper emissions cuts of 60% by 2030 – a proposal backed by progressive political groups and which all lawmakers will vote on in October.

Meanwhile a small group of eastern European member states led by Poland, and still largely dependent on coal for electricity, is expected to resist tougher commitments.

In a letter to the EU Commission in July, the environment ministers of Bulgaria, Czechia, Hungary, Poland, Romania and Slovakia demanded the new 2030 target be “realistic” and take into account “the real social, environmental and economic costs” of moving away from fossil fuels.

“This will be a major battle for Poland,” one Polish source told Climate Home News.

Poland remains the last hold-out to the EU’s climate neutrality goal, which every other country agreed to last year. But another national derogation for Poland risks undermining the EU’s credibility, showing it is unable to bring onside the country facing the most challenging transition.

For the EU to agree to 55% of emissions cuts by 2030 “is important in the international context,” Manon Dufour, an expert in European climate policy and politics at think tank E3G, told Climate Home News, adding any weaker ambition “would be a disappointment to the rest of the world”.

Under the Paris Agreement, countries are due to submit updated climate pledges to the UN before the end of the year. However with President Donald Trump opting the US out of the pact, the world’s top emitter China is showing no urgency. A higher 2030 target is essential for the EU as it seeks to leverage greater climate action from Beijing in ongoing bilateral talks.

Another sticking point is the use of carbon sinks to meet the new target. Under the leaked proposal, and for the first time, carbon sucked from the atmosphere and stored by restored forests and soils would count towards meeting the 55% emissions reduction goal – a move opposed by progressive lawmakers, who argue it weakens the overall objective.

Estimates by German research groups have found the inclusion of natural carbon removals in the target would allow countries to reduce their carbon-cutting effort by five or six percentage points.

Bas Eickhout, Dutch MEP and vice-chair of the Greens political grouping, told CHN the party would back a 55% reduction goal “if it’s an absolute reduction”. “We would be really disappointed if the target is weakened by removals,” he added.

“It’s not a good look,” agreed Pieter de Pous, who leads E3G’s coal transition work in Europe, adding it would make it easier for conservative lawmakers to back the increased target.

And it’s unlikely to be enough to bring Poland onside, with Warsaw expected to demand further support from the EU.

“We need to fully understand the risks and the costs of an increased target… and how to overcome it,” a spokesperson for Poland’s climate ministry told CHN in an email. “Member states have different national circumstances and starting points, therefore, the challenge will be different for each one of them. Some of them, like Poland, will require support.”

The Polish government acknowledges an energy transition is inevitable. In a draft energy policy to 2040 published last week, it forecast coal’s share of electricity generation falling from 74% to 37-56% in 2030. But the document makes no reference to Brussels’ climate targets.

Under pressure at home from a surge in support for the Greens, Germany’s ruling conservative-socialist coalition has made agreeing an enhanced 2030 climate target a priority of its rotating presidency of the EU Council, which it holds until the end of the year.

A climate advisor to the German government told CHN the big political fight will happen between heads of states, with much depending on what German Chancellor Angela Merkel is ready to offer Poland.

Political analysts suggests this could take two forms: a provision for Poland not to have to cut carbon as fast as other member states, or more money to accelerate its energy transition. This could include additional revenue under the EU’s Emissions Trading Scheme or the Just Transition Fund, which was designed to help member states reach the 2050 carbon neutrality goal.

Comment: Why we no longer use the phrase ‘brown finance’

Warsaw is already eligible for 50% of its allocated transition funds despite having no plan to exit coal or commitment to the bloc’s 2050 goal. But analysts say negotiations on the fund’s allocation could be re-opened in the context of the 2030 target.

For De Pous, of E3G, this was a risky bet for Poland, which has already made the case it needs EU funds to build its climate ambition but has little to show for it.

“Countries could say to Poland: ‘if you are unwilling to sign up to a higher 2030 target, there is no need for you to have any more money’,” he said.

But Green MEP Eickhout told CHN Poland could have “many cards to play” and get “quite original” in its demands for agreeing to higher 2030 ambition, suggesting it could put pressure on Merkel to scrap a contentious gas pipeline from Russian to Germany, known as Nord Stream 2.

Sanjeev Kumar of Change Partnership, a non-profit focused on climate politics, said “how much of Germany national politics is going to translate into European politics” could influence the outcome of the negotiations.