Justin Trudeau promised to make climate action a “cornerstone” of Canada’s coronavirus recovery plan, but has yet to win the backing he needs in parliament 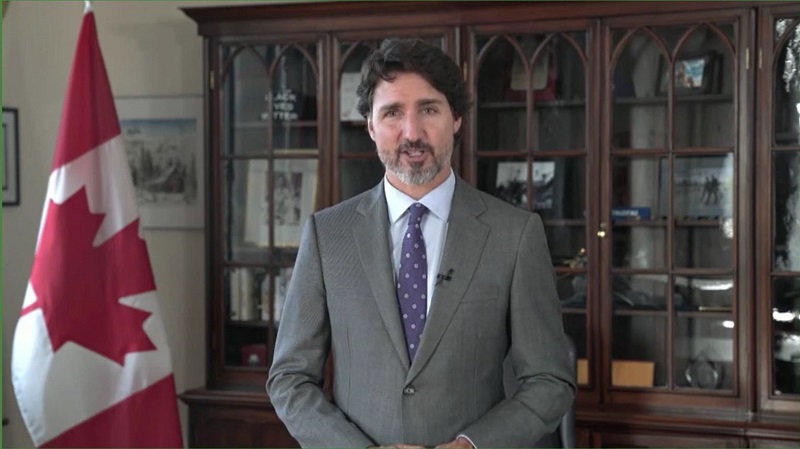 Justin Trudeau is staking his premiership on a plan for Canada to “build back better” from the novel coronavirus pandemic.

In a lengthy speech to lawmakers setting out the minority government’s vision for a new parliamentary session on Wednesday, Trudeau promised to “immediately” release plans to strengthen the country’s 2030 climate targets and legislate to achieve carbon neutrality by 2050.

“Climate action will be a cornerstone of our plan to support and create a million jobs across the country,” Trudeau said. “We can create good jobs today and a globally competitive economy not just next year, but in 2030, 2040, and beyond.”

But the speech, which on climate largely repeated existing pledges, was not enough for the opposition parties he needs to pass legislation.

Mired in a conflict of interest scandal and having lost his majority in an election last year, Trudeau gambled on a political reset and the promise of a green recovery to Covid-19 when he ended the parliamentary session last month.

Trudeau is now facing a confidence vote on his vision for the future and a possible election if he fails to gather support.

For his administration to survive, Trudeau needs the support of at least one opposition party, the nationalist Bloc Québecois or the left-leaning New Democratic Party (NDP). The Conservatives have ruled out any support for the government. A date for the vote has not yet been set.

Catherine Abreu, executive director of NGO Climate Action Network Canada, told Climate Home News that while the speech “struck the right tone on climate justice” no new climate or environment policies were announced. “Is it a revolutionary green recovery for Canada? No,” she said.

However, she described the government’s efforts to link climate policies and social issues as “a progressive” step forward for the Canadian government.

“Of course, we’ve heard similar promises before from this government. It is the policy and investment decisions made in the coming months that will determine whether the spirit articulated in this historic speech is turned into meaningful action,” she said.

At the event, the UN and the UK set out plans for an online summit to mark the fifth anniversary of the Paris Agreement on 12 December.

The anniversary has been billed as a key moment for countries to come forward with enhanced ambition, giving Trudeau an opportunity to flesh out the plans on the world stage if he survives the confidence vote.

He promised to use corporate tax cuts to make Canada “the most competitive jurisdiction in the world for clean technology companies”.

Trudeau said the government would continue implementing a carbon tax, which puts a price on pollution, against vehement opposition from the Conservatives.

He made no mention of oil and gas, nor of the government’s controversial support for the expansion of the Trans Mountain pipeline, which channels crude oil from Alberta to the coast for exports.

He slammed the plan as “vague” and lacking on detail. “Where is the notorious green recovery? It is nonexistent in this throne speech,” he said in an interview with the Canadian French-language ICI RDI, adding the plan did not exclude further support to the oil and gas industry.

Blanchet said Trudeau had a week to answer the Bloc Quebecois’ core demand to transfer provinces more autonomy on healthcare, or it would vote against the Liberal government.

NDP Leader Jagmeet Singh said his party support was conditional on ensuring Canadians who cannot return to work because of the pandemic continue to receive the same level of support from the government and paid sick leave is available to all.

Isabelle Turcotte, director of federal policy at the Pembina Institute, said the government had demonstrated that it saw protecting people’s health, building a resilient economy, and taking strong action on climate change “as different pieces of the same puzzle”.

“We’ll be closely watching for the details on implementation, accountability, and the scale of effort,” she added about Trudeau’s commitment to deepen carbon-cutting efforts.

In a statement, Climate Strike Canada, a network of students and climate activists, said the speech was a missing opportunity to lay out a bold vision for tackling the climate emergency.

“The Liberal government has failed to take action at the scale we need to address the climate emergency,” it said, saying young people would take to the streets on Friday, joining a global protest for climate action.