Warsaw can get EU money allocated for greening the economy, despite having no plan to exit coal or commitment to the bloc’s 2050 net zero emissions goal 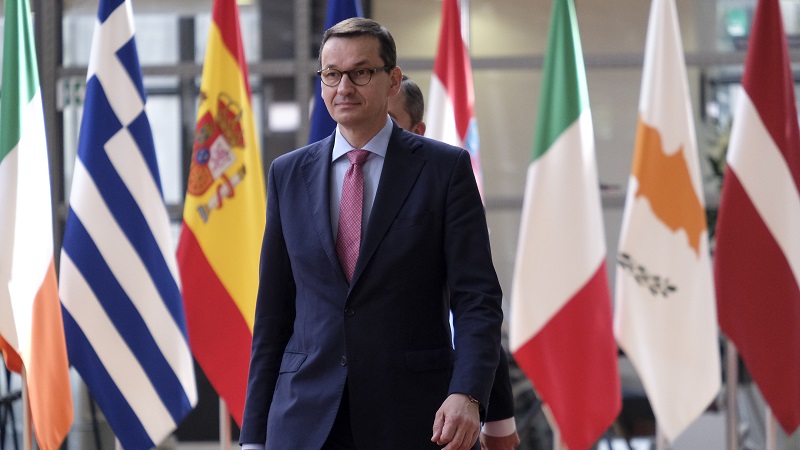 Poland  has been given a green light to access EU money designed to reach the bloc’s 2050 carbon neutrality goal – without having signed up to the target.

While the Polish government announced a bailout for its ailing coal mining sector at home, prime minister Mateusz Morawiecki watered down climate conditions on EU funds during a marathon meeting in Brussels.

In the early hours of Tuesday morning, EU leaders agreed on the structure of a historic €1 trillion budget to 2027 and a €750 billion recovery package from Covid-19 – 30% of which is to be spent on climate-related projects. The details still need to be thrashed out by European lawmakers and ministers.

The deal follows five days of acrimonious debate. The key battlegrounds were the proportion of grants versus loans in the recovery package and conditions on climate goals and the rule of law.

The final agreement links the budget and recovery package to the EU commitment to achieve climate neutrality by 2050 and to contribute to the 2030 emissions target, which EU leaders agreed “will be updated before the end of the year”.

Johanna Lehne, a policy advisor at think tank E3G who has been following the EU Council meeting, told Climate Home News, the deal “paves a way for a green and resilient recovery,” but “it also lost some of its climate credentials along the way”.

A Just Transition Fund, to help regions reliant on polluting industries diversify their economies, was cut from a proposed €37.5 billion to €17.5 billion.

However under the final deal Poland, the only holdout against net zero, is eligible for 50% of its allocated funds without changing its climate stance.

Prime minister Morawiecki claimed it as a win, while promising Poland was “building [its] plan to achieve carbon neutrality”.

Poland will receive a total of €125 billion in grants from EU funds over the next seven years, Morawiecki said – calling the agreement “the best possible deal for the whole of Europe”.

Robert Tomaszewski, a senior energy analyst at Warsaw-based think tank Polityka Insight, agreed it was a Polish victory. But he warned the government was “losing diplomatic capital” by resisting climate commitments.

Far from exiting coal, the Polish ministry of state assets announced plans on Friday to throw the industry a lifeline. It will create a $33 million strategic reserve of hard coal – propping up demand for coal mining, which it said had been plunged into a “very serious crisis”.

For Aleksandra Gawlikowska-Fyk, an analyst at Forum Energii, Warsaw was simply buying time “to find a way to sell the target domestically” to a polarised government and powerful mining unions.

The country faces an even bigger challenge if the EU approves to a proposal to increase its 2030 emissions reduction target from 40% to 50-55%. “That would mean huge changes in just 10 years and no place for coal. Poland has no idea of how to get there,” she said.

The agreement among EU leaders will now be debated and voted by the European Parliament – with climate observers hoping European lawmakers will strengthen the agreement’s climate provisions.

Rebekka Popp, a researcher for the environmental think tank E3G, told CHN lawmakers will have to address the risk of Poland “still being able to access a share of the Just Transition Fund to prop up a coal industry that is fast losing competitiveness”.

With unwanted Polish hard coal piling up in large reserves, the government said it had brokered a deal with utility companies to purchase coal from state-run Polska Grupa Górnicza (PGG), Poland’s largest coal company. It also promised to present a restructuring plan to the mining unions on Thursday which will give “guarantees on the functioning of profitable units in the longer term”.

Tomaszewski said the government was “avoiding making tough decisions” on winding down domestic coal mining at a time of increased tensions with the unions. The announcement hinted that it could be readying to “tell part of the hard truth” that some mines will need to close, he added.

Warsaw is also working on a plan to transform the country’s energy sector which it said would protect jobs “while guaranteeing the stable functioning of the energy and mining industries for the next decades”.

According to leaked documents obtained by Polityka Insight, the plan would see Poland’s largest state-owned power companies – PGE, Tauron and Enea – merge into a single group. A new National Energy Security Agency (Nabe) would take over their coal-fired power plants, allowing the government to manage their gradual closure.

Tomaszewski said the move would send “a positive signal” to markets and companies to invest in clean power sources and “increase the pace of the energy transition” in Poland. But such a plan would need have to go back to Brussels for approval by the European Commission under state aid rules.