Comment: In technical assistance to governments like Mozambique’s, the World Bank favours the interests of the fossil fuel industry over those of ordinary citizens 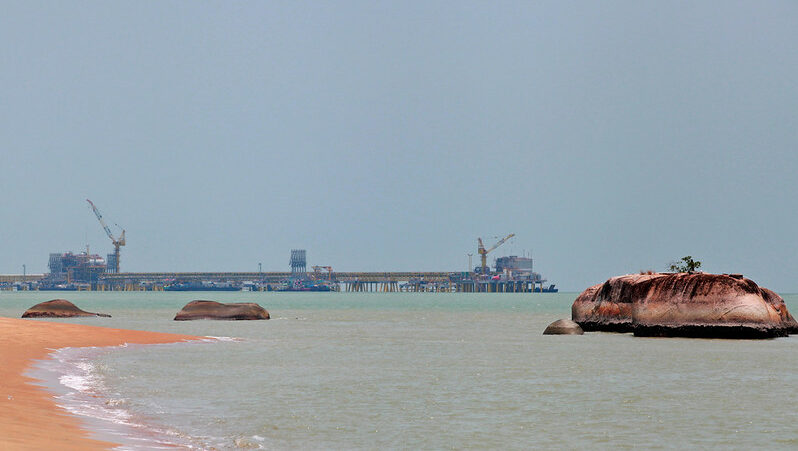 On July 16, it was widely reported that French oil major Total and partners signed financing agreements worth US$14.9 billion for the massive Area 1 Liquified Natural Gas (LNG) project in Mozambique.

The deal is being hailed as the largest project financing ever in Africa. It involves 19 commercial banks and public finance from 8 export credit agencies (ECA) and the African Development Bank.

What has not been widely reported is the important role of World Bank public assistance that enabled such a large, unprecedented gas investment to go forward.

In Mozambique, the World Bank has provided  $87 million in Technical Assistance with the stated aim of improving governance in order to increase gas and mining investments to bring about broad-based growth.

Much of the Bank’s assistance has focused on supporting Areas 1 and 4, which turn Mozambique into one of the world’s largest LNG exporters. The giant LNG development is at the center of growing concerns over displacements, loss of fishing livelihoods, Islamist insurgencies, and the climate crisis. For many reasons, it is important to understand the role of the World Bank

In practice, the World Bank’s technical assistance funds consultants to advise the government on such things as tax and regulatory policies and the facilitation of large complex financial agreements. Bank-funded consultants have been supporting the government for years to lay the legal groundwork and negotiate the agreements to secure the $14.9 billion finance package.

During the World Bank-sponsored advisory, a new law covering LNG Areas 1 and 4 activities was published in December 2014. According to the law firm Shearman and Sterling, among many concessions, this law includes that no preference needs to be given to Mozambican suppliers for procurement of goods and services required due to financing from ECAs.

This concession greatly increased opportunities for companies from the countries with participating ECAs at the expense of Mozambican firms.  The Export Import Bank of the United States (US Exim) announced its $5 billion loan to Area 1 LNG involves 68 American suppliers and will support an estimated 16,400 American jobs. It is hard to believe this financing agreement structured with the help of World Bank-paid consultants is the optimal outcome for job creation in Mozambique.

ECA concessions are not the only concern. Since 2012, the World Bank has funded over $14 million in contracts to at least 12 consulting firms to assist the government on the financial package negotiations involved in LNG Areas 1 and 4. Many of these firms have ties to oil companies and at least two of these firms raise substantial conflict of interests. In addition to advising the government of Mozambique, the law firm SNR Denton also advised multiple oil companies involved in Mozambique’s LNG Area 1, including Total, ONGC Videsh Limited (OVL), and Bharat PetroResources.

Furthermore, in 2016 ExxonMobil acquired a 25% interest in Mozambique’s LNG Area 4. In 2018, the World Bank funded a $2.4 million contract for LNG transaction assistance involving a group of consultants, including ExxonMobil’s favored law firm Hunton Andrews Kurth. During this same period, ExxonMobil paid the law firm $500,000 in lobbying fees in the US. It seems instead of promoting governance that would shield the government from the oil industry’s influence, the World Bank’s assistance is facilitating it.

In addition to advancing governance that appears to favor oil companies and financiers over the interests of Mozambique, the World Bank’s public assistance may be undermining its commitment to the goals of the Paris Climate Agreement, which include limiting global warming to 1.5C.

In November 2019, researchers from several expert organizations, including the UN Environment Program, determined the world was on track to produce 120% more fossil fuels in 2030 than would be compatible with a 1.5C pathway. Simply put, there is already far too much investment going into fossil fuel production.

Seeming to recognize this fact, in 2017, the World Bank announced it would end direct finance of upstream oil and gas (exploration and production) by the end of 2019.  However, this pledge excludes the Bank’s technical assistance and development policy loans.

One particularly important area the Bank’s assistance continues to support is tax incentives for fossil fuel investments.  In Mozambique, to attract new investments beyond Areas 1 and 4, the World Bank’s $110 million development policy loan in 2014 required the government to approve a new petroleum tax law. The new tax law includes several investment incentives, such as accelerated rates of depreciation for oil and gas exploration.

Accelerated depreciation of new capital investments allows oil companies to quickly write down capital investments that would otherwise depreciate more gradually. In other words, larger tax reductions are taken at the start of the operation, thus making new projects more economic and increasing cash flows that can be put towards more drilling.

The World Bank states that in order to advance the energy transition from fossil fuels to renewable energy, we need to get economic incentives right.

In the case of technical assistance and development policy loans, it appears the World Bank continues to get the incentives wrong.

Heike Mainhardt is a senior advisor at Urgewald.