As rich countries spend billions bailing out industries hit by the Covid-19 slump, the German chancellor urged them not to forget their climate commitments 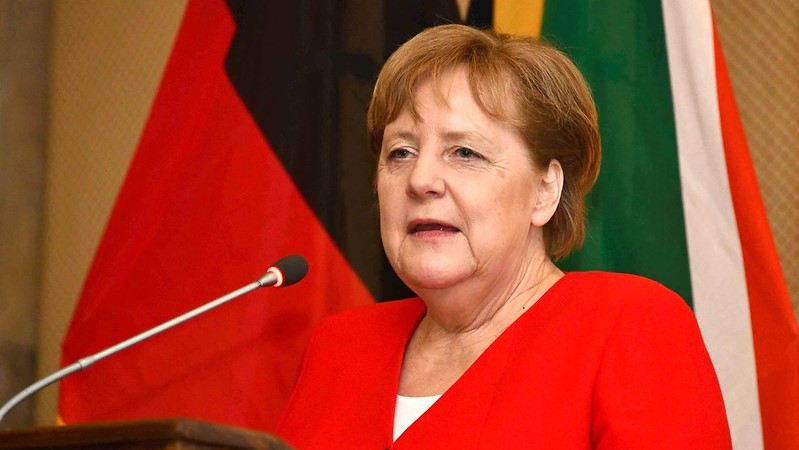 Addressing ministers from 30 countries by video link during the second day of the Petersberg Climate Dialogue, which took place online, Merkel urged governments not to neglect international climate finance. They should not “try to reduce it in order to save money, but on the contrary to enhance it,” she said.

The Petersberg Climate Dialogue – a mainstay of the climate diplomacy calendar – was focused on the design of ‘green recovery packages’ following the coronavirus-induced economic slowdown.

As governments in the world’s richest countries mull over multi-billion dollar stimulus plans and bailouts to hard-hit industries, developing countries are facing the twin crises with fewer resources.

In a statement to Climate Home News, a spokeswoman for the African Group expressed concerns the Covid-19 pandemic might divert rich countries’ attention away from climate finance as they will “inevitably have other national priorities related to economic recovery”.

In 2009, developed countries promised to mobilise $100 billion per year by 2020 to help vulnerable countries cope with climate impacts and reduce emissions – a goal that rich countries have not yet met.

The African Group said it would be calling on developed countries “to agree on a way forward to close the climate finance gap by the end of this year”.

Discussions on establishing a new collective climate finance goal is also due to start at the next round of UN climate talks, known as Cop26, initially scheduled for November and now postponed to an unspecified date in 2021.

Merkel admitted the dual needs for Covid-19 recovery funds and climate finance would lead to “a very difficult debate” over how governments distribute their money. She urged ministers not to focus solely on their national situation, “but to fulfill our international commitments so that we have a global success in climate protection”.

International cooperation, she said, is “crucial” in responding to global challenges as she called on every country to ensure “we can turn our backs on fossil fuels”.

Merkel said Germany had earmarked €4 billion for “international climate financing” this year – double the amount from 2014.

“And even after 2020, Germany will continue to contribute to international climate finance in accordance with the Paris Agreement,” she added, without providing further details.

In a pre-recorded video address, Rwanda’s environment minister Jeanne d’Arc Mujawamariya said the Covid-19 crisis had “further exposed the unacceptable levels of inequality in our societies and we must work even harder to level the playing field”.

The recovery, she said, “must start by investing in people, especially the most vulnerable”.

International cooperation to tackle both the global public health crisis and the climate crisis was a recurring theme throughout the two-day dialogue.

“The only answer is brave, visionary and collaborative leadership,” said UN secretary general António Guterres, adding that many parts of the world “lacked the necessary political will”.

He singled out the world’s largest emitters, including the US and China, saying they too had to commit to carbon neutrality by 2050.

“Without the contribution of the big emitters, all our efforts will be doomed,” he warned.

Among some of the concrete propositions to enhance cooperation between countries, Japan’s environment minister Shinjiro Koizumi offered to establish an online platform for willing countries to share experiences on the Covid-19 recovery and climate action.

“This would take place ahead of Cop26, maybe later this summer,” Koizumi said, adding Japan could provide technical support and would work closely with UN Climate Change and the UK, which is hosting Cop26. Guterres said he was “fully supportive” of the idea.

In a separate message to the Petersberg Climate Dialogue, Koizumi said Japan would raise its 2030 ambition despite sticking to its existing carbon-cutting target in a submission to the UN last month.

“Let me make it clear. It is not our intention to leave the national target as it is,” he said, adding Japan’s climate plan will reflect tougher emission reduction effort following a national review. Additional information to the 2030 climate plan would be submitted to the UN before Cop26 in Glasgow next year.