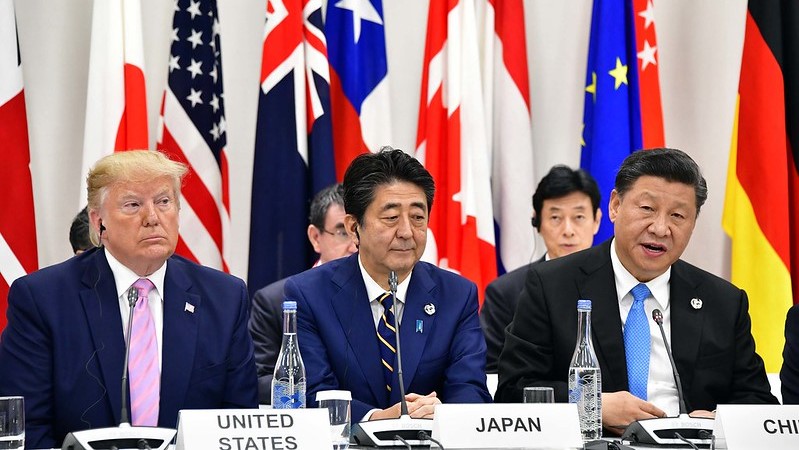 China may wait for the results of the US election planned for November before submitting new climate plans to the UN. (Photo: GovernmentZA/Flickr)

China could delay submitting it climate plans at least until after the US presidential election in November as officials focus on reviving the economy from an unprecedented slowdown, experts have warned.

The impact of the coronavirus pandemic on the climate diplomacy timetable has thrown uncertainty over when China, the world’s largest emitter, will issue updated climate policies to the UN. Such plans are due to be submitted this year.

Critical UN climate talks, known as Cop26, intended to spur more ambitious emissions cuts at the first five-year milestone of the 2015 Paris climate agreement, have been postponed to 2021 from the original date of November 2020 in Glasgow.

Governments had been under pressure to submit plans well before November, so the delay gives a little more time.

Under the Paris Agreement decision texts, countries are still expected “by 2020” both to update their climate policies lasting until 2030, known as nationally determined contributions (NDCs), and to publish a longer-term decarbonisation strategy. The deadline is widely interpreted as 31 December this year.

China has repeatedly said it would fulfil its commitments under the Paris accord and planning for its long-term strategy is under way.

On the fringe of the G20 summit last July, China vowed to publish its long-term decarbonisation strategy before the end of this year. It also committed to ramp up its NDC  climate plan “in a manner representing a progression beyond the current one” but without providing a timeline.

Now reeling from an interruption of its productive capacity and a slashed growth forecast – the timetable for climate diplomacy has dropped down the list of Beijing’s priorities. More than 114,000 people have died worldwide from Covid-19.

China’s environment ministry did not respond to an email request for comment on exactly when it would publish its plans.

Chile to peak emissions by 2025, under strengthened climate pledge

“It’s more unlikely now that China will come out with something before the US election,” said Dong Yue, research fellow at the Beijing-based think-tank Energy Foundation China, during a briefing of the Institute for Sustainable Development and International Relations (Iddri).

The US election – due on 3 November – could be a gamechanger for climate diplomacy.

The US will formally leave the Paris Agreement on 4 November following a decision by President Donald Trump. If elected, Democrat Joe Biden would immediately rejoin the agreement and could make the US a key player for climate action at the postponed Cop26.

“I would certainly expect China’s NDC submission after the US election,” said Kelly Sims Gallagher, a former senior advisor on China and climate change under the Obama administration and a professor of energy and environmental policy at the Fletcher School of Law and Diplomacy in Massachusetts, US.

While progress on China’s critical five-year-plan – Beijing’s top-level policy blueprint for 2021-2025 – is expected to go ahead this year, Beijing could wait for the election results to make international commitments, she told Climate Home News.

“If Biden beats Trump then there would also be time for the US to get its act together and reach out to China” to raise ambition, she added, citing the way the world’s two largest economies underpinned the Paris climate accord by agreeing emissions cuts in a 2014 deal.

Sims Gallagher suggested China and India could send nominal NDC updates to the UN before the end of the year and decide to enhance their targets at a later date.

In 2015, China formally submitted its first NDC in June, well before the Paris summit in December that year, helping spur action by other nations. Beijing’s core pledge was “to achieve the peaking of carbon dioxide emissions around 2030 and making best efforts to peak early”.

Alarming scientific findings about global warming, ranging from deaths of coral reefs to a thaw of Antarctica, have since raised urgency for tougher action by all nations, especially the big emitters.

The United Nations has urged cuts in global emissions of 45% by 2030. China’s per capita emissions were 7.72 tonnes of carbon dioxide in 2017, well above the world average of 4.91.

Interministerial consultations on China’s NDC are expected to continue over the next few months and a ministerial line will eventually need to be adopted but those discussions have taken a back seat.

“In the short to medium term, the attention of Chinese leaders will be very much on… trying to revive the economy and this will leave less political and diplomatic space for the environmental agenda.”

This year’s GDP target – a key political metric in China –  is now the subject of a “heated debate” with “huge implications” for China’s stimulus package, Li said. This “illustrates the level of uncertainty ahead of us… so we may probably allow some more time for issues such as NDC and the long-term strategy”.

Although “China is in technical capacity to enhance its NDC and achieve it,” said Dong, an improved headline target is not the only way Beijing can shift the direction of climate action to 2030.

As the global economy braces for a recession, the spotlight for climate action is shifting to governments’ plans to reboot their economies – without locking-in carbon-intensive infrastructure but accelerating the green transition.

The cash injection into the Chinese economy in the wake of the pandemic comes after Beijing had been facing slower economic growth and employment rates in recent years.

“Before Covid-19 hit out, dark clouds were already hovering above China’s climate politics,” Li said, citing a bounce back of coal consumption and a lack of trust in international diplomacy.

Before the outbreak, China had more than 200GW of new coal-fired power plants at various status of construction and planning.

Now, the recovery efforts and investments decisions will have a long lasting impact on China’s economic structure.

“As the first country to come back from the crisis, China might set the tone on the consistency of the economic stimuli and the climate agenda,” Dong said.

So far, Beijing has been keen to promote “new infrastructures” such as 5G networks, big data centres and artificial intelligence which could boost the efficiency of the economy.

This also includes “shovel-ready” projects that could stimulate green sectors, such as the deployment of charging points for electric vehicles and the expansion of high-speed railway, and create jobs.

In the long-run, Dong said environmental safety, climate, health and social resilience “ should become core metrics of China’s success in recovery – not just its GDP”.