Governments are expected to submit long-term climate plans as well as shorter-term 2030 goals. A guide to the ambiguous legal documents seeking more action in 2020 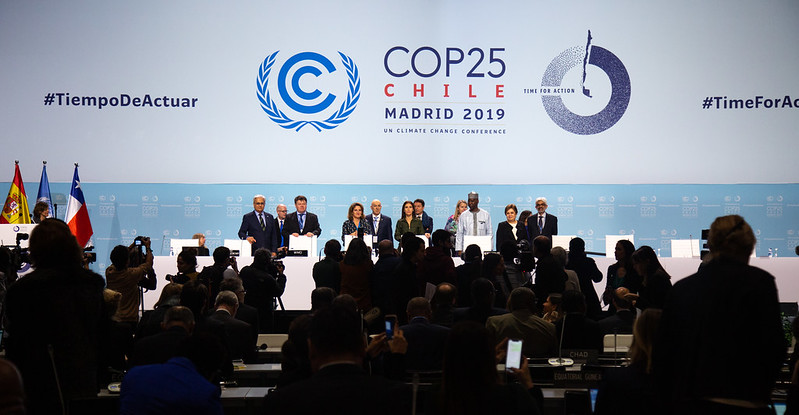 The opening of the high-level talks at Cop25 in Madrid (Photo: UN Climate Change/Flickr)

This year will test governments’ willingness to step up action to cut greenhouse emissions at the first five-year milestone of the 2015 Paris climate agreement.

The UK is hosting UN climate talks in November in Glasgow, known as Cop26, hoping to galvanise more ambition despite disruptions to the world economy from the coronavirus outbreak and an oil price war.

The following is a look at the sometimes obscure UN documents whose interpretation will bolster or undermine hopes – of everyone from UN Secretary-General António Guterres to Swedish teenage activist Greta Thunberg – that 2020 will be a turning point for tougher action:

What are governments expected to do in 2020 under the Paris Agreement?

They’re meant both to set long-term 2050 goals to decarbonise their economies, and to set shorter term targets lasting until 2030. Some of the key texts include words such as “requests” or “invites” or “urges” – stopping short of legal obligations.

How are governments doing to set long-term goals?

Many developed nations are setting targets for “net zero” emissions by 2050. The decision implementing the Paris Agreement “invites” countries to submit such long-term strategies this year:

The Paris Agreement itself includes a more strongly worded instruction to “strive” to work out long-term strategies:

Among submissions so far, the European Union issued its strategy for a net-zero economy in March to UN Climate Change, and other developed nations including Japan, Canada and Mexico have previously done so.

The EU’s biggest economies – Germany and France – have also separately sent in plans, as has Britain. Among developing nations, Costa Rica, Benin, Fiji and the Marshall Islands have submitted plans.

The UK-based Energy and Climate Intelligence Unit estimates that 49% of world gross domestic product is generated in places where the authorities have set, or are proposing to set, a target of bringing carbon emissions to net zero in or before 2050.

Such net zero plans can be powerful roadmaps for action but are often less compelling than shorter-term plans that require governments to take hard choices now.

The risk is that future governments will fail to stick to bold 2050 visions. The US under former President Obama, for instance, submitted a long-term 2050 plan in November 2016 – it has been ignored by President Donald Trump.

How about setting shorter-term targets?

Climate plans, known as Nationally Determined Contributions (NDCs), which define policies lasting until 2030 or 2025, are the core building blocks of the Paris Agreement. So far, 184 nations have submitted a first NDC. Four – the Marshall Islands, Suriname, Norway and Moldova – have issued a second.

The text of the Paris accord instructs countries “to undertake and communicate ambitious efforts” on NDCs and lays down a requirement – using the word “shall” – that every country has to issue a new NDC every five years once the agreement is up and running.

The text also says that every NDC will be tougher than the last, to ratchet up global action to limit rising temperatures. This requirement was one reason Trump decided to withdraw the US from the Paris Agreement.

The Paris Agreement was adopted in 2015, so 2020 is the first test of this five-year ratchet mechanism?

Maybe. A complication is that the process that led to the 2015 Paris Agreement was launched at a UN climate conference in Durban, South Africa, in 2011. And those documents say a deal will be ‘implemented from 2020’:

In 2011, it seemed to make sense for a new accord to start in 2020 since most developed nations already had targets to cut emissions lasting until 2020 under the 1997 Kyoto Protocol, the predecessor of the Paris Agreement.

So if the Durban timetable applies, governments don’t have to do anything until 2025 – a whole decade after the Paris summit?

In Paris, negotiators realised that 2025 was a long way off, and so they built in 2020 checkpoints into a formal decision implementing the agreement.

Alarming scientific evidence about global warming – from dying coral reefs to melting Antarctic ice – is raising expectations for more ambition around the world. Also, the Paris Agreement won enough ratifications to enter into force far quicker than expected, in November 2016.

That is heaping pressure on governments to do more in 2020 to limit average temperatures to the Paris goal of “well below” 2C above pre-industrial times while pursuing efforts for a tougher ceiling of 1.5C. Current plans put the world on track for warming of more than 3C.

The Cop25 meeting in Madrid in December 2019 toughened calls for action in 2020 by talking about a “serious concern” and “urgent need” to plug gaps between governments’ existing plans and the temperature goals of the Paris Agreement:

Under the 2015 Paris decision, countries with NDCs stretching only to 2025 are asked to send in a new NDC this year stretching to 2030.

That applies to 13 countries – Ecuador, Congo, Gabon, El Salvador, Suriname, Guyana, Belize, Micronesia, Saint Vincent and the Grenadines, Samoa, Niue, Palau and Tuvalu. Separately, the US also has a goal lasting until 2025, but will formally quit the deal on 4 November.

But most countries, with NDCs stretching to 2030, are merely asked to “communicate or update” their plans by 2020. In practice, almost all nations submitted NDCs in 2015, so it may be enough for them simply to reaffirm these plans in 2020. Merely restating 2015 goals would sap the Glasgow summit.

The next paragraph of the decision, however, says that countries have to submit new plans at least nine months before the relevant Cop. If countries believed the first test was in 2020 rather than 2025, that would mean 9 February, nine months ahead of Cop26 that runs from 9-19 November in Glasgow.

Only three countries – the Marshall Islands, Norway and Suriname – met that February deadline. Together they account for about 0.1% of world emissions.

Paragraphs 23 and 24 of the Paris decision text also say that plans have to be submitted “by 2020” rather than “by the Cop”. In the worst case, that could allow countries to submit plans in December – after Cop26 and the US presidential election on 3 November.

The Madrid decision tries to discourage laggards by asking UN Climate Change to compile a “synthesis report” of NDC submissions in time for Cop26 – clearly implying they have to be submitted in advance.

Isabel Cavelier, a legal expert with the International Climate Politics Hub, told Climate Home News paragraphs 23 and 24 frefer directly to 2020 and so the deadline mentioned of “by 2020” is more important than the nine months mentioned in the generic paragraph 25.

“Law that is specific to a particular context overrules law that is generic (this is the ‘lex specialis’ principle),” she wrote in an email.

“I think the better reading of paragraph 25 is that it does not apply to 2020 updates/recommunications,” echoed Sue Biniaz, who was the US State Department’s lead climate lawyer for almost three decades until 2017.

This article was updated on 13/03/2020 to include the implications of the Cop25 decisions.