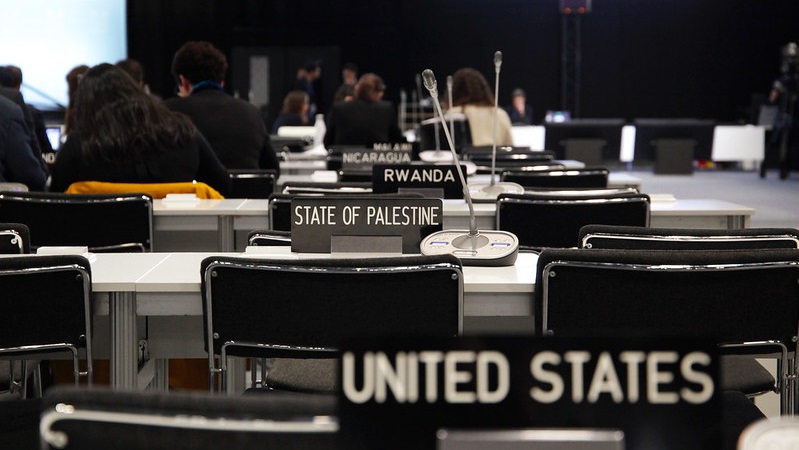 The UK faces a tough diplomatic double act to propel ambitious climate action into the next decade at the UN climate talks in November while negotiating its new trading relationship with the world after Brexit.

The tension between the UK government’s priorities was on display this week as Prime Minister Boris Johnson both set out his vision for a global Britain and formally launched Cop26.

Outlining his “global Britain” campaign, Johnson declared his government was “ready for the great multi-dimensional game of chess in which we engage in more than one negotiation at once”.

Much hope rides on the expectations that the game will include climate diplomacy.

Christiana Figueres, former executive secretary of UN Climate Change, told Climate Home News that Cop26 in Glasgow “was a post-Brexit opportunity to show that despite Brexit, Britain continues to have important leadership on global issues”.

But nine months before the UK is due to preside over the biggest diplomatic event it has ever hosted, there are no clear indications of how the government will deliver the confidence lift the world needs to deliver tougher climate targets.

At the Cop26 launch on Tuesday, Johnson, who had just sacked Claire O’Neill, the UK’s former clean growth minister, as Cop president, had little to say about the government’s diplomatic strategy for the summit.

He called on every country to follow the UK’s lead by setting net zero emissions goal this year and announced plans to bring forward a UK ban on sales of new diesel and petrol cars by five years, to 2035.

The climate talks in Glasgow have been billed as a critical moment for countries to revive the multilateralism that underpinned the Paris Agreement and leverage the world’s largest emitters into taking bolder climate action.

O’Neill, who was appointed Cop26 president in July, would have been the first Cop president not to hold any ministerial role.  The government said a minister would be replacing her.

Some observers interpreted the move as a positive signal that Johnson’s team understands the need for a political heavyweight to take the lead.

But the fallout between Johnson and O’Neill has also raised questions about the Prime Minister’s grasp of the diplomatic gravitas of hosting such an important climate meeting.

In a strongly worded rebuke letter, O’Neill accused Johnson of not giving the summit the attention and resources it needed, with preparations “miles off track”.

“In my judgement this isn’t a pretty place to be and we owe the world a lot better,” she wrote, calling on the government to make the climate talks the top of its priorities.

“You had a vision for Brexit and you got Brexit done….Please get this done too,” she urged. Johnson has called on the EU to agree a Canada-style free trade deal with the UK before the end of the year.

Diplomats have told CHN the UK’s work on Cop26 had only just started when O’Neill was dropped from the role. They expressed eagerness for the UK to start its diplomatic work as soon as possible.

Speaking to CHN before O’Neill was removed, Rachel Kyte, dean of the Fletcher School of Law and Diplomacy at Tufts University in Massachusetts, said the UK was “expected to be able to do joined-up governance” without having to start again from scratch.

Johnson is anticipated to announce a new Cop26 president as part of a cabinet reshuffle, reported to take place next week.

The late timing of the announcement is putting more pressure on the UK to deliver greater ambition while finalising a number of negotiation issues left unresolved at the last UN talks in Madrid.

“Time is tight, but there is still enough time and enough leverage in the mix for the UK presidency to make some headway,” David Waskow, director of the World Resources Institute’s international climate initiative, told CHN.

Once a new Cop26 president is appointed, it will be “a matter of rolling out that diplomatic effort as quickly and assertively as possible,” he added.

Possible candidates to replace O’Neill are already under intense scrutiny. For Jennifer Tollmann, an expert in climate diplomacy at think tank E3G, the new appointment will be “key to signalling to the rest of the world how serious [the UK government] is about the Cop”.

The new president will need to have good background understanding of the climate process, diplomatic experience and the commitment and determination to make the summit a success, Waskow and Tollmann agreed.

“It’s really important that the Prime Minister is fully attached to the outcome of the Cop because otherwise we will not get the top political attention that the Cop needs,” Nick Mabey, chief executive of E3G, said in an event at the International Institute for Environment and Development (IIED) in London last month.

Inside the Cop26 presidency team, about 150 civil servants have been brought in to push ambition to the rest of the world. “Diplomats are ready to go, they are waiting for marching orders,” a UK official told CHN.

Even with the best geopolitical outlook, the scale of the Cop26 challenge is enormous.

Countries are under pressure to enhance their climate plans to bridge the gap between current emissions reduction pledges and what is necessary to limit global warming “well below 2C” above pre-industrial times.

Global emissions need to fall by 7.6% every year until 2030 for the world to be on track to limit warming to the toughest goal in the Paris Agreement of 1.5C, according to UN Environment. And global carbon emissions rose 0.6% in 2019 to a new record high.

Under the Paris deal, countries are due to “communicate or update” their 2030 climate plans by the end of the year. Countries have also agreed that successive climate plans “will represent a progression” and reflect their “highest possible ambition”.

This rachet-up mechanism, which underpins the Paris accord, is being tested for the first time.

But the geopolitical momentum for climate action is stalled, making the task ahead even greater.

The US will officially leave the Paris Agreement on 4 November, a day after the US presidential election, under a withdrawal by President Donald Trump. Leading Democratic candidates say they will immediately apply to rejoin if they beat him.

Efforts to bolster momentum last year have failed. At Cop25, countries failed to agree on the rules to set up a global carbon market – an issue that needs to be resolved this year – and failed to make a clear call for more ambition.

The UK presidency is now largely dependent on the outcome of an EU-China summit in October, when the EU is hoping to broker a climate deal with Beijing to inject momentum into the process.

At home, the UK’s credibility lies on its own ability to develop a concrete plan to achieve its 2050 net zero emissions goal.

Last year, the UK was the first major developed economy to set a net zero goal into law. Under the Paris Agreement, all countries are expected to work out “mid-century, long-term low greenhouse gas emission development strategies” by the end of 2020.

“The year ahead is an acid test of the new [UK] government’s climate credibility,” Chris Stark, chief executive of the UK’s Committee on Climate Change, wrote last week.

But analysis by the environmental think tank Green Alliance published on Monday found the UK to be off track to meet its 2050 target.

For Mabey, the Paris Agreement hangs in the balance of the Cop26 outcome. “Failure is really on the agenda for Glasgow. If Glasgow fails then the Paris regime fails, and we lose another five to ten years building another regime,” he said.

In her letter to Johnson, O’Neill outlined a seven-point action plan to ramp up climate action. Strengthening countries’ climate plans and establishing carbon neutrality as the climate ambition goal topped the list.

Introducing a “properly-funded global package for adaptation and resilience building”, a focus on nature-based solutions and decarbonising finance flows also made the list.

The appointment of former governor of the Bank of England Mark Carney and incoming UN special envoy for climate action and finance and former We Mean Business CEO Nigel Topping as the UK’s climate action champion has further boosted the UK’s finance agenda.

Kyte told CHN it was “absolutely appropriate to put finance right at the top of [Cop26’s] agenda” both in a real economy sense but also as part of the negotiations.