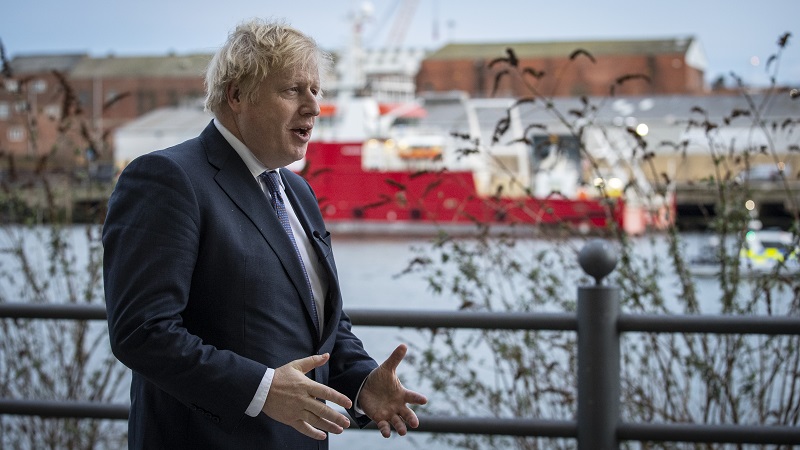 UK Prime Minister Boris Johnson has called on every country to set long-term goals in 2020 to reach net zero emissions at the formal launch of UK plans to host UN climate talks in November.

“We were the first to industrialise, so we have a responsibility to lead the way,” he told the audience of selected reporters at the Science Museum in London on Tuesday to outline plans for Cop26 in Glasgow.

“We have to deal with out CO2 emissions and that is why the UK is calling for us to get to net zero as soon as possible – for every country to announce credible targets to get there [sic]. That is what we want in Glasgow,” he said during the event attended by Italian Prime Minister Giuseppe Conte and British naturalist broadcaster David Attenborough.

The UK and Italy won a joint a bid to host this year’s critical climate summit, with Milan hosting a preparatory meeting and a youth event and Glasgow hosting the summit.

The UK was the first major economy to set a net zero emissions target by 2050 in law last summer and Johnson said he would “lead a global call to reach net zero”.

Johnson launched Cop26 despite the fact the summit is lacking a president to facilitate it.

His speech was overshadowed by an intensifying fallout with Claire O’Neill, the UK’s former clean growth minister, who was sacked as Cop26 president on Friday evening.

Hours before Johnson’s speech, O’Neill made a blistering personal attack on Johnson accusing him of failing to understand the diplomatic gravitas of the summit.

“We have seen a huge lack of engagement and leadership,” she told the BBC of Johnson’s attitude towards Cop26. “He also admitted to me that he doesn’t really understand it,” she said, adding that “others around him do”.

In an explosive letter addressed to Prime Minister Johnson, O’Neill said preparations for the summit she was in charge of were “miles off track” and accused Johnson of not giving the summit the attention and resources it needed.

In her letter, O’Neill described government in-fighting over who should be accountable for the talks preparations, ballooning budgets and the lack of planning for international engagements to the summit.

“In my judgement this isn’t a pretty place to be and we owe the world a lot better,” she wrote, calling for “a whole government reset” which would move the summit to the “Premier League” of the government’s priorities.

“You had a vision for Brexit and you got Brexit done. Please get this done too,” she added.

Johnson did not respond to questions over his motives for sacking O’Neill.

Rebecca Newsom, head of politics for Greenpeace UK, said the UK government needed “to rise above petty politics” and “lead by example” by “get[ting] its own house in order”.

Some observers had hoped O’Neill’s replacement would be announced during the summit’s launch given the short timescale to the November summit. The next Cop26 president is now expected to be announced during a UK cabinet reshuffle tipped to take place next week.

Alex Scott, senior policy advisor on Cop26 for the environmental think tank E3G, told Climate Home News a new appointment needed to be made as soon as possible.

“We are really hoping that there is some clarity on this as soon as possible because of how late in the day it is now and the gravity of the diplomatic task ahead,” she said.

“What this process is going to need is a little more Boris Johnson level engagement. We need to see a lot more commitment from the prime minister on the Cop strategy,” she added.

Cop26 is widely considered the most important climate summit since the Paris summit in 2015.

Countries are under pressure to increase their climate plans to bridge the gap between current emissions reduction pledges and what is necessary to limit global warming “well below 2C” above pre-industrial times.

Current temperature projections set warming to be on track for more than 3C by the end of the century.

Under the Paris Agreement, countries are also due to publish their long-term decarbonisation strategies before the end of the year.

Last year, the UK won praise for setting a national carbon neutrality goal for 2050 but has taken few steps to develop a comprehensive plan to meet it.

Analysis by the environmental think tank Green Alliance published on Monday found the UK was off track to meet its 2050 target.

Much of the UK’s credibility for demanding the world to achieve carbon neutrality by the middle of the century relies on its own ability to come up with a meaningful plan to reach its own 2050 target.

Johnson used his speech to launch a “year of climate action” in the UK. He also announced plans to bring forward a ban on petrol and diesel cars, which includes hybrid cars, to 2035 – five years earlier than initially planned.

Responding to the announcement, the Green Alliance said this was a “move in the right direction” but “isn’t nearly ambitious enough” to meet the UK’s decarbonisation goals. Instead, it called for the ban to come into force in 2030.

Newsom said cars were “an important piece of the puzzle” towards decarbonising the UK economy but could not be seen in isolation.

“Expanding airports, handing out new licenses for oil drilling, and putting billions of taxpayers’ money behind climate-wrecking fossil fuel projects all over the world will not get us to the right destination,” she added.

On Tuesday, the UK’s aviation sector also announced a commitment to become carbon neutral by 2050 mainly by offsetting flights’ emissions – a measure that heavily relies on the use of carbon offsets.