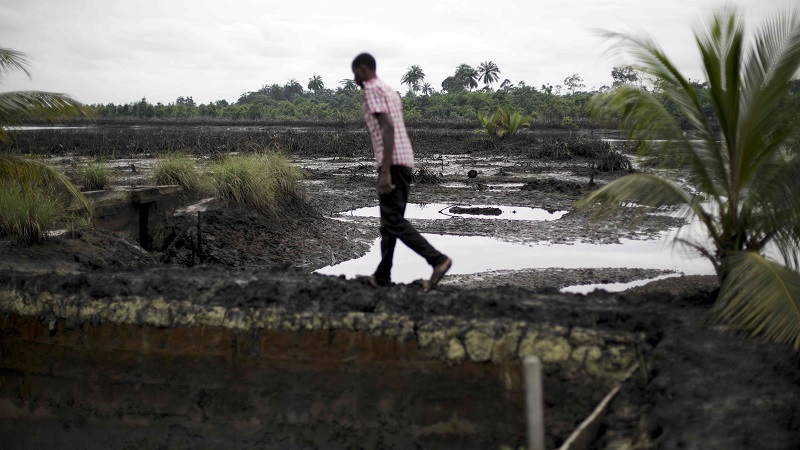 The aftermath of an oil spill in Ogoniland, Nigeria. (Photo: Luka Tomac/Friends of the Earth International/Flickr)

“There is no point in the UK reducing the amount of coal we burn if we then trundle over to Africa and line our pockets by encouraging African states to use more of it.”

That was UK Prime Minister Boris Johnson’s message to African heads of state gathered in London this week to talk investments.

As the UK prepares to pull out of the EU, it has turned some of its attention to the African continent, where it intends to compete for business.

Johnson promised the UK would end all direct support for coal mining and coal-fired power plants overseas. Instead, he pledged to help African countries “extract and use oil and gas in the cleanest, greenest way possible” while “turbocharging our support for solar, wind and hydro”.

In the last few years, the UK had largely stopped financing coal mines and coal-fired power plants abroad but continues to spend billions in supporting oil and gas projects. About £2bn worth of oil and gas deals in Africa were announced shortly after the summit.

Environmentalists blasted hypocrisy, warning the announcement was “a drop in the ocean” compared with ongoing support for foreign oil and gas projects.

In other UK news, a fifth of the country’s agricultural land needs to be released for climate mitigation if it is to achieve carbon neutrality by 2050, government advisers have said.

That means planting trees, restoring peatlands and soils and growing bioenergy crops with carbon capture and storage. Consumption of carbon-intensive food such as beef, lamb and diary also needs to be reduced by a fifth and so does food waste.

The report comes as the UK’s first climate citizen assembly is due to meet this weekend to thrash out solutions to achieve the net zero emissions goal by 2050.

Climate change was the hot topic in Davos. Greta Thunberg reminded the world’s rich and powerful of the science, warning the 1.5C goal risked slipping out of reach as the world rapidly consumes its remaining carbon budget to limit warming below the Paris deal temperature target.

“We don’t need to lower emissions, our emissions have to stop,” she said.

Donald Trump lamented missing Thunberg’s speech. There was no eye roll this time but the US president hit back at climate activists, denouncing them as “prophets of doom” as he boasted about the economy. Expect more of this in the run-up to November’s presidential election.

In Nigeria, where climate change is causing more intense downpours, land is opening up under people’s feet, swallowing homes, farms, businesses and roads.

The erosion crisis is exacerbated by more frequent landslides and has been estimated to cost up to $100 million every year. Up to 90% of agricultural yield have been lost as a result in some areas.

Norwegian plans to drill for more oil and gas in the Arctic do not violate people’s rights for a healthy environment.

The ruling by the Oslo Court of Appeals endorsed a previous court decision vindicating the government’s handing out of oil exploration licences in the Arctic. However, the court acknowledged that emissions from burning Norwegian fossil fuels abroad should be included in assessing environmental damage.

Greenpeace, which brought the lawsuit, said it would take the case to the Supreme Court.