Climate change is aggravating an erosion crisis in Nigeria that is wrecking buildings, roads and farmland. Damage may cost up to $100 million a year 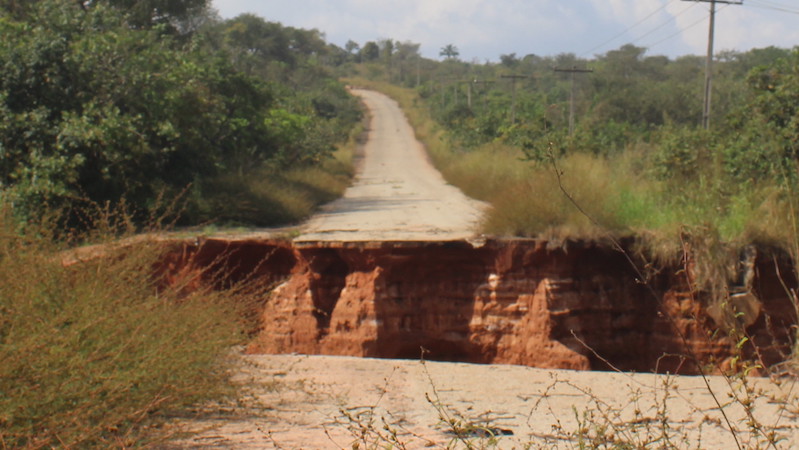 A gully cuts a road near Isuikwuato town (All photos: Linus Unah)

Patience Nwankwo sighs as she stares into the yawning hole in the ground near her home in southeastern Nigeria, the exposed red earth like an open wound slicing across the landscape.

“That big hole has swallowed farms, homes, and roads,” Nwankwo said, her voice quavering as she tells how erosion is creating ravines that are eating away at her hometown, Nanka, and neighbouring Agulu and Oko.

“It might swallow everything here if it is not fixed,” she said. Nwankwo, in her mid-70s, is a smallholder farmer whose home is now only 140 metres from the edge of the growing chasm.

The gully erosion in Nanka – one of the largest in Nigeria at 66 metres deep, 2,900 metres long and 349 metres wide, according to a recent study in the American Journal of Geographic Information System – is guzzling red earth from underneath people’s homes and farms, and making residents fear their property will be next.

The Nanka gully started forming around 1850, researchers say, and the regional soil erosion crisis has accelerated alarmingly in recent decades. It now threatens about 6,000 square kilometres or nearly six percent of Nigeria’s land mass, according to the World Bank.

Just south of Nanka, the bustling, dusty town of Ekwulobia comes into view. Motorbikes and cars stream around the main roundabout, bursting with roadside stores and hawkers. 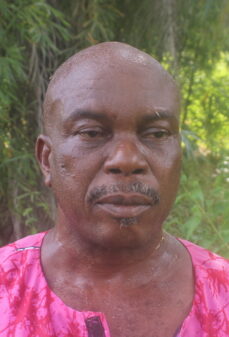 A few kilometres away, another deep gully cuts from the highway and extends into Umuchiana community. More than a dozen homes lie near the edge of the ravine which has destroyed at least 50 homes, said Sunday Ezenwosu, a 55-year-old truck driver and local resident.

The gully is creeping closer to residential apartments and also extending into nearby Oko town. Cassava and yam farms near the gully mouth have been abandoned and overgrown by bushes.

“What that gully spoilt, it was too much,” said Samuel Ezenwama, 73, who was displaced three years ago when erosion engulfed his large family compound which housed four other families with some 19 children. The compound also had more than a dozen plantain, bush pear, African breadfruit, and orange trees.

“It was just last year that we finally got land from a relative to build five rooms for each of the families to manage with their children,” he said. 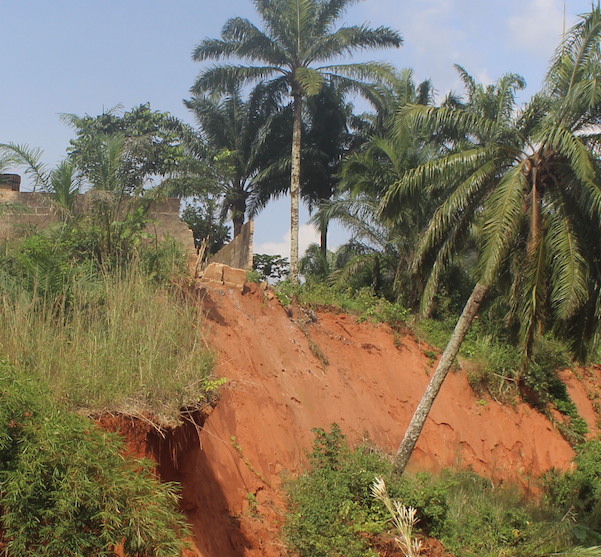 All over the landscape in southeastern Nigeria, gully damage is visible. A deep ravine in Isuikwuato area in Abia state sliced across a highway and another gully near Oraukwu Grammar School in Anambra state submerged the school’s large playground.

As rainfall increases in intensity because of climate change, landslides are becoming more common. In October, a landslide pulled down a home and broke perimeter fence systems in erosion-affected Amuzukwu village near the Abia state capital, Umuahia.

“Most people in this community have abandoned their newly built homes because the big erosion is getting closer and closer to us,” said Ijepka Agwuoge, a father of seven, who lives with his wife near the head of the gully. The walls of Agwuoge’s concrete brick home have cracks already, and his family often flees when there is heavy rainfall.

Benedict Unagwu of the University of Nigeria’s department of social science said soils in the southeastern region, where gullies are most severe, are predominantly sandy and light silt. They have low clay content and organic matter, making the soil fragile and highly vulnerable to corrosive rainfall.

“It is a very serious problem which deserves urgent attention.  Unless soil erosion is given the needed attention, the menace of soil erosion remains inevitable.”

Alexander Opara, former director of the Institute of Erosion Studies at the Federal University of Technology Owerri, said “high intensity of rainfall as a result of climate change” has caused “accelerated erosion”.

He said the effect is multiplied by poor drainage systems while increased pressure on land for agriculture and development have exposed the soil.

The economic damage brought by gullies, mainly in Nigeria’s southeast, could be up to $100 million every year, with an agricultural yield losses of 30 to 90% in some areas.

And Nigeria’s battle with soil erosion is part of a trend playing out in other parts of the world.

In Sub-Saharan Africa, soil erosion accounts for about 77% of land degradation and threatens about 22% of arable land. Soil erosion has also degraded nearly 70% of Uganda’s land, devastated grazing areas in the Maasai landscape in Tanzania and caused average national soil loss rates of 29 tonnes per hectare annually in Malawi.

Soil erosion is also affecting Europe, with 12 million hectares of land – 7.2% of Europe’s total cropland – impacted and resulting in losses of €1.25 billion ($1.4bn) annually in agricultural productivity and €155 million ($172) in gross domestic product, according to the European Commission’s Joint Research Centre (JRC). 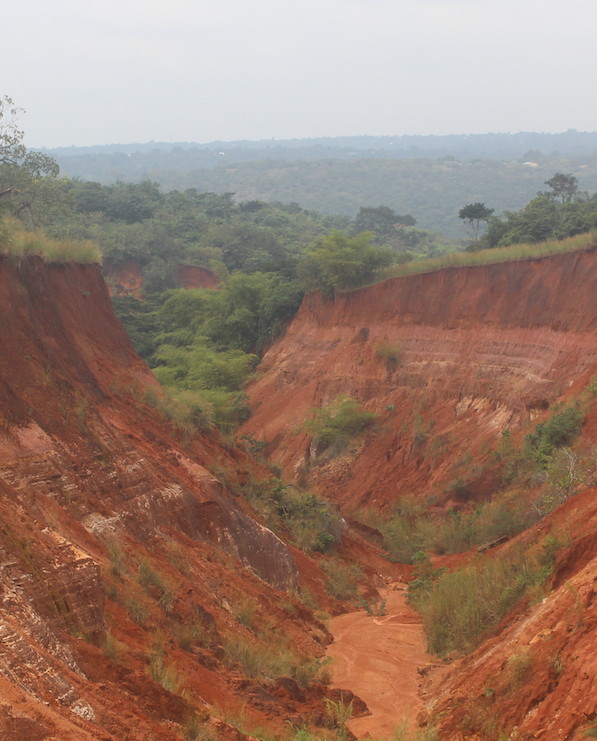 In Nigeria, gullies are now becoming part of political campaigns, with some communities erecting signboards near the highway to draw attention to erosion sites.

“During political campaigns, some politicians pretended to work on the erosion site and made us a lot of promises,” said Sunday Ejike, 37, a resident of Isuikwuato town. But “nothing happened after the general elections” in early 2019.

Since September 2013, Nigeria’s federal government has been receiving support from the World Bank to carry out remedial measures in erosion-affected states under the eight-year, $500-million Nigeria Erosion and Watershed Management Project.

But much more work remains to be done. In October 2019, Nigeria’s minister of state for the environment, Sharon Ikeazor, said federal authorities could declare a state of emergency on erosion.

“The major challenge now is how to stop other areas from being taken away while we fight to recover areas that are severely damaged,” said erosion expert Opara.  The government should hire only “reputable contractors” and ensure reliable environmental impact assessments are done before actual construction work, he argues.

Some communities buffeted by erosion, such as Nanka and Isuikwuato, have been implementing control measures such as planting cashew trees and bamboo and setting up stone barriers to minimize the spread of the gully head.

Soil scientist Unagwu calls for more awareness among communities using adverts, workshops and community gatherings to inform and educate local people about the dangers of erosion and how they can respond, especially by keeping their culverts and canals free of trash.

“Soils around erosion-prone areas should not be disturbed or cultivated,” he advised, adding that there should also be more investment in tree-planting projects.

“The government has to find a way to fix this problem,” she implored.

“All our neighbours living around the gully sites are not here any more, and more people will move as it keeps coming closer to us.”