Trump, Thunberg set out radically different visions for the economy and climate in the 21st century 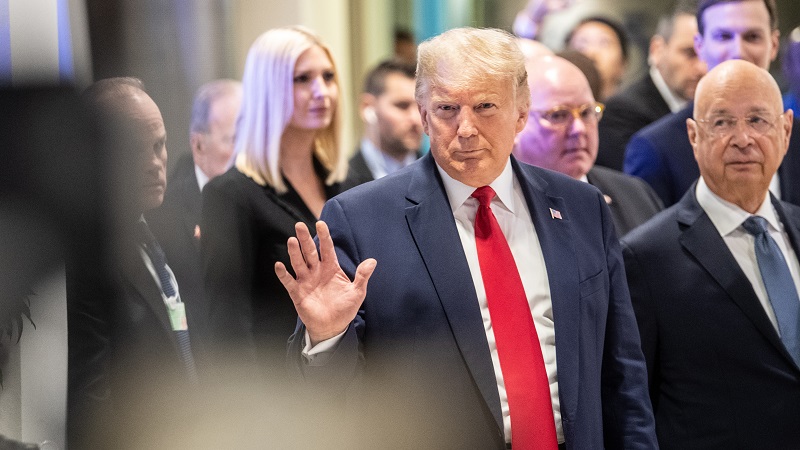 US President Donald Trump denounced “prophets of doom” at the World Economic Forum in Davos focused on climate change and said cheap fossil fuels were helping what he called an unprecedented US economic boom.

His speech was a stark contrast to calls in Davos by Swedish teenage climate activist Greta Thunberg for drastic action by world leaders to shift to cleaner energies to avert a worsening climate crisis of more heatwaves, droughts and floods.

At a session titled “averting a climate apocalypse” by the Davos organisers, Thunberg, 17, said people were rightly outraged at Trump for withdrawing the US from the 2015 Paris climate agreement and faulted other world leaders for failing to cut greenhouse gas emissions.

Meanwhile, Trump told the world´s political and business elite: “This is a time for optimism.”

“The US is in the midst of an economic boom the likes of which the world has never seen before,” he said.

He urged other nations to follow the US lead in promoting deregulation of energy to ensure cheaper gasoline and electricity that he said saved American families on average $2,500 a year. He added that, by contrast, European consumers suffered “crippling” energy costs.

“To embrace the possibilities of tomorrow we must reject the perennial prophets of doom and their predictions of the apocalypse,” Trump said.

Trump said that modern “alarmists” were heirs of those who wrongly predicted an over-population crisis in the 1960s, mass starvation in the 1970s and that oil would run out in the 1990s.

Trump, who did not mention the words “climate change” or “global warming” in his speech, is the only world leader pulling his nation out of the 2015 Paris Agreement, which seeks to limit global warming by cutting greenhouse gas emissions.

Extreme weather, climate action failure, natural disasters, biodiversity loss and human-made environmental disasters top most likely long-terms risks to the global economy in 2020, according to the survey for the World Economic Forum among business leaders, investors and policy-makers.

Last year was the second warmest on record and average global temperatures are about 1.1°C above pre-industrial times, according to the UN.

“The fact that the USA is leaving the Paris accord seems to outrage and worry everyone and it should. But the fact that we are all about to fail the commitments you signed up for in the Paris Agreement doesn’t seem to bother the people in power even the least,” she said.

Thunberg warned business and political leaders the tougher 1.5C goal of the Paris Agreement risked slipping out of reach with the world rapidly consuming the remaining carbon budget identified by the Intergovernmental Panel on Climate Change (IPCC) to remain within the 1.5C temperature goal by the end of the century.

She warned the world had only eight years left to limit warming to 1.5C at the current rate of greenhouse emissions.

“Let’s be clear,” she said, “we don’t need a low-carbon economy, we don’t need to lower emissions, our emissions have to stop if we are to have a chance to stay below the 1.5C target.” “Any plan or policy of yours that doesn’t include radical emissions cuts at the source starting today is completely inefficient” to meet the Paris goals, she added.

Trump said his policies to promote energy – including “clean coal, next generation nuclear power and gas hydrate technologies” – meant the US “no longer needs to import energy from hostile nations” and that US exports could also help its allies ensure energy security.

On the environment, Trump said US air and water were cleaner than at any time on record. He also said that the US would join a one trillion tree planting project being launched at Davos.

Trump, visiting Switzerland on the day his impeachment trial begins in earnest in the US Senate, said that Americans were thriving with low unemployment, high growth and investment.

Before the start of the Davos meeting, Thunberg and a number of young climate activists called on banks, investors, companies, institutions and governments to immediately halt all investments in fossil fuels exploration and extraction, end all fossil fuel subsidies and completely divest from fossil fuels.

“So either you do this or you’re going to have to explain to your children why you are giving up on the 1.5C goal – giving up without even trying,” she said. “People will not give up. You are the ones who are giving up.”