‘We need to re-invent and re-think the management of our landscape,’ say bushfire experts, warning adapting to climate change will require bipartisan political support 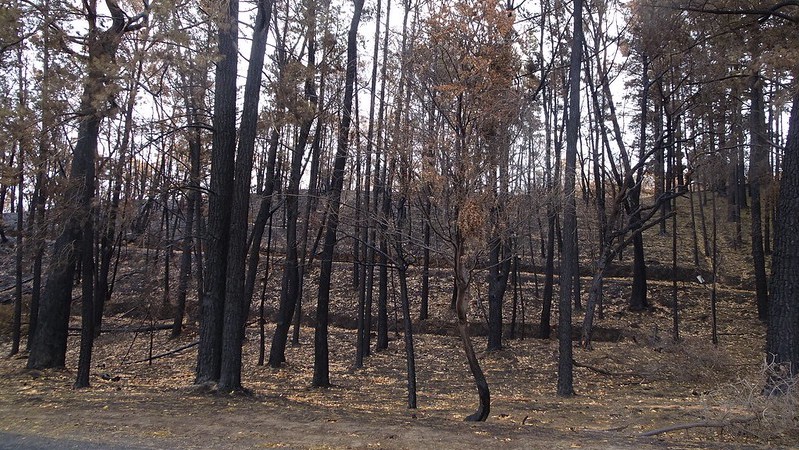 The aftermath of the fires in the Adelaide Hills, southern Australia. (Photo: Denisbin/Flickr)

Like the fires that ravaged California, Australia’s bushfire crisis has exposed the difficulty of battling environmental hazards when politicians are split about how far to blame climate change.

As one of the world’s wealthiest nations struggles to tackle the blazes that have killed at least 28 people, the need to adapt to prolonged and more intense fire seasons has risen to a national priority.

Solutions to mitigate bushfire impacts will require more land management, community engagement and bipartisan political support at a time when climate change continues to be one of the most polarising issues in Australia, bushfire experts have told Climate Home News.

At stake is Australians’ connection with their landscape and ancient fire management practices by Aboriginal people.

“We need to re-invent and re-think the management of our landscape,” Peter Kanowski, professor of forestry at the Australian National University told CHN.

“We need to partner with indigenous communities and respect our landscape and ecological systems. In the face of climate change, land management will require more intervention not less,” he said.

Much hope rides on the expectation the crisis of the last few months will spark a nation-wide conversation about the country’s climate policies, resilience building and land management.

Prime Minister Scott Morrison mooted a proposal for a federal royal commission to look at a “full gambit of issues” including the preparation and response to the fires, and adaptation and resilience measures that need to be taken as a result of the changing climate.

“We are going to be living in a very different climate and we need to improve our resilience in our response to that on the ground,” Morrison told ABC Insiders.

In December, the Australian House of Representatives’ environment committee launched an inquiry into the efficacy of past and current vegetation and land management policy on bushfire intensity and frequencies.

Putting the spotlight on resilience measures to protect Australian communities and the economy could be a quick win for the Morrison government, which has so far refused to take more ambitious carbon-cutting measures or change its pro-coal stance.

Australia has planned to meet its 2030 goal to reduce emissions by 26-28% from 2005 levels using old Kyoto-era carbon credits – a carbon accounting fudge that would cut in half what it needs to do to meet its target.

For Rodney Keenan, head of forest and ecosystem science at the University of Melbourne, any national conversation on Australia’s resilience to bushfires will need to bridge the country’s stark polarisation of climate change.

Disinformation spread on social media and some Murdoch-owned press has continued to expose the lack of consensus for climate action. Such events could “further polarise debate over climate change and land management,” Keenan warned.

But debates about land management practices have already been caught in political cross-fire.

Australia’s former deputy prime minister Barnaby Joyce accused the Green Party of having precipitated the bushfire crisis by blocking fuel hazard reduction – something which they deny and for which there is no evidence.

Last year, wildfires ravaging California exposed deep splits on climate policy between the state and President Donald Trump, who is pulling the US out of the 2015 Paris Agreement.

Such splits distract from working out long-term fixes to the blazes.

In November, Trump blamed Governor Gavin Newsom, a Democrat, for doing a “terrible job of forest management”. Newsom retorted: “You don’t believe in climate change. You are excused from this conversation.”

Land management is crucial to mitigate the intensity of Australia’s bushfires but over recent years, funding has overwhelmingly been allocated to recovery efforts over prevention and land preparation, Kanowski said.

Practices such as hazard reduction enable to reduce the fuel load that a fire could consume to diminish its intensity. This can include prescribed burning, grazing or removing vegetation and trees.

“Don’t forget as settled Australians, we are now living, working and occupying areas that used to freely burn. We can’t lit a burn and let it freely run,” he said.

Burning land to better manage fires has been used by indigenous communities across Australia for thousands of years.

In northern Australia, indigenous fire management practices have been re-introduced by indigenous ranger groups with the support of federal and state authorities.

While the landscape and conditions are different from the south east of the country where the fires have been raging, the scheme has helped shift fire patterns from late to early season and reduced their intensity.

“Aboriginal people in Australia have always maintained a positive relationship with fire,” a spokesperson from the Kimberley Land Council in northern Australia, the body representing aboriginal people in the region, told CHN. “Rather than treating it as something which should be avoided, they understood fire as an essential part of the Australian landscape and used it effectively to maintain balanced and fire resilient ecosystems.”

“This is one example of best practices in fire management,” Kanowski said.

In southern Australia, where indigenous people were largely displaced by settlers “a lot of their knowledge of fire practices has been lost,” he added. Efforts to rebuild that knowledge are underway but the programmes are far less advanced than in the north of the country.

While discussions on how to improve land and fire management are slowly taking place, Australia’s scientific community has been warning the government to develop a plan to adapt to climate change for more than a decade.

Between 1939 and 2011, 16 major inquiries into bushfires have also called for greater integrated approaches between land planning and managing fire risks.

During that time, scientists have continued to warn of prolonged and more intense fire seasons driven by worsening global warming.

And yet, cities and developments have continued to expand further into bushlands and urban fringes, increasing communities’ exposure to high risk fires.

Richard Thornton, CEO of the Bushfire and Natural Hazards Cooperative Research Centre told CHN that besides climate change, Australians would have to re-think where and how they live.

While natural hazards are “an inevitable part of living in Australia”, Thornton said “our exposure is mostly human caused because of where we choose to live and work”.

He added evidence showed some areas bore an “unacceptably high” risk for building homes and infrastructure, such as one road access sites or ridges tops surrounded by bush. “Not coincidently, these are also the areas we often choose to build in because we value the location,” he said.

Many Australians “do not fully understand the risks in their landscape,” Keenan agreed, warning that communities needed access and control of long-term funding for education and building resilience.

For Sarah Boulter, senior research fellow at the National Climate Change Adaptation Research Facility at Griffith University, Australia has “outstanding knowledge and capabilities” to adapt to the reality of a warming world.

“But change takes time and requires commitment and support from a political and community level. There are some very hard decisions to be made,” she said.