Efforts to bring together different strands of the financing of climate action are being hampered at Cop25, says Bas Eickhout, while elsewhere steps forward are being made 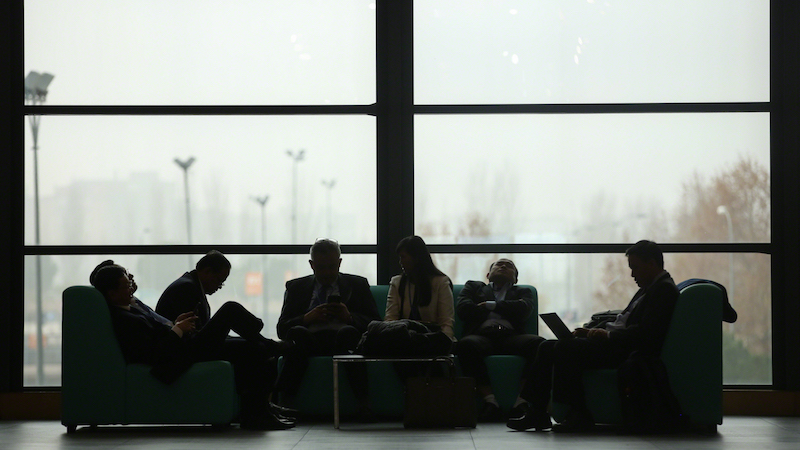 Delegates at Cop25 have been working long days and nights trying to break the impasse over rules for the Paris Agreement (Photo: IISD/ENB - Kiara Worth)

By Claire Stam for EURACTIV

“On Article 6, we are going to decide on how the rules will be for those countries wanting to exchange CO2-allowances. You have to avoid double counting, and you need to have decent rules. If not, you are really going to undermine the Paris Agreement,” Eickhout said, referring to the article of the Paris Agreement that covers market mechanisms for cutting carbon.

“And unfortunately, there are some players who would like to do so. Australia, Saudi Arabia, Brazil, they are clearly not fighting for environmental integrity in the rules. And if you don’t have that in place, you can do a lot of harms,” he warned.

Article 6 of the Paris Agreement contains three separate mechanisms for “voluntary cooperation” towards climate goals: two based on markets and a third based on “non-market approaches”.

The text outlines requirements for those taking part but leaves the details – the Article 6 “rulebook” – undecided. That is what is being negotiated in Madrid. Little known and highly technical until now, Article 6 is turning out to become a real “make or break” of the Paris Agreement.

Meanwhile, the financial world is slowing turning its back on fossil fuels, with investors and corporations getting vocal at Cop25, calling on governments to raise their climate ambition and put in place low-carbon economy pathways.

In a sign of the times, the highly anticipated initial public offering (IPO) valuation of Saudi’s state-owned oil giant Aramco came in below expectations, and it failed to appeal to international investors: international roadshows were cancelled as was the possibility of international listing, and the offering was lowered from 5% to 1.5%.

Aramco is listing its shares on Wednesday on the Saudi exchange after completing the largest IPO on record. But it falls short of the $2 trillion valuation long sought by Crown Prince Mohammed bin Salman.

Aramco priced its IPO at 32 riyals (7.71 euros) per share, the top of its indicative range. The state-owned firm is the world’s largest oil producer, pumping 10% of the world’s supply, and the most profitable company with its half-year net profit rising 12% to 42.35 billion euros.

On the other side of the oil and gas conversation, Spanish Repsol committed to changing its business model by adopting a target of net-zero CO2 emissions by 2050, a move that highlights a growing rift between companies that are integrating climate-related financial risks and impacts into their business strategy and those that are not.

In depth: The EU’s plan to become the first climate-neutral continent

The Dutch lawmaker said the private sector is changing but it needs to change a lot faster. “Climate cannot wait,” he said.

“This listing is still a huge investment in fossil fuels and it is not Paris aligned. It shows that regulations are needed,” the MEP added.

Eickhout added that in Madrid the international community is also carefully looking at what Europe is doing on sustainable finance.

“On financing, Europe is now really at the forefront of changes. The two decisions it made recently, on the EIB and the taxonomy, shows that Europe is changing its regulation,” he said, underlining that this will clearly have a significant impact on other countries in the world.

The EU adopted a rule book on sustainable investments on Thursday last week. This represents the first detailed taxonomy of what counts as a sustainable activity, or “green” product.

The initiative has been described by experts as “a clear signal” that “sustainable investment should become the new mainstream”. While highly technical, this is an important step forward to shaping investor decision-making and aligning investments with the Paris Agreement.

“This is fundamental because it is giving for the first time ever to the financial market a clear description of what we mean with sustainability. Sustainable development has been around since 1987 [note: when the Brundtland report was published] but in the financial world, it has never been identified. That’s a huge step we are doing,” Eickhout said.

The Dutch lawmaker also underlined that the EIB, which is making efforts to become the first climate bank, will be the first financial institution to implement the taxonomy.

“Everything is linked, Article 6 of the Paris Agreement, the EU taxonomy, the EIB turning into a climate bank. You can say we are connecting the dots here,” he said.

This piece was originally published on EURACTIV