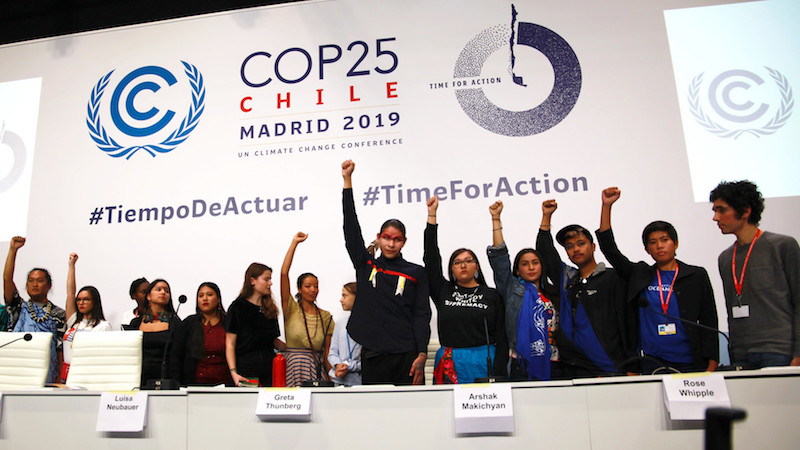 Greta Thunberg used a press conference to give other young people from around the world a chance to address the world's media (Photo: UNFCCC)

It was nearing 2:30am on Tuesday morning when the gavel came down on the UN climate change plenary.

It was a moment that again highlighted the folly of Donald Trump’s Paris Agreement policy.

China succeeded in delaying a key aspect of the rules of the Paris Agreement: the transparent reporting of national emissions. (See below for more details).

Diplomacy on these rules is now likely to be pushed into 2020 and possibly beyond. It means that as it leaves the Paris deal next year, the US may have to fight for tough rules from the weakened position of an observer nation.

Holding China to account for its carbon emissions – in part through global transparency rules – has been a US foreign policy goal for decades, across administrations red and blue.

For all Trump’s bluster about being tough on China, this looks like a gift for the world’s biggest polluter.

*** From We Mean Business: The Investor Agenda

On Monday, the largest-ever group of investors — 631 institutional investors managing over $37 trillion in assets — urged governments to phase out thermal coal power worldwide, put a price on carbon, end subsidies for fossil fuels, and strengthen NDCs in The Global Investor Statement to Governments on Climate Change, developed by the seven Founding Partners of The Investor Agenda.***

Get in touch. Tweet us at @chloefarand and @karlmathiesen. Or email [email protected] or [email protected]. And please help CHN by sharing our articles. If you want to share this newsletter it will be posted on the CHN website later each morning.

“I am perhaps more disappointed than in other meetings I have chaired,” said Paul Watkinson, the visibly tired chair of the UN’s technical body as he declared the meeting inconclusively over.

Slow progress in the first week of the talks means ministers are left to resolve the most contentious issues, in particular the rules for carbon markets. (Read our explainer here).

Alex Hanafi, director of multilateral climate strategy at the Environmental Defense Fund (EDF), said the time was ripe to get the issue resolved. “This year is the sweet spot to get this done,” he said. “If done right, it can provide countries… with the certainty they need to unlock private sector investment and prepare more ambitious climate plans next year.”

Negotiators could not agree on a text reviewing efforts to help vulnerable countries recover from loss and damage of climate impacts. The issue is likely to be taken up by ministers this week.

Efforts to align the time period that countries’ future climate pledges will cover from 2031 could not be resolved on Monday and was pushed back to June. CHN has you covered on what this means here.

A number of other issues were left unresolved and pushed back to further meetings. China twice called out developed countries for “impeding progress”, “damaging the multilateral process” and threatening to undermine trust between countries. Political tensions have started to emerge.

Backed by other major polluters from the developing world, China have sought to weaken the requirements for nations to report their carbon emissions under the global deal. This transparency is vital for holding nations to account.

The plenary saw a desperate, two hour huddle after which diplomats from the US, EU, Canada, Australia, Japan, small island states and Latin America all pleaded with chair Watkinson not to close the meeting without a deal but give them more negotiating time.

“We cannot explain to the world why we haven’t delivered on parts of the backbone of the Paris Agreement,” an EU diplomat said in the plenary.

They did not succeed. China, backed by India and African nations, demanded the meeting be closed without a decision. China’s diplomats then intervened a highly unusual seven times to ask Watkinson to confirm repeatedly that they had indeed won the day, saying the issue was “very important for this delegation”.

Also at Cop25… More than 50 finance ministers from Europe and vulnerable countries launched an initiative to mainstream climate finance into their domestic economic policies.

Meanwhile, Cop25 president and Chile’s environment minister Carolina Schmidt told reporters the country’s congress would vote on a climate law next week that would set its carbon neutrality goal by 2050 into law. Chile had planned to raise its Paris target at these talks, but that was shelved.

“We need to be able to pass this law because we need to prove that we are willing to to tackle this urgent situation,” said Schmidt. “We need to take into account the current situation in Chile and need to have a development model that is more inclusive,” she added.

“Keep your oil and gas in the ground,” the letters state, urging both countries to “apply international climate leadership to all domestic action”.

In September, the group, which includes Greta Thunberg and American climate striker Alexandria Villaseñor, filed a legal complaint to the UN against Argentina, Brazil, France, Germany, and Turkey for violating their rights as children by failing to adequately reduce emissions.

Meanwhile, Thunberg has been using her exceptional media platform to give others a voice. “It’s time to let others speak,” she told a packed room of reporters.

“Indigenous people worldwide are just asking to be listened to, to be stood with,” said Rose Whipple, an 18-year-old climate activist from Santee Dakota, Ho-Chunk, Winnebago. “It is up to everyone of us to build movements that center the rights of indigenous people.”

Elsewhere in the talks… Youth activists ambushed Shell’s vice president for new energies Duncan van Bergen and it looked like this.

Separately, former US vice president Al Gore hailed youth climate strikers for their “moral authority”. “They’re right in what they say, we are not facing up to this challenge,” he said.

The UN agenda for Tuesday is here.

What to watch out for on Tuesday…

Petteri Taalas, of the World Meteorological Organization, UN General Assembly president Tijjani Muhammad-Bande and Spanish singer Alejandro Sanz are also due to talk. The full list of speakers can be found here.

The UK Cop26 presidency is organising a high-level event on the growing momentum for setting net zero emissions targets. The UK was the first major economy to set a carbon neutrality target in law.

Finally, Climate Action Tracker is due to launch an updated global assessment of countries’ climate policies.

That’s it from us. Have a great day.