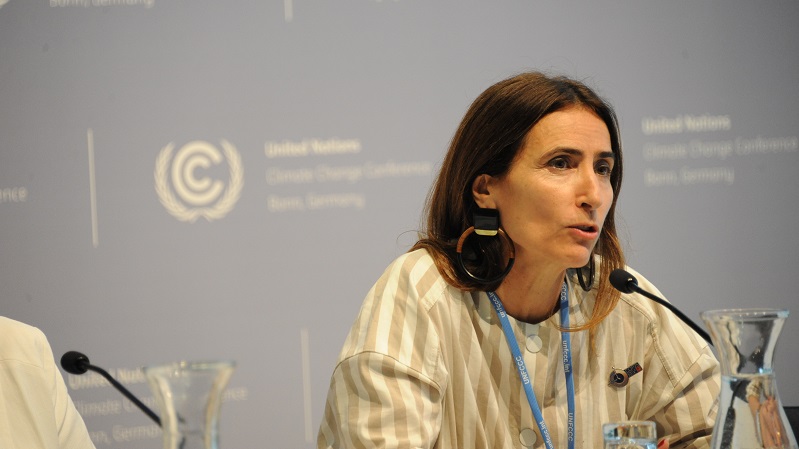 Cop25 president Carolina Schmidt has called on countries to join a progressive alliance of countries ahead of Cop25. (Photo: UN Climate Change/Flickr)

In rhetoric at least, this is a shift of focus from the prospect of difficult negotiations over the final rules of the Paris Agreement on global carbon markets – a contentious issue diplomats warn could make or break efforts to curb emissions.

Chile, which is leading the talks, and Spain, the host, hope to use the summit to grow a progressive coalition of countries.

Cop25 president and Chile’s environment minister Carolina Schmidt has urged countries to join the alliance ahead of the talks. An updated list of countries ready to strengthen their climate targets is to be announced during the summit – piling up pressure on the laggards.

Environment minister Teresa Ribera told Climate Home News that Spain could “not expect to be silent” on the issue of raising ambition as next year’s deadline for countries to revisit their plans looms.

The Marshall Islands is floating the idea of an early “depositing ceremony” for countries committed to raising their pledges to do so on Earth Day in April next year. As small and vulnerable countries kickstart the race for ambition, the world’s largest emitters remain silent.

Look out for our daily updates

As normal at Cop25, CHN will be bringing you all the news, every day, in one easy-to-read morning bulletin. Look out for yours and please share our sign up link with your friends.

It’s been a busy week for the EU as incoming commission president Ursula Von der Leyen and her team prepare to take on their new roles on Sunday.

In Strasbourg, the EU parliament declared a climate emergency ramping up pressure on Brussels to walk the talk on ambition.

Leaked documents seen by the Financial Times, show the commission will come up with a “comprehensive plan” to increase the bloc’s 2030 target to “at least 50% and towards 55%” by the autumn of 2020. NGOs say the timing leaves too little time for an agreement to be found before Cop26.

Meanwhile, discussions over climate neutrality are intensifying. The EU Council is being urged to back a goal for carbon neutrality by 2050 at a meeting on December 12-13 – the last two days of Cop25. Poland, Hungary and Czech Republic are yet to come onside.

But a target doesn’t make a plan. The European Investment Bank warned the EU needs to make a “tremendous effort” to develop a comprehensive climate strategy as green investments lag behind the US and China.

And in Berlin, German Chancellor Angela Merkel said she didn’t find it “right” for the bank to end lending to natural gas projects by the end of 2021. Germany backed the EIB’s decision to end funding for fossil fuels projects just two weeks ago.

The UK held its first climate debate ahead of the country’s general election next month. The issue has rocketed in importance among voters and each major party is keen to showcase their green credentials.

Notably absent were conservative Prime Minister Boris Johnson and Brexit Party leader Nigel Farage who refused to take part despite repeated invitations. Dripping ice sculptures stood in the absentees’ seats –  a reminder of the melting glaciers in the face of political inaction. Ouch!