Leaders of most major parties presented their ideas for meeting tough climate goals, but the Conservative prime minister declined 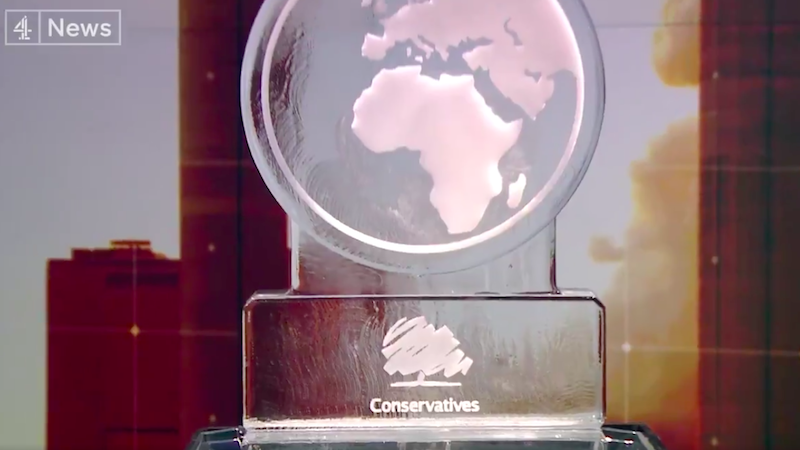 Leaders of Britain’s major political parties – minus the governing Tories – have battled it out over their green credentials in the UK’s first ever general election debate on the climate emergency.

The leaders of the Labour Party, SNP, Liberal Democrats, Plaid Cymru and the Green Party all participated in the detailed discussion on how to reduce the UK’s carbon emissions and restore nature, which ranged from greenhouse gas reduction targets, to zero-carbon homes, to meat consumption.

Conservative leader Boris Johnson chose not to participate, saying ahead of the debate that he did not want environmental issues to be “siloed”. Dripping ice sculptures stood where the leaders of the Conservative and Brexit parties would have been – a reminder of the glaciers that continue to melt while politicians fail to take action.

The event, hosted by broadcaster Channel 4, comes ahead of the general election on December 12.

Tune in at 7pm on 4 and here on Twitter: https://t.co/GXl7XiFbgA pic.twitter.com/niPE5MLdGV

There was no debate about the reality or urgency of tackling climate change; all leaders were broadly in agreement that emissions need to be reduced steeply in the coming years, and that nature needs to be restored – the Liberal Democrats’ Jo Swinson was the only leader who did not support a 2030 net-zero goal, instead advocating for a 2045 target.

Instead, it was a debate that, as the SNP’s Nicola Sturgeon emphasised, was largely about “common unity and purpose”, and the questions focused on the measures that the parties supported to achieve these goals. Brexit, which has dominated much of the election to date, was largely off the table during this discussion, although Swinson in particular stressed that she considered leaving the EU a “climate crime”.

While there was broad support for renewables, Corbyn was forced to defend his support for nuclear power, with Sturgeon demanding to know why he wasn’t ruling out the technology. “There has to be a baseline of production of electricity from some totally sustainable source,” said Corbyn, adding that any party that came into power would have to deal with a mixed power grid.

There was also widespread enthusiasm for zero-carbon homes, although the leaders struggled to answer exactly how they would retrofit the country’s existing housing stock. The Green Party’s Sian Berry said that £38 billion of the £100 billion that the party would spend on climate change was earmarked for improving the efficiency of the UK’s housing stock.

The question of whether British people should eat less meat proved difficult to navigate. While farming has a generally detrimental impact on biodiversity, some leaders were evidently wary of alienating rural voters. Plaid Cymru’s leader, Adam Price, was reluctant to acknowledge that Wales’ sheep farming industry might have to change in order to improve the nation’s biodiversity and reduce its carbon footprint, stressing that farmers were “allies” rather than “enemies”. It was an argument that didn’t sit well with expert viewers: Doug Parr, Greenpeace UK’s chief scientist, tweeted that Price was “a bit all over the place” regarding farming.

Climate change is expected to be a key topic in the general election. Voters will go to the polls following a year of heightened activism, including protests by Extinction Rebellion and school strikes inspired by Greta Thunberg. A YouGov poll in November found that the environment had rocketed in importance for voters: in 2017, only 8% of British voters considered it one of the top three most important issues; today a quarter place it among their top three concerns, tied in fourth place with the economy.

It was the first time that there had been a TV election debate on nature and climate. The event was organised after a petition by the climate NGO Possible, which ran a petition signed by more than 200,000 people. Max Wakefield, director at Possible, said that the debate “has set a new standard for political discourse around elections” and that it was clear that the “climate and nature emergency” had not previously received the attention it deserved.

On Thursday, Buzzfeed reported that the Conservatives had threatened Channel 4 with a review of its broadcasting obligations. A party spokesperson told the Guardian the ice sculpture in place of Johnson was a “a provocative partisan stunt”.

The Conservative manifesto pledges to reduce emissions to net-zero by 2050, which is well behind most of the other parties. It also promises that the party will invest £800 million in carbon capture and storage, as well as another £500 million to help energy-intensive industries to low-carbon techniques.

Greenpeace has criticised the Conservative manifesto as “half-baked”, while Caroline Lucas, a Green Party MP, condemned Johnson’s failure to appear at the debate.

“Two thirds of the public, and half of his own voters want to see him join the world’s first televised leaders climate and nature debate,” said Lucas. “It’s outrageous that he can’t spare an hour to address the greatest challenges of our time. How are we supposed to trust the prime minister’s word that he’s taking climate and nature emergency seriously?”