In Tanzania, ownership of the forest offers new prospects for old loggers

In one of Africa’s fastest deforesting nations, community control over the land offers villages new income, infrastructure and dignity 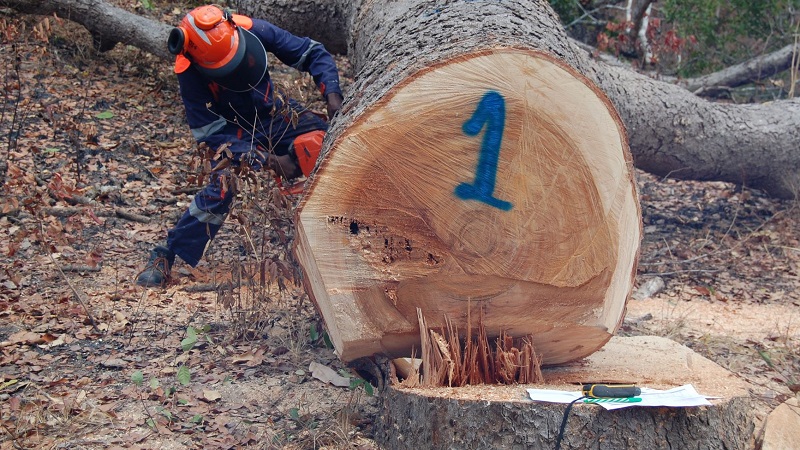 After cutting trees in Angai forest, the trees and tree stumps are marked for identification (Photo: Christabel Ligami)

Yusuph Juma can confidently drive his truck fully loaded with timber past the traffic police officers without being stopped or questioned of the origin and destination of the timber.

He is a licensed and recognised logger in Angai forest in the south east of Tanzania and has nothing to fear while taking his timber for sell.

Years back, when his business was illicit, he says he would not attempt that. Instead he would either transport his timber late at night or bribe the police.

“Now I have nothing to fear. I have been licensed to cut and export timber from the forest here,” Juma told Climate Home News.

“I have been permitted to cut about 1300 trees in this area between June and December at my own pace. But I have paid for it,” Juma said.

He sells his timber mostly to China and locally to timber wholesalers in Dar Es Salaam.

Juma’s transformation was made possible by a 2002 law, which provided a legal basis for communities to own and manage forest reserves, and a clear pathway transfer land rights to the community.

According to the United Nation’s Food and Agricultural Organization (FAO), Tanzania lost over 5.86 million hectares of forest between 2000 and 2015. The report also found more than 70% of the harvested trees in the forests are unaccounted for due to illegal logging and as a result the government looses revenue.

The measures implemented in 2002 – including the licensing system Juma works under – were designed to control illegal logging. Now people can legally harvest trees in the forest only after getting approval.

Liwale region is one of the communities around Angai Forest designated as a village forest reserve (VFR), as people in the region have the right to use the forest for its resources – mainly the trees – while conserving it. This has been made possible under Tanzania’s community-based conservation programme called participatory forest management (PFM).

The scheme at Angai has been around for over a decade, but lack of know-how on the ground has meant slow implementation. However this seems to be changing.

Local organisations have banded together with 14 communities to establish Angai Villages Land Forest Reserve (AVLFR). From AVLFR, they aim to source and sell sustainably harvested timber and other forest products, as well as enhancing governance and business capacities and improving land and resource rights. A portion of land in Angai forest has been set aside for agricultural practices where people are allowed to rotationally cultivate crops like maize and beans. Another has been set aside for firewood collection. 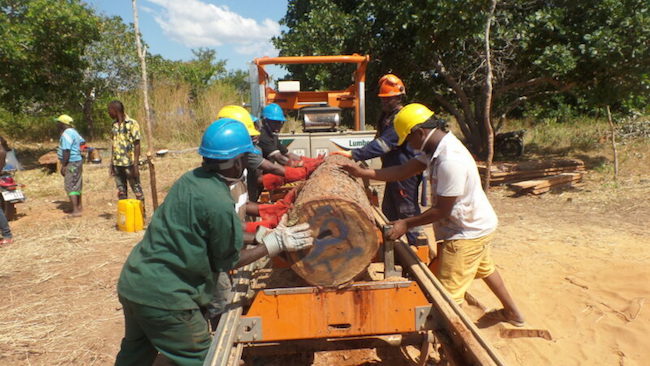 Two projects in the area have been set up in the region under the UN’s Redd+ scheme, which allows communities to sell carbon credits in return for halting deforestation.

In partnership with the Tanzanian government, the Clinton Climate Initiative (CCI) chose Angai as the pilot site for its five-year Redd+ program in 2008, which was supported by funds from the Norwegian government.

Tanzania was chosen because it featured highly on international agendas on Redd+ due to its large forest estates (48.1 million ha) and high estimated deforestation rates (1.1% of forest size per year).

One of the sites is managed by the Mpingo Conservation and Development Initiative (MCDI). MCDI Angai forest coordinator Idi Hamisi, said that before the programme started, all the resources from the forest harvest used to go to the central government and the villages had no control over their resources.

“MCDI officials educate locals on forest management, how they can generate resources from the forest and how to manage the resources generated,” Hamisi said.

So far, he said, participating communities have earned more than $500,000 through the programme in the five years since harvesting began. 35% of this income goes to the village natural resources committee to pay for forest management activities like patrols; 5% goes to the district; the remaining 60% goes to the village council.

“This communal income is spent on village development projects, and provides local people with concrete incentives to manage forests sustainably,” he said.

The villages of Liwale and Kitogoro are two of these communities. They have been harvesting timber through the PFM programme for two years, using their profits to bolster schools and build more clinics.

The management of the forest is overseen by the village council committee, which is appointed by and composed of village residents.

Hamisi explained the council officials interview potential loggers, who then pay a fee to harvest timber. The loggers are then granted a license to harvest under the supervision of the committee. 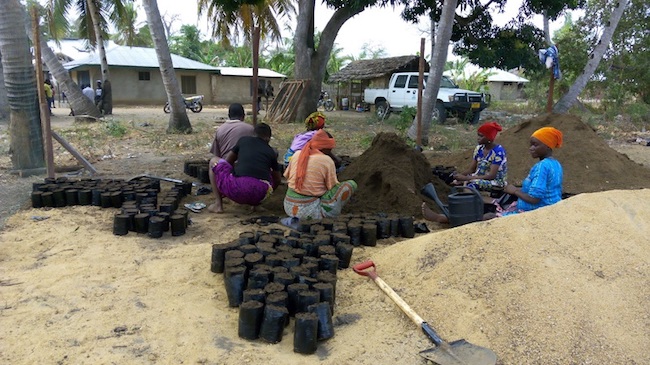 Preparation of the tree seedlings in the nursery by local women for replanting after the harvesting season (Photo: Christabel Ligami)

“They have to first give the bank slip to show that they have deposited the money into the community’s account before they are given the permit,” said Abdi Sheikh, Kitogoro village executive officer. “There after we ensure that only the marked trees based on how much they have paid are cut. Therefore the council’s officials have to be there all the time until he finishes the tree-cutting.”

The timber is sold at a price negotiated between the logger and the council, but must be at least $90 per cubic meter.

An additional national safeguard against illegal logging is a stamp used to ensure that logs are legally harvested. The stamp contains a unique code that is hammered into each log and stump, allowing authorities to track the movement of timber in the country. Logs cannot be legally transported without the stamp.

As a result of the programme, councils of each of the two villages have been able to build a dispensary that are now equipped with solar panels. Previously, the only nearby hospital was 180km away.

“Mothers opted to deliver at home instead of walking for that long distance to go the hospital,” said Liwale village executive officer Ahmed Mabweha.

Liwale council approved the purchase of motorcycles and bicycles to help with forest patrols. In cases where illegal activity has been detected, those responsible have been arrested and fined by the council.

Most importantly, locals report a drastic reduction in the local deforestation rate. Mabweha said residents replant trees in the forest after the harvesting season, focusing mostly on indigenous species such as mahogany.

However, challenges remain. The villages are struggling to attract buyers for their timber. MCDI is helping the villages find customers through advertisements in the local media.

Numerous studies have shown that community forest management – such as is being deployed in Angai – represent a valuable and often effective way of protecting tropical forests.

But in a 2018 study on Redd+ in Tanzania, Andreas Scheba, a post-doctoral research fellow at South Africa’s Human Sciences Research Council, found villagers around Angai still do not have full control or ownership of the forest.

“To fully benefit from the community-based forest management , there must be legal and agreed upon land tenure classified as village land and not just general communal/village land,” said Scheba, adding that the current Tanzanian system did not consider this and thus it was not as effective as expected.

“Based on my study and interviews in Angai, the villagers, after a long period of time of participating in the forest development and conservation projects, they are slowly losing their hopes of ownership of the forest and are giving up,” he said.

Jasper Makala, chief executive officer of the NGO MCDI, which manages one of the projects, said because land was owned by the government of Tanzania there was no conflict between individual entitlements to the forest. The communities around Angai were trained on the importance of sustainable management of the forest for their own benefit.

“The programme has created an avenue for the people to earn revenue for the development in the community.  Schools, boreholes for water access and upgrade health facilities in the area are some of the major projects that the community has been able to do as a result of the revenue generated from the timber sales,” Makala said.

“The revenues generated from the timber sales are 100% owned and spent by the community while conserving the forest.”