Cuts to subsidies, imposed without an alternative, led to price rises, strife and, eventually, a government backdown 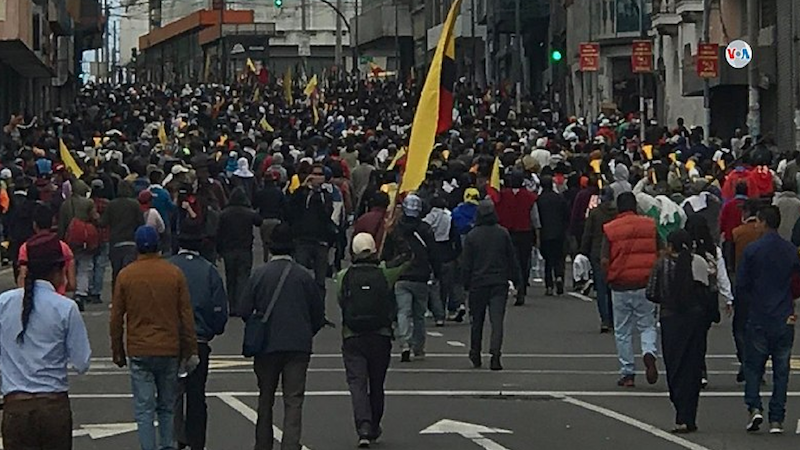 Protesters on the streets of Quito this week (Photo: LLs/CC)

Calm has returned to the streets of Quito after Ecuador’s government agreed to reinstate fuel subsidies following 11 days of nationwide, violent protests.

Peace talks between indigenous leaders and other protest groups, president Lenin Moreno and a United Nations mediator proved successful on Sunday. But only after the worst civil unrest for over a decade paralysed the country for twelve days, and cost seven people their lives.

The president agreed to cancel the subsidy cut (known as decree 883), with an agreement between the two sides to consult on a new law.

‘We were ecologists before the capitalists’: the gilets jaunes and climate justice

The subsidy cut was part of a package of austerity obligations under a $4.2 billion arrangement with the International Monetary Fund.

Fossil fuel subsidy cuts are supposed to help the environment, signalling an end to fossil fuel dominance, and the beginning of heavy investment in alternatives, while also saving taxpayers money.

In September, the UN secretary general António Guterres gathered world leaders to a summit in New York where he demanded an end to this kind of support for coal, oil and gas.

Moreno – who won by popular vote in 2017 – told reporters last week that Ecuador’s fuel subsidies, which have been in place for decades, “distort” the economy.

But the cut came without the backing of immediate renewable alternatives. 43% of Ecuador’s electricity comes from fossil fuels, 54% from hydro and 2% from other renewables. Most drivers are tied to using fossil fuels. On 3 October, prices for gasoline and diesel rose by 25-75% overnight.

The protests began the same day with a transport strike. The immediate rise in fuel prices forced bus operators and taxis to hike up fares. For the vast majority of Ecuadorians, public buses are the only way to navigate Quito’s looping, dangerous tunnels and overhead highways.

A single fare on one of these often overcrowded, questionably-driven buses – which would never meet European safety standards – is 25¢. The subsidy cut resulted in fares as high as 40¢ for a single journey.

Overnight millions of people were struggling to get to work or school. Many people take five buses a day to get to work in Quito, said Maggie Criollo, an activist for Solidarios Chiriquí, a local group that provided emergency food, water and medicine for indigenous people that travelled to Quito to protest.

“The subsidy goes beyond gasoline and diesel. It affects all the freight vehicles loaded with products for transportation,” said Johana Sánchez, an Ecuadorian cultural sociologist and journalist. The price of goods and food rose.

The minimum wage in Ecuador is US$300 to $400 a month. According to the World Bank, nearly a quarter of Ecuador’s population live under the poverty line. The price hikes, coupled with Ecuador’s low wages, meant people could not cope with the price increases.

“People are angry because of the economic measures that Lenin Moreno’s nefarious government is applying. We have to respond in some way,” says Criollo.

Like France’s gilet jaunes, who also began their protests because of regressive fuel policies, people took to the streets, roads were blockaded, airports closed, shops and schools shut their gates. The entire nation came to a sudden halt.

Leading the protests have been indigenous families, groups and activists, who are also national champions for environmental reforms. “Indigenous people go to the head of the protest and are also against the exploitation of the land,” says Sánchez.

People protesting want a safe environment and stable economy, says Sánchez, “and I want to join them in any way that I can.”