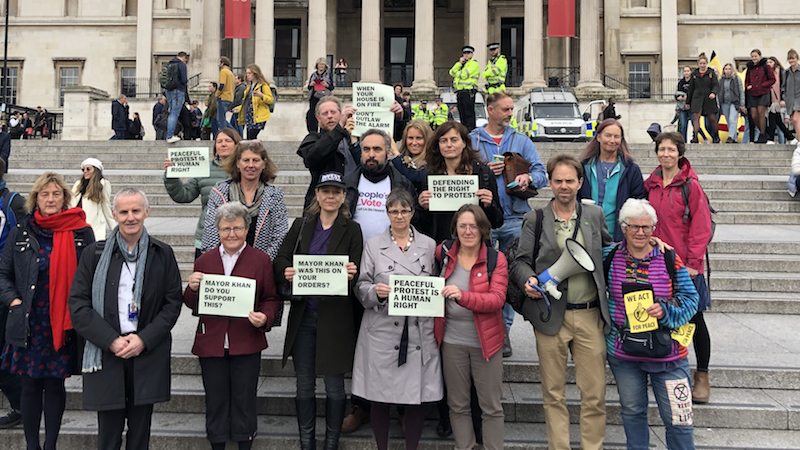 Green and Labour politicians gathered in Trafalgar Square on Tuesday morning, in protest against the ban. (Photo: Natalie Sauer)

Formally known as Section 14 Public Order Act, the ban instructs “any assembly to linked to Extinction Rebellion ‘Autumn Uprising’ (publicised as being from 7th October to 19th October at 1800 hours) [to] cease their protests within London by 2100 hours 14 October”.

The ban, which may have been ordered by the Home Office, abruptly rendered Extinction Rebellion’s eight day occupation of Trafalgar Square illegal. Police forces flooded the space, which until then the group had been occupying legally, dismantling tents and arresting dozens of protesters, including Green MEP Ellie Chowns.

The imposition of the order saw 92 arrests.

It came on the back of a week of disruption in which protesters have blocked roads, stopped flights, targeted public and private institutions and been subjected to intense police pressure. On Tuesday afternoon the number of arrests had risen to 1,489, according to the Metropolitan Police.

The decision to shut down the rebellion prompted dozens of politicians, the majority of them Greens, to defy the ban and protest on Trafalgar Square Tuesday afternoon.

MPs and MEPs sung, paced the square and took turn to give speeches on the steps that once witnessed mass anti-apartheid demonstrations.

Standing against a backdrop of policemen, Extinction Rebellion spokesperson and philosopher Rupert Read, told a small crowd that the moment marked a historical turning point.

“We’re not totally sure whether this is legal or not. It’s incredible that it might not be, this is obviously a very peaceful protest. We’re in a really bad situation in this country if it’s come to the situation where this is not allowed,” said Read.

Green peer Jenny Jones is launching a legal challenge to the order on the grounds that it breaches protesters’ right to freedom of expression and to protest under the European Convention. Lawyers representing Jones also believe the protest ban does not fall within the remit of Section 14, which is to “manage an assembly, not to ban it outright,” a judicial action pre-action letter seen by CHN read.

Tobias Garnett, a member of the Extinction Rebellion legal strategy team overseeing the challenge, told CHN he hoped the High Court would examine the case on Wednesday.

“We are fairly confident that this is going to succeed,” Garnett said, “because it’s a disproportionate curtailment of people’s rights, but frankly we would prefer that, rather than spending their time and money trying to silence protest in London, the government and police told the truth and acted now on the ecological emergency.”

Co-leader of the UK Green Party, Sian Berry said: “We are here today to ask the mayor of London whether he supports having a complete ban on Extinction Rebellion throughout the whole of Greater London. Leaving people with no place to protest is a literally a ban on your human right to free expression and free assembly across a whole city of 8.5 million people.”

London mayor Sadiq Khan has declared a climate emergency and repeatedly called out the British government for “dragging its feet” on climate action.

“I am seeking further information from senior officers about the operational decision to impose a Section 14 order on the Extinction Rebellion Autumn Uprising – including at Trafalgar Square – and why this was necessary,” he said in a statement, suggesting that he may not have been warned of the Metropolitan Police’s decision.

“I believe the right to peaceful and lawful protest must always be upheld.”

“However, illegal action by some protestors over the past eight days has put undue pressure on already overstretched police officers, and demonstrators should bear this in mind when considering any further actions.”

Laurence Taylor, deputy assistant commissioner of London’s Metropolitan Police, defended the order, noting the police “have made good progress clearing Trafalgar Square and other sites to enable the capital to return to normal following more than a week of protests”.

“After nine days of disruption we felt it is entirely proportionate and reasonable to impose this condition because of the cumulative impact of these protests,” she said, adding that the order only applied to the Extinction Rebellion ‘Autumn Uprising’.

“If Extinction Rebellion, or any other group, come to us with a proposal for lawful protests then of course we will discuss that with them,” Taylor said.

Should the legal challenge fail, Read told CHN that “the plan is just to carry on. The great thing about mass non-violent direct action is that it’s very hard for the authorities to deal with, because there are so many of us they can’t arrest us all”.

“In a way what we’ve seemingly forced the authorities to do is to make a difficult and I think it will be widely seen as a wrong decision. That is the benefit of mass direct action… I’m hoping and I believe that more people will now rally to this cause,” Read said.

Greta Thunberg lent her support to the movement on Tuesday evening, tweeting “If standing up against the climate and ecological breakdown and for humanity is against the rules then the rules must be broken”.