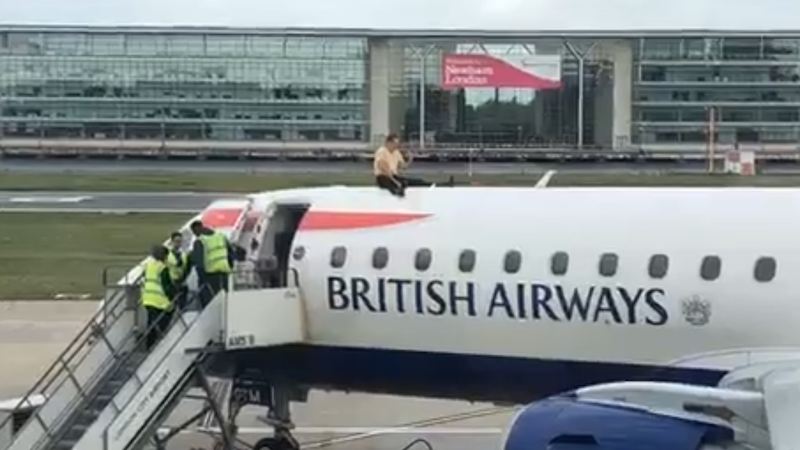 By Natalie Sauer and Chloé Farand

Paralympics medalist James Brown climbed on top of a British Airways plane at London City Airport, in a protest aimed at the site’s £480m expansion plans.

The action was part of an Extinction Rebellion protest which targeted the airport on Thursday.

Brown, who is vision impaired and won bronze in cycling at the London 2012 games, was videoed by Extinction Rebellion climbing from the boarding steps while aircraft attendants looked on. It was unclear whether he had glued himself to the aircraft.

James Brown, paraolympian, atop a British Airways plane on the runway at City airport London.

Talking from the disabled toilets in City Airport before boarding the British Airways flight to Amsterdam, Brown said: “I’m trying to make a difference to this crisis, this substantial crisis that we face. I booked a flight to Amsterdam at 13.05.

“I will attempt to climb on the roof of the plane. I have glue with me and maybe cause a little bit of disruption. That is what we need, civil disobedience is the only thing that makes a difference under these circumstances.

“The average salary of people who fly from this airport is £100,000 plus. All the people who live around this airport don’t benefit from the enormous wealth that is generates. I’m looking forward to boarding.”

“I will attempt to climb on the roof of the plane. I have glue with me and maybe cause a little bit of disruption. That is what we need, civil disobedience,” said paralympics medalist James Brown. #ExtinctionRebellion https://t.co/9bZS1x0QjG pic.twitter.com/HxWohqnBQA

The flight was cancelled.

A woman filming the protest from inside the airport was also arrested. The footage, which captured her arrest, showed a police officer telling her: “I have had information that you have helped this gentleman to get on the plane. That you have given him a ticket to do so. You are under arrest on suspicion of aiding and abetting, endangering an aircraft and public nuisance.”

The officer said her phone would also be seized since she used it to record the incident.

Responding to Brown’s video, Claire Perry, nominee president for next year’s climate talks and former UK minister for energy and clean growth, hit back at the use of civil disobedience to achieve change.

“What we need now is to follow the global science and cut emissions to net zero by 2050 incl[uding] in hardest to reach areas like steel making which creates more than 3x the emissions of aviation. Let’s solve the problem for ever not scare people to make headlines for 5 minutes,” she tweeted.

Flying generates just under 3% of global emissions, roughly the same as Germany. The UN aviation body anticipates emissions to increase by up to 300% by 2050 under business as usual. Globally, steel is responsible for 7% to 9% of all direct emissions from fossil fuels, according to the World Steel Association.

Hundreds of activists attempted to block the airport Thursday morning, in protest at the site’s £480m expansion plans.

Apart from Brown’s effort, the turnout however failed to disrupt other airport traffic, which remained “fully operational”, London City Airport tweeted. 60 planes had departed or arrived by 9.15am.

As part of its expansion project, London City Airport has announced eight new aircraft stands equivalent to the size of 11 football pitches, a new taxiway and a quadrupling of its size.

Protesters have said that they will relay in and out to occupy and shut down the airport for three days. It marks the movement’s most radical action to disrupt air traffic since activists attempted but failed to fly drones over Heathrow Airport in September, resulting in 19 arrests.

“London City Airport is planning to roughly double its numbers of flights,” philosopher and Extinction Rebellion spokesman Rupert Read  said. “It is located in a highly built up area meaning that its flights cause a lot of noise-misery as well, of course, as climate-deadly pollution. It is used disproportionately by private jets and by financiers, businesspeople and other members of the polluter elite flying in and out of the City of London, when often they could do what they need just as well by using digital telecommunications. This has to stop and Extinction Rebellion are here to stop it.“

Extinction Rebellion said on Thursday morning there were roughly 250 activists on site trying to block transport access to the area via road and rail.

Despite failing to cause significant disruption to air traffic, the mood on site appeared largely positive, with protesters of various ages and backgrounds dancing and chanting for climate justice under the autumnal sun. Police picked up dozens of protesters and loaded them into vans.

“It’s mainstream science that we can starve in our lifetime,” one heavily escorted protester shouted as police took him to a van. “The government is failing to protect us from climate breakdown and ecological collapse. There is a disconnect. We are sleepwalking into catastrophe.”

Another man clambered over scaffolding and barbed wire to stand on the entrance’s rooftop.

Mat, an employee at a wildlife charity who declined to give his second name, said he remained hopeful the blockade would hold despite its failure to cause significant disruption.

“This is not intended not to be a one-day protest,” he said “We’re expecting wave after wave people who are willing to take a stand and keep a spotlight on the climate crisis.”

CHN asked him whether he would be willing to be arrested in an action that had been declared illegal.

“I have young children so it’s difficult to think that I’d be in a situation where I’d have a record and also to think I’d spend a night in a police cell,” he said. “However, those children are the reasons I’m here. Their future is in jeopardy. At the moment without this kind of direct actions attention is not being given to the crisis.”

Responding to concerns over the aviation sector’s emissions, London City Airport said that it had slashed emissions by 30% over the past five years and were committed to achieving the UK target of net-zero 2050. This does not include the CO2 released by flights in and out of the facility.