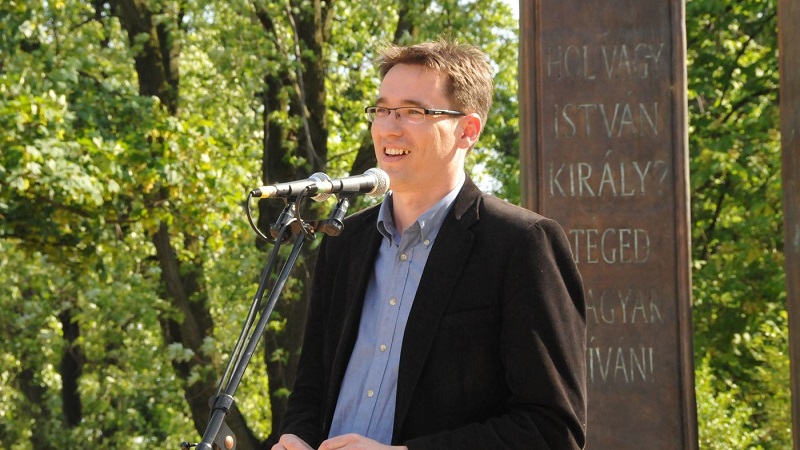 Karácsony Gergely, from the green Dialogue for Hungary party, was elected mayor of Budapest on Sunday in a blow to the ruling nationalist Fidesz party. (Photo: Budapest Kertváros LMP/Flickr)

Budapest’s newly-elected mayor has promised to transform the Hungarian capital into a “green and socially just” city in a major blow to Viktor Orbán’s right-wing nationalist government.

Gergely Karácsony, 44, a pro-European centre-left candidate, won 50.86% of the vote in Sunday’s mayoral election in a surprise victory over the incumbent nationalist Istvan Tarlos.

Tarlos, who had been in office since 2010, was supported by Orbán’s right-wing Fidesz party. Karácsony, from the green Dialogue for Hungary party, was backed by a coalition of opposition parties to the ruling Fidesz. Besides Budapest, opposition parties now control 10 of the countries’s 23 biggest cities.

Karácsony has compared his run to Istanbul’s mayoral election earlier this year, when the candidate backed by president Recep Tayyip Erdoğan’s party was defeated by opposition challenger Ekrem İmamoğlu.

“Istanbul voted against an aggressive illiberal power in many ways similar to Orban’s regime,” Karacsony told AFP before the vote. Karácsony met with İmamoğlu in the lead up to the Budapest election.

Karácsony made climate action one of the three pillars of his vision for the city, pledging to boost the transition towards clean energy, and build climate resilience.

He promised to declare a climate emergency and to launch an information campaign about climate change.

His manifesto includes commitments to “prioritise the climate aspects of all new development projects”, with city-wide legislation enforcing clean energy requirements for all new municipality buildings and improve energy efficiency.

In an overhaul of the city’s public transport system, Karácsony (whose surname means ‘Christmas’) committed to expand and improve the existing system, ensure cheaper prices and make the city more bike-friendly. Other proposed measures include the introduction of law emissions zones and a “green corridor” to expand Budapest’ parks and green spaces.

Cities have become key players to jump-start decarbonisation at the local level. Globally, cities consume over two-thirds of the world’s energy and account for more than 70% of CO2 emissions, according to the C40 network of cities.

The proposals to green Budapest contrast with prime minister Orbán’s climate record and the downgrade of the Hungary’s environmental protection laws since he came to power in 2010.

Hungary was one of four countries to veto an EU agreement in June to reduce emissions to net zero by 2050. Along with Poland and Czech Republic, Hungary has not yet agreed to the EU’s long-term decarbonisation goal.

At the UN climate action summit in New York last month, Hungary’s president János Áder promised to phase out all coal-powered electricity production by 2030 – but critics were left unimpressed by the proposal.

Hungary isn’t as coal-reliant as some of its central and eastern European neighbours. Coal generated 15.5% of Hungary’s electricity in 2017, according to the OECD, and coal mining and power production across the country are already in decline.

An EU poll, carried out earlier this year, found that 85% of people in Hungary believe climate change to be a “very serious” problem, above the EU average of 79%.