Governments and businesses are not living up to voluntary commitments to halve tropical forest loss and restore 150 million hectares by 2020, report finds 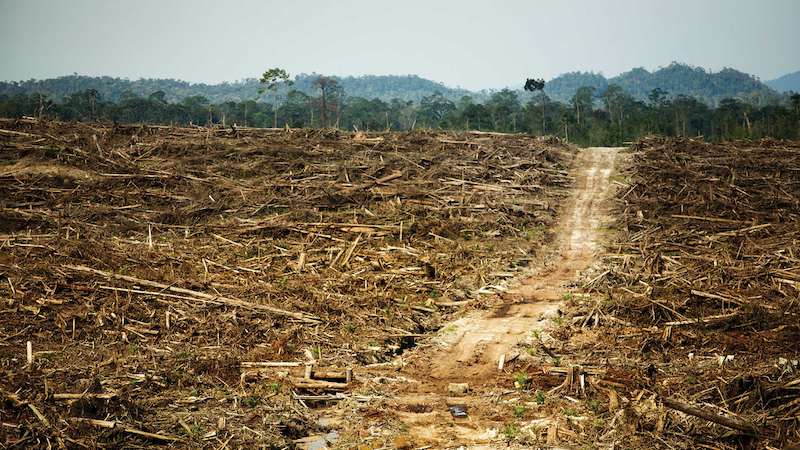 Governments and businesses that pledged to halve deforestation by 2020 are failing to meet their commitments, a global assessment on the states of forests has found.

In September 2014, a coalition of governments, companies, civil society and indigenous people organisations signed up to the New York Declaration on Forests, promising to halve tropical deforestation and restore 150 million hectares of land by 2020.

Under the 10-point declaration, signatories said they would put an end to deforestation by 2030.

A progress report on the declaration’s goals found that between 2014 and 2018, an area of tree cover the size of the UK, or about 26 million hectares, was lost every year. The annual rate of global deforestation increased by 43%.

During that time, tropical forests loss accounted for more than 90% of global deforestation, with the Amazon and the Congo Basin taking the biggest hit. Globally, annual carbon emissions from tropical tree cover loss were equivalent to those released by the European Union, the report found.

The review concluded that less than 20% of the declaration’s overall restoration goals have been met. None of the multinational companies that promised deforestation-free supply chains by 2020 are on track to deliver.

Craig Hansen, vice president for food, forest, water and the ocean at the World Resources Institute, described the findings as a “crying call for action”.

Five years on from the declaration “we are losing the battle but we should not give up hope,” he said.

41 governments and more than 20 local and regional authorities took the pledge at a 2014 UN summit held by Ban Ki-Moon in New York. These included the European Union, the US, Canada, the UK, France, Germany, Japan, Kenya, Ethiopia and the Democratic Republic of the Congo. Three Brazilian states, five Mexican states and six Peruvian states also signed up.

The report found action had so far “lacked ambition and remained isolated”, failing to deal with multiple interconnected deforestation drivers.

Comment: Europeans must face their own role in the destruction of the Amazon

As forests continue to be cleared for farming, mining and other money-making enterprises, the report warned that “short-term profits of forest conversion still trump the long-term benefits of forest conservation and restoration in many land-use decisions”.

Alison Hoare, senior research fellow at Chatham House, one of the organisations taking part in the assessment, told Climate Home News governments and businesses “did not realise how difficult it would be” to address deforestation.

Hoare said the process had a been a “reality check” about the complexity of land and forest governance and the decision-making process around land tenure.

While the forest and timber sectors improved their governance and adopted more sustainable practices, their efforts are being undermined by other sectors such as agriculture, mining and infrastructure, she added. Commercial agriculture remains the main driver of deforestation.

The role of consumer power in helping to “change the economic incentive and decision-making process” has to play a bigger role, she said, calling on the EU to “explore options for legislation to encourage businesses to implement controls in their supply chains”.

Earlier this year, the EU Commission opened the door to impose regulation on the supply chains of companies importing into its market.

Meanwhile restoration initiatives “have been slow to gain traction”, the report said, with most tree planting efforts taking place outside of natural forests.

Ingrid Schulte, a lead author of the report and land use consultant at Climate Focus, a think-tank which coordinated 25 partner organisations to produce the assessment, told CHN that while every kind of restoration is good – with few caveats – land restoration projects fit different objectives and achieve different benefits.

“It’s quite difficult to quantify forestry cover gains,” she said, adding that planting trees outside of forests also helped support jobs and livelihoods for instance.

For Schulte, the key issues remains “the incentives to get more economic benefits out of forests because there is still a perception that you need to cut down trees to make a profit”.

There were some pockets of progress, including Indonesia where primary forest loss in 2018 dropped to its lowest rate since 2003. El Salvador, Ethiopia and Mexico are also identified as having made strides to plant trees.

In July, Ethiopia claimed to have broken a world record by planting 350 million trees in a day.

Justin Adams, executive director at the Tropical Forest Alliance, said three key lessons had been learned: the importance of increased transparency by using ever-improving satellite imagery and data, a better understanding of the role of different actors in the supply chains and the collective need for action.

“The last decade has been characterised by a lot of individual actions from governments, NGOs and the private sector,” he said. “Looking forward, we desperately need to unlock the potential for coordination.”