When UN chief António Guterres posed knee-deep in a Pacific island lagoon for a Time magazine photographer, he wanted the world to see his determination to tackle the climate crisis.

But the cover shot might also have stood for the rising tide of nationalism that threatens the very mission Guterres has made the UN’s defining challenge.

The multilateral world order that spawned the Paris Agreement four years ago is being tested by powerful forces.

On Friday, Russian president Vladimir Putin declared that liberalism – the value system on which the UN is based – was “obsolete” and hailed the growth of national populist movements in the US and Europe.

Putin’s comments to the Financial Times came hours before a G20 meeting in Japan where leaders were set to clash over the very basics of climate action.

In the lead up to the summit in Osaka, the Japanese hosts watered down a draft statement on climate action in a bid to keep the US on side as the two countries negotiate a thorny trade deal. 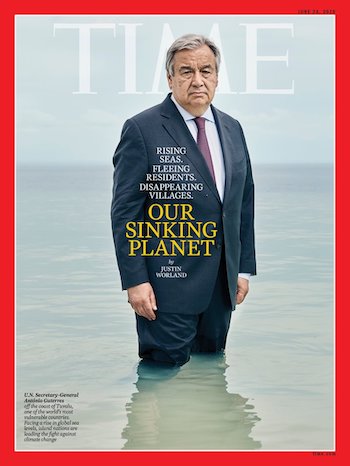 Since the election of Donald Trump, the G20 has failed to reach consensus on climate change and has been forced to state the US intention to withdraw from the Paris Agreement it helped design – French president Macron said this week he would walk away rather than sign a weak climate statement.

The G20 summit, attended by Guterres, marked the end of a fortnight of high-level meetings in which momentum for climate action was waylaid by nationalist leaders and interests.

Climate talks concluded on Thursday in Bonn with a milestone report on the science of 1.5C of warming being excluded from formal negotiations after obstruction from Saudi Arabia, Iran and other large oil and gas producing countries. At the same meeting, Brazil demanded a loophole in carbon trading rules that diplomats said would “kill” the Paris deal. President Jair Bolsonaro has said the accord is part of a UN conspiracy to steal sovereignty of the Amazon.

Guterres has taken it upon himself to swim against this current, positioning himself on the side of the most vulnerable countries and youth on the streets in relaying demands to the world’s most powerful leaders to take “immediate climate action”.

During his May trip to the eroding atolls of the Pacific, Guterres’ message to governments was unusually prescriptive for a UN chief: tax carbon, stop subsidising fossil fuels and stop building new coal plants.

Doubling down on need for new impetus, Guterres has organised a summit in New York this September to galvanise political leadership.

The meeting has become the centrepiece of this year’s climate agenda and will test the strength of the UN and the ideals it represents.

“This is not a comfortable moment for multilateralism,” said Rachel Kyte, Guterres’ special representative on access to sustainable energy.

“It’s a question of whether we [the international community] can rouse ourselves [to come together] and whether we have a forum to do that. The secretary general thinks the UN is that forum,” she added.

Kyte said migration and climate change had become the two key tests for the UN system to demonstrate its value more than 70 years after its creation.

“I have never seen him so focused on this,” she added. 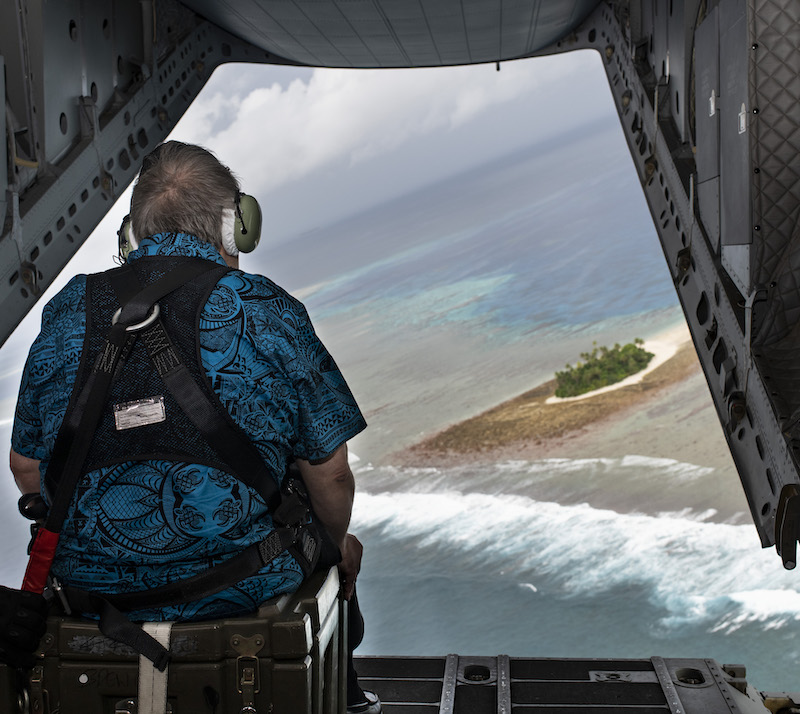 UN secretary general António Guterres in Tuvalu in May, 2019

Luis Alfonso de Alba, the UN special envoy for the climate summit, told Climate Home News the secretary general’s efforts on the issue “could not have been more timely”.

He said Guterres had envisaged “quite a different meeting” for the September summit and one that will focus on “action”.

“The basis of the Paris Agreement is that countries make voluntary commitments. That is a useful approach because it means we don’t need a consensus to move forward,” he said. This means the UN can lean on individual countries and encourage them to do more at home. De Alba said the UN was engaging with both leaders and laggards.

Preparations have run deep ahead of the September summit. A source told Climate Home News Guterres is in the process of writing or speaking personally to every head of state about the need for more ambitious carbon-cutting measures.

At the G20 on Friday, Guterres met with Chinese president Xi Jinping. According to Chinese state media, Xi told him he supported the secretary general’s efforts to promote international cooperation on climate change and insisted China will continue to uphold multilateralism and support the UN’s role in international affairs.

From Japan, Guterres will fly to Abu Dhabi to meet diplomats, local authority representatives, business leaders and civil society members this weekend to finalise some of the ground work for the summit.

At the meeting this weekend countries are due to present concrete proposals for cutting emissions, building resilience and collaborating across borders to take to the summit in New York. At the end of the meeting, a list of the most meaningful proposals with the capacity to be scaled-up will be compiled and enhanced throughout the summer. From that list, only the very best initiatives will be showcased at the September summit in New York.

This has the potential to expose countries unwilling or unable to organise their politics in time. The secretary general’s break with the UN’s traditional non-interventionist style has not pleased everyone. Some countries have expressed “frustrations” at Guterres’ demands on coal and fossil fuel subsidies, according to one diplomat involved in the running of his summit.

Guterres’ call for ambition has resonated with more than 100, mostly small, developing countries, which have reportedly expressed their intention to enhance their national contribution under the Paris Agreement. David Waskow, director of the World Resources Institute’s international climate initiative, said the format put the world’s major emitters under pressure to follow suit.

“They can’t take a pass with showing-up without ambitious action,” he said. “Small and medium-size countries have showed their willingness to move in the right direction. The critical test is going to be whether this can translate into the major players taking similar steps.”

A source inside the European Commission confirmed the bloc was still trying to fill the climate leadership space left vacant by the US, despite at this stage having no new climate commitments to bring to the UN summit.

A spokesperson for the secretary general said Guterres had been “disappointed by the lack of consensus” inside the EU.

A European diplomat told CHN negotiators had worked hard to reach consensus on carbon neutrality, not least because of the upcoming UN summit. Guterres’ “focus on ambition is maintaining momentum,” he said.

Meanwhile, the UN machine is pressing ahead. With global emissions still rising, Kyte said “we are poised on a knife edge, we don’t have time and every day that goes by is counted. The secretary general’s personal agency is to try to make sure we fall off this knife edge in the right direction.”

All photos unless otherwise noted from UN Photo. We’ve changed our rules on republication. Please read them here