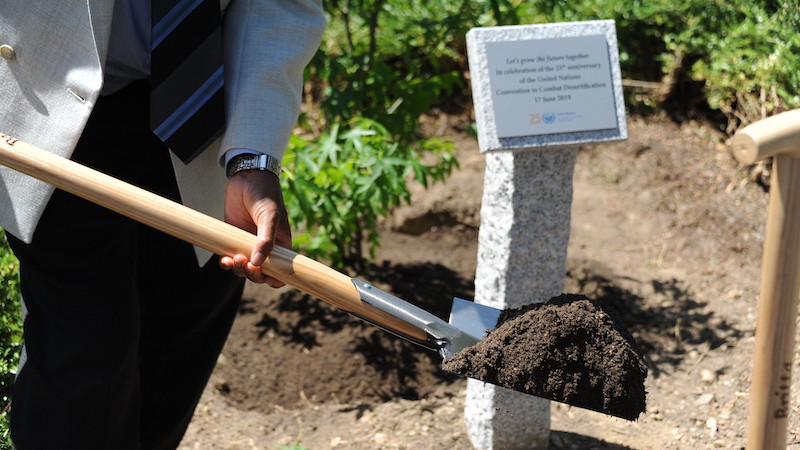 Climate science was buried at a meeting in Bonn. Meanwhile diplomats planted trees to symbolise their intention to combat desertification (Photo: UNFCCC)

A major report on 1.5C has been excluded from formal UN climate negotiations, after Saudi Arabia tried to discredit its scientific underpinnings.

Discussions came to a deadlock at the talks in Bonn after a small group of countries refused to engage in substantive discussions over how the report’s findings could be used to inform policies on increasing the pace and scale of decarbonisation.

The report by the Intergovernmental Panel on Climate Change (IPCC) lays out the differences between 1.5C and 2C of warming – a matter of survival for many vulnerable countries including small island states which pushed for the findings to lead to more ambitious carbon-cutting policies.

At the closing plenary, which took place amid soaring summer temperatures in the former west German capital, a five-paragraph watered-down agreement put an end to formal discussions on the report.

The agreed text expressed “appreciation and gratitude” to the scientific community for the report, which it said “reflects the best available science” and notes “the views expressed on how to strengthen scientific knowledge on global warming of 1.5C”.

It offers no way forward for the report to be considered further in formal negotiations.

In the final meeting of the talks, diplomats came together to express their disappointment. Franz Perrez, lead negotiator for Switzerland, wore a t-shirt with the message “science is not negotiable” and urged countries to use the report to inform their policies and “make the right decisions”.

A diplomat from Costa Rica said the IPCC report on 1.5C represented “a great triumph of science” and that “the quality of the work and the robustness of the conclusions are a tremendous achievement”.

“We recognise that many messages of the special report are difficult to accept,” she said, adding: “On climate change, listening to the science is not a choice but a duty. If we are asking the world to change, we also, as representatives, need to be willing to change.”

The meeting’s chair Paul Watkinson said science remained “at the heart” of UN Climate Change’s science stream and that it is “essential for all our collective and individual activities”.

Carlos Fuller, lead negotiator for the alliance of small island states (Aosis), told Climate Home News he was disappointed there would be no other formal opportunities for countries to delve into the science.

“When anyone is trying to discredit the science it is worrying, especially in the middle of a heatwave. We are the ones suffering if others reject the science,” he said.

Fuller said the final version of the text “encouraged everyone to use the [report’s findings]” but prevented the science from being debated.

Following pressure from a group of large oil and gas producers led by Saudi Arabia, a previous version of the text aimed to cast doubt on the report’s scientific grounding. It stressed the “risks and uncertainties” of the report’s methodology and raised concerns that “the scientific knowledge gap” would “hamper the ability to inform decision making at national, regional and international levels.”

Gebru Jember Endalew of Ethiopia, negotiator for the group of least developed countries, told Climate Home News this previous version of the text was “unacceptable” because it “questioned and revisited the science”.

“We can’t negotiate science,” he said. “This is not our mandate.”

Endalew said that although excluding the report from formal negotiations was “a mistake” it was a better outcome to “go without anything rather than having a shopping list of issues”.

Instead, he called on Chile, which is taking on the talks’ presidency, to organise events so that discussions can continue informally.

The report by the Intergovernmental Panel on Climate Change (IPCC) was commissioned by the UN on behalf of all countries, including those now objecting to its methodology.

Saudi Arabia, the US, Kuwait and Russia also refused to endorse the report’s findings at the last round of talks in Katowice, Poland, last year, despite support from almost the entire community of nations.

Alden Meyer, policy director at the Union of Concerned Scientists, described the agreed text as “very weak” and added little more than what had already been agreed.

“It shows a small group of large oil and gas producing countries have deep concerns about the implications of the report for their future revenue and are coordinating a strategy to try and block these implications to be more widely understood.

THREAD on why Saudi Arabia is so afraid of the @IPCC_CH's 1.5C report https://t.co/VX4RuRxz9W

“But no matter how hard they try, Saudi Arabia can’t put the message back into the bottle, the report is out there,” he said.

In an op-ed in the Financial Times, ambassador Lois Young, of Belize and the chair of Aosis, said five years after all countries had agreed to the Paris Agreement, a few countries wished to “quietly use procedural measures to rip it up away from the public gaze” – a strategy she described as “a rejection of multilateralism”.

“The move essentially declares that small islands and low-lying coastal developing states like my home, Belize, are disposable global zones to be sacrificed amid unprecedented climate change,” she wrote. “This is a crisis that affects our security and we call on those blocking at the UN to step aside.”