A landmark conference hosted by Antonio Guterres in September aims to jolt flagging international action on climate change, in line with the latest science 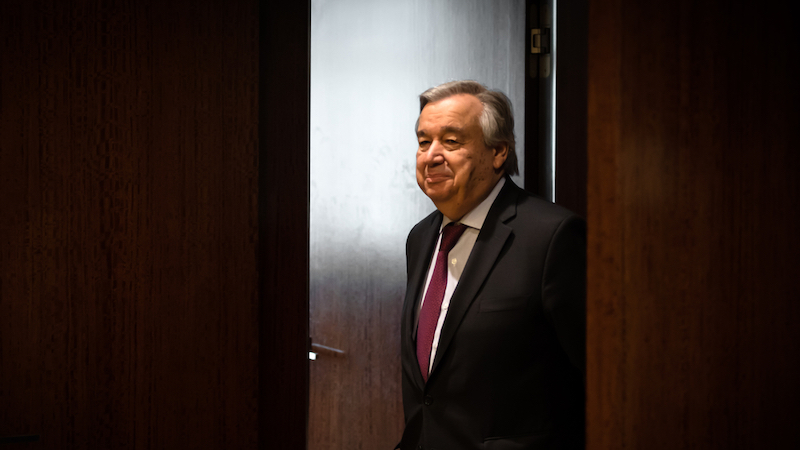 The UN secretary general is calling on world leaders to bring plans, not speeches to a climate summit he is hosting in September.

Representatives of Antonio Guterres wrote to heads of government last week, urging them to “demonstrate a leap in collective national political ambition and massive low-emission movements in the real economy”.

Climate Home News understands organisers do not intend to give politicians the UN podium for speeches, in a departure from the typical format of such events.

“This summit will be action-oriented,” the note, which was shared with CHN, said. “The deliverables and initiatives that will be showcased need to be implementable, scalable and replicable and have the potential to get us in line with the commitments of the Paris Agreement.”

“I am calling on all leaders to come to New York in September with concrete, realistic plans to enhance their nationally determined contributions by 2020,” the UN chief wrote in an article for the Guardian this month.

Countries are due to update their current pledges to the Paris Agreement, known as nationally determined contributions (NDCs), by the end of next year.

At the summit, governments have been asked to either bring those plans forward early, or at a minimum show that they will be ready for 2020. They must explain how those plans, which mostly focus on the road to 2030, fit not only with Paris but also the latest science.

That means cutting global greenhouse gas emissions 45% by 2030 and heading for net-zero emissions by 2050, the letter said, citing last year’s blockbuster report from the Intergovernmental Panel on Climate Change (IPCC).

The summit seeks to close a huge gap between the goals of the Paris Agreement – to limit warming to 1.5C or below 2C – and the pledges countries have so far made to meet them. Current national commitments are projected to collectively limit warming to 3C. This would lead to global economic, environmental and social damage, according to climate scientists. Worse, most nations are off the pace to meet even these inadequate targets.

The note is the clearest indication yet of the hardline approach Guterres will take, after a speech last year indicating he would throw himself and “the entire United Nations” into the fight against climate change.

On a practical level, countries will be encouraged to form coalitions focused on specific aspects of the climate puzzle. For example, they may collaborate on the best ways to use carbon pricing, green heavy industry or develop “nature-based solutions” like forest growth.

With an eye to the growing global school strike movement, there is to be a special track for mobilisation and youth, overseen by the Marshall Islands and Ireland.

Pairs or trios of countries have been invited to oversee the different tracks and they will be supported by specific UN agencies. Laid out in detail in the note are criteria that will be used to assess proposals from countries at a preparatory meeting in Abu Dhabi in late June. If they do not pass muster, the plans will not be presented at the summit.

CHN understands the UN organisers view governments of G20 countries, which emit roughly three quarters of global greenhouse gases, as the major targets for the summit.

So far, only the Marshall Islands has submitted an updated NDC. “If we can do it so can everyone else and so they should by UN secretary general’s summit,” a foreign affairs adviser to the tiny Pacific country told CHN.

Developing countries will not be “inspired” by the summit’s limited focus on climate finance, said Tosi Mpanu-Mpanu, an ambassador and lead climate negotiator for the Democratic Republic of Congo. Many poorer countries have made meeting their current national pledges contingent on the delivery of a promise of $100bn per year from the richest countries in the world.

Despite a track on the $100bn target, the goals of the summit don’t represent “money in the bank”, Mpanu-Mpanu said. “If I don’t see the money, how do you want me to scale up my NDC?”

UN diplomats, led by Guterres’ special envoy Luis Alfonso de Alba, are already criss-crossing the globe to drum up support for the summit. The secretary general himself is set to raise the subject in his regular phone calls with world leaders.

De Alba’s deputy Anne-Sophie Cerisola was in Beijing on Monday. China, the world’s largest polluter, is also in a strong position to update its NDC, an influential government think tank said last year.

In the EU last week, a leaders’ discussion of net-zero emissions was reportedly forced off the table by Germany. Neither the European Commission nor German environment ministry responded to questions regarding how this will affect the bloc’s alignment with the summit’s objective.

The document is notable for its use of the IPCC’s 2018 report on the impacts of 1.5C warming as its benchmark, not the Paris Agreement, which hedges its targets between 1.5C and 2C. The shift is a clear signal that the UN secretary general views the upper limit 2C agreed in Paris in 2015 as unacceptably risky.

The summit will take place on 23 September at the UN headquarters in New York.