The protest group wants a citizens’ assembly in the UK, following an Irish model that led to new political settlements on previously divisive issues 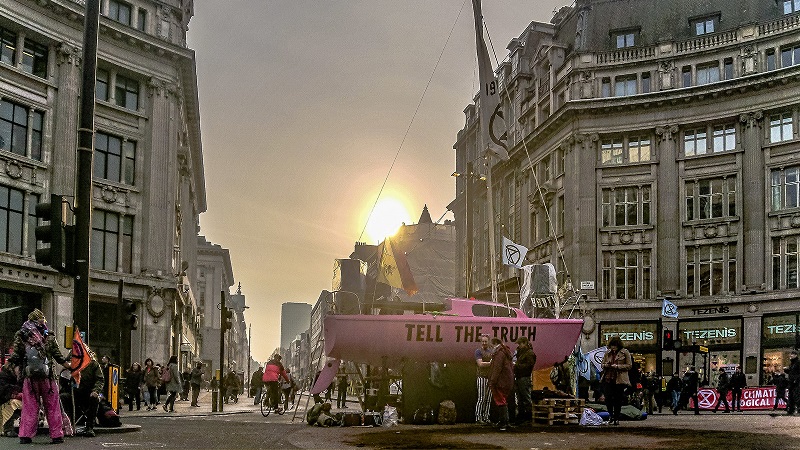 Climate activists occupying parts of central London are calling for a citizens’ assembly to steer the course of UK climate policy.

Extinction Rebellion has grabbed front pages by disrupting traffic at five busy intersections since Monday, to demand action on the “climate and ecological emergency”. The protests were still going strong on Thursday, undeterred by more than 400 arrests.

These actions were not immediately popular, with a YouGov poll finding 52% of people opposed to the tactics, against 36% in support. But the movement has a plan to build consensus for radical emissions cuts, inspired by a recent democratic experiment in Ireland.

“I think everyone agrees that our democracy is broken. The citizens’ assembly idea is a radical way to try and revive our democracy,” said Rupert Read, a spokesperson for Extinction Rebellion and philosopher at the University of East Anglia.

“People were very sceptical” about the Irish model, he told Climate Home News, “but it did work… The Extinction Rebellion idea is to try and use a citizens’ assembly of that kind as a way to to decide how to implement our goal of getting to net zero emissions by 2025.”

In Ireland, the government commissioned a citizens’ assembly to make recommendations on climate policy, among a range of issues. It led to a referendum that overturned a constitutional ban on abortion, representing a huge cultural shift for the Catholic-majority country.

Similarly on climate change the 99 citizens, drawn from a cross-section of society, produced a more ambitious consensus than many expected.

“Politicians were working on the assumption that people are resistant to change, that they can’t get past their narrow self-interest, but the citizens’ assembly proved that was incorrect,” said Sadhbh O’Neill, a doctoral researcher who advised Ireland’s parliamentary committee on the process.

After two weekend sessions spent quizzing experts on various aspects of the climate problem, the assembly produced 13 recommendations. These included a higher carbon tax covering several sectors – even farming, to the chagrin of the influential cattle lobby.

Ireland’s cross-party parliamentary committee on climate action endorsed most of those proposals last month, bringing them a step closer to fruition. It still needs government approval, but climate advocates are optimistic.

Across the Irish Sea, Brexit is testing the limits of democratic institutions. The British public voted to leave the EU, but their elected representatives cannot agree on the best way to do so, resulting in deadlock.

Frances Foley, project director at Citizens’ Convention on UK Democracy, said deliberative approaches can help to avoid or overcome that kind of stalemate.

“What is good about citizens’ conventions is they actually encourage people to slow down their thinking,” she said. “It is very good for thinking about future-oriented decisions and not just immediate responses to things.”

These exercises take time. Ireland’s assembly first met in October 2016 and its outcomes are still rippling through the traditional decision-making bodies. “[The deliberative approach] gives you quality output; it doesn’t necessarily give you speed,” said Foley.

That may seem at odds with the urgency of Extinction Rebellion’s demand to completely decarbonise the economy in six years – faster than any mainstream modelling scenario. But Read expressed confidence the process could be organised within 6-12 months.

Climate change is the kind of problem that merits deeper public engagement, Foley argued. “It is really the hardest collective decision-making problem we have ever had to face.”