Breaking the law has become more important than making the law, said Farhana Yamin, who charged through a police cordon outside the oil company on Tuesday 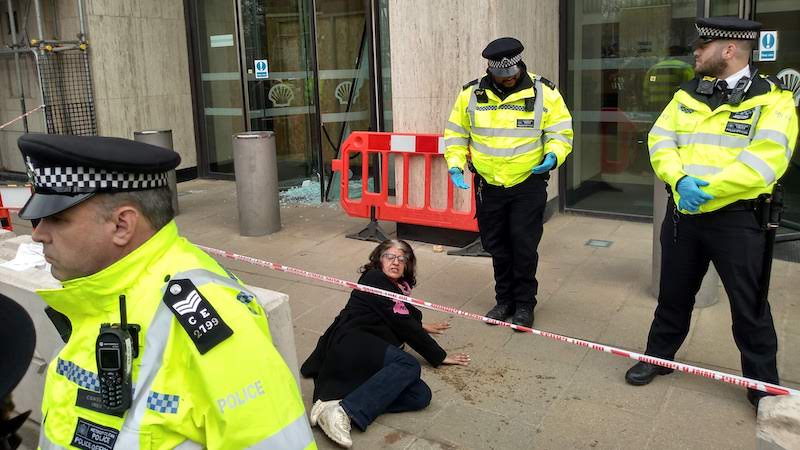 After decades working inside the law, international climate lawyer and diplomat Farhana Yamin charged through a police line, dived under the arms of an officer and superglued her hands to the pavement outside the London headquarters of oil company Shell.

Her action, which took place on Tuesday, was part of a rolling set of protests taking place across London and the world under the Extinction Rebellion banner. She later joined a growing tally of activists to be arrested.

Yamin is a legal expert who has advised various developing countries in climate negotiations and is an associate fellow at Chatham House. On Tuesday, she told Climate Home News that the Paris Agreement, which she helped negotiate in 2015, was “not delivering”.

“I thought that was my story,” she said. “I thought that the law and science and speaking truth to power worked. That we would be able to act with kindness and in time and on the basis of the precautionary principle and all these lovely ideas that we enshrined in law in the early 80s and 90s.

“And we haven’t done that and that’s because these guys [Shell] knew and have stopped it. It’s not some random delay, this delay has been planned in the system, it’s been financed, it’s been lobbied for. So that’s why today, I feel totally comfortable and I wish I’d done it sooner, had woken up to the power dynamics and not been so naive.”

Police had cordoned off access to Shell’s London office after two other protesters had climbed onto the entrance on Monday, spray painting slogans above the door.

VIDEO: Leading climate lawyer Farhana Yamin dives through a police cordon to glues herself to the pavement of Shell's London HQ as part of #ExtinctionRebellion : https://t.co/99RWD9gvfU pic.twitter.com/wUhy4VgrZb

As the pair surrendered themselves to police on Tuesday, Yamin used the distraction to duck through a line of officers and throw herself to the ground. Yamin’s husband Michael Yule, a former criminal defence solicitor turned teacher, and son Rafi, who has been involved in the school strikes movement, watched as police tried first to prize her from the pavement before she yelled: “I’m glued to the floor, I’m glued to the floor.”

She was later removed from the pavement and led away by police in handcuffs. Yamin said she was ready to join in police custody dozens of protesters who were being simultaneously arrested on Waterloo Bridge. Overnight, more than 120 people were detained as police attempted to break a blockade on the bridge that began on Monday morning.

By Tuesday evening 209 people had been arrested, according to the Metropolitan Police, and 500,000 commuters had been impacted by the closure of bus routes.

And makes a statement from the floor: pic.twitter.com/gxTNwlvXOz

According to Extinction Rebellion, there will be protests and actions in 80 cities across 33 countries in the coming days. In London, the group plans to escalate its actions beyond the current traffic chaos to include the city’s underground on Wednesday.

“Economic disruption is key in forcing the government to come to the table and negotiate our demands,” said the group in a statement. “We sincerely apologise to all those who may suffer as a consequence of this disruption. In any other circumstances we would never dream of disrupting the tube but this is an emergency.”

Mayor of London Sadiq Khan issued a statement that said he was “extremely concerned”.

“It is absolutely crucial to get more people using public transport, as well as walking and cycling, if we are to tackle this climate emergency – and millions of Londoners depend on the underground network to get about their daily lives in our city. Targeting public transport in this way would only damage the cause of all of us who want to tackle climate change, as well as risking Londoners’ safety, and I’d implore anyone considering doing so to think again,” he said.

The movement is calling on the UK government to “tell the truth” about the extent of the crisis, slash greenhouse gas emissions to net zero by 2025 and establish a citizens’ assembly to oversee climate policy.

Yamin said Extinction Rebellion in London aimed to establish permanent disruptive vigils around the city, in the same manner as anti-apartheid protesters picketed South Africa’s embassy in the late 1980s.

“My legal journey has been very much about making new laws,” said the lawyer, who was also a chief architect of Europe’s emissions trading legislation. “Making new laws is really important. But breaking the law has become more important because of the gravity and the nature of the political crisis that is stopping these laws being good enough in the first place.”

Yamin had come prepared with a copy of the book Doughnut Economics: Seven Ways to Think Like a 21st-Century Economist to read in the cells.