Sweeping in scope, an agenda to transform the US into a green leader has been launched in Washington DC, here are the key points 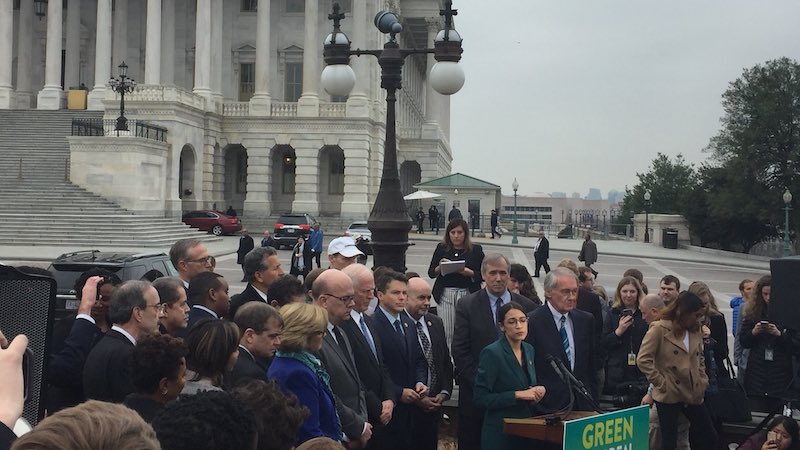 On Thursday, congresswoman Alexandria Ocasio-Cortez and senator Ed Markey presented an outline of a sweeping federal programme aiming at decarbonising the US economy.

The text makes for the most earnest attempt yet to define a concept that has been backed by many a Democratic presidential candidate, often with little detail.

The agenda would touch every aspect of the US economy and calls for carbon emissions and inequality to be tackled as one.

“Today is the day we truly embark on a comprehensive agenda of economic, social and racial justice in the United States of America,” Ocasio-Cortez said in a press conference launching the resolution.

There are many legislative hurdles for the deal to leap if it is ever to become US policy – not least the Republican-controlled senate and White House.

The plan was the beginning of a phase of “political education”, said Markey, that would eventually lead to the adoption of the package. The pair said the document had attracted 60 Democrats as cosponsors, from across the party. 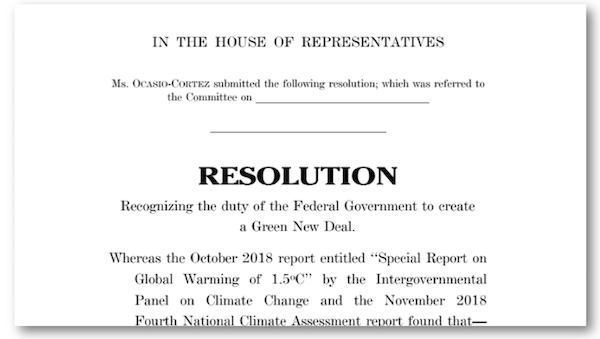 A historically ambitious agenda: Borrowing its name after Franklin Roosevelt’s depression-era New Deal, the resolution commits the US to axe greenhouse gas emissions through a series of Green New Deal goals to be achieved within ten years, and reach net zero emissions by 2050. This is a far more radical pledge than the current US target, which seeks to slash emissions by 26–28% below 2005 levels in 2025.

A punch back at climate denial: Swept under the carpet by the White House, the landmark UN report on 1.5C of warming and the fourth national assessment climate report are hoisted at the very forefront of the resolution.

This marks a 180 degree turn away from the current administration, which has consistently sought to sow doubt on man-made climate change. In November, Donald Trump told reporters that he didn’t believe his government’s climate report, while the US sided with Saudi Arabia, Russia and Kuwait in October in diminishing the role of the 1.5C report at the UN climate summit in December.

The “just transition” enters Congress: Thought out by trade-unions, the just transition aims to decarbonise the economy in a way that softens the impact on fossil-fuel workers. The legislation explicitly refers to it by aiming to “achieve net-zero greenhouse gas emissions through a fair and just transition for all communities and workers”.

“We are not going to transition to renewable energies without also transitioning front line communities and coal communities into economic prosperity,” said Ocasio-Cortez.

Calling for an energy revolution: Within 10 years, the deal calls for 100% of power demand in the US to be met “through clean, renewable, and zero-emission energy sources”. To make this happen, the government would work to provide “energy-efficient, distributed, and ‘‘smart’’ power grids” and “ensure affordable access to electricity.

The nuclear option: An original fact sheet that was released by Ocasio-Cortez’ office regarding the resolution said there was no place for nuclear in the 100% renewable energy target. But asked about that in the press conference, Markey said the resolution was “silent” on any particular carbon-free energy technology. Nuclear currently supplies 20% of US electricity.

Large-scale investments in infrastructure. The resolution calls for a massive overhaul of infrastructure and industry. Overhauling transportation systems in the United States to eliminate pollution and greenhouse gas emissions as much as is “technologically feasible”.

Building climate policy from the bottom-up: Written after France’s gilets jaune movement brought tens of thousands to the streets to protest a tax rise on fuel, the legislation seeks to involve citizens into the development of the plans that will implement the Green New Deal. It called for “transparent and inclusive consultation, collaboration, and partnership with front line and vulnerable communities, labour unions, worker cooperatives, civil society groups, academia, and businesses”.

* Note: this article has been amended to reflect the fact that the GND does not set a 2030 emissions target.