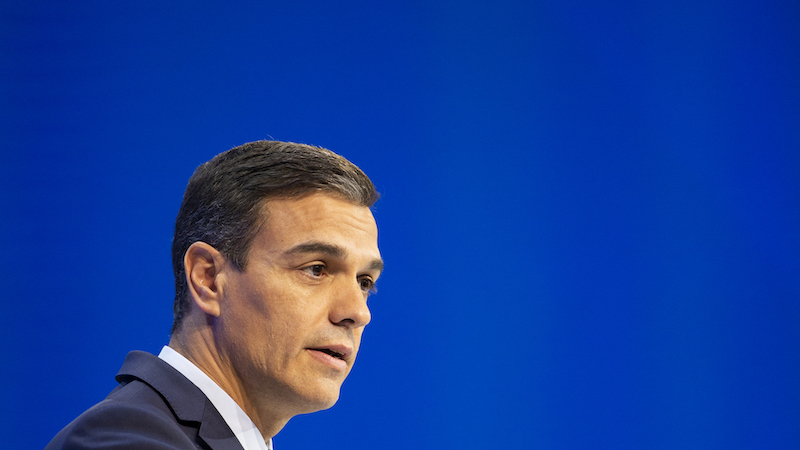 The era of neoliberalism and deregulation is over, Spain’s prime minister said on Wednesday, clearing the way for a progressive, green agenda.

Speaking to the World Economic Forum meeting in the ski-resort of Davos, Switzerland, Pedro Sanchez said that in the face of “global and cross-cutting” climate change, “every government” must embrace “ecological responses”.

“The ecological transition, which has started to be known in many forums as the Green New Deal, should not instil fear,” Sanchez said, adding that energy reform would create, rather than destroy jobs.

He said Spain, Europe’s fifth largest economy, was “in a privileged position to lead this change. We know what to do, and we are going to do it”.

The Green New Deal is a term recently brought to the fore of US politics by congresswoman Alexandria Ocasio-Cortez. In broad terms, it calls for a huge economic stimulus targeted at the environmental and climate crisis and social inequality.

In Spain, Sanchez’ government has proposed a sweeping climate law he said would mobilise €200bn in green investment over the next decade.

Progressive politics in general was on the ascendant Sanchez said, bringing with it “political concepts that some label as revolutionary, such as redistribution of wealth and universal basic income. And let me tell you something, they are not revolutionary, they are necessary”.

He added: “I have no doubt that they will be the foundation of the new social pact, of the new era.”

“What has come to an end is the neoliberal model that led us to the great recession. A model that mixes up deregulation and liberalisation and which offers us an increasingly hostile world to those of us who are not powerful,” he said.

Sanchez’s social democratic government, which scraped into power in June with razer-thin majority, has won praise from observers for enacting a series of bold measures to fight climate change. Under environment minister Teresa Ribera, it has buoyed a previously embattled renewables sector by scrapping an emblematic levy on solar energy and committing to install 6,000-7,000MW of renewable power every year until 2030. It has also imposed itself as a model for a socially just transition towards clean energy, having overseen the closure of coal mines in 2018 through a deal with mining unions.

The government now hopes to win support in the Cortes Generales for a legislative package that would mandate 100% renewable power by 2050, ban fossil fuel subsidies, divest from fossil fuels and ban diesel and petrol cars.