It has a big name and little detail, but the Green New Deal is has already won the backing of most Democratic candidates 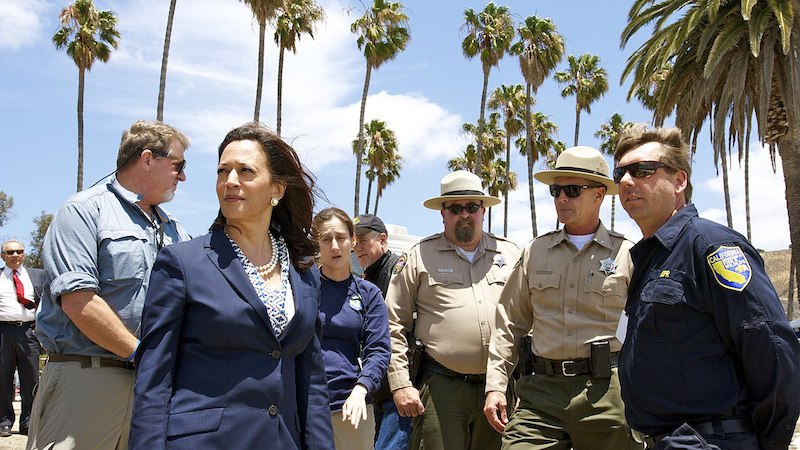 Kamala Harris on a 2015 tour of oil spill clean up efforts at the Refugio State Beach. She was California attorney general at the time (Photo: Cal AG office)

Climate politics has come roaring back to life in the US under the banner of the Green New Deal.

So much so that almost all Democratic presidential candidates have already lent their backing to the idea. What exactly each means however, varies widely.

What started as little more than a slogan for a huge public investment in green infrastructure and jobs is set to be fleshed out this week. Axios reports New York representative Alexandra Ocasio-Cortez and Massachusetts senator Ed Markey will unveil a new bill outlining their proposal for a Green New Deal on Wednesday or Thursday.

A draft of the bill currently in circulation commits the US to source 100% of national power from renewable sources by 2030 as well as to build a national, energy-efficient, ‘smart grid’. Also on the table are upgrades of “every residential and industrial building [with] state-of-the-art energy efficiency”, along with measures to “eliminate greenhouse gas emissions from the manufacturing, agricultural and other industries, including by investing in local-scale agriculture in communities across the country”. Finally, it would invest in green technology research and development and provide training for jobs in the new green economy.

That and growing concerns over climate change have placed the question of a Green New Deal centre stage of the democratic primaries for the 2020 presidential election. Research by Yale shows a large majority of Americans now believe that climate change is happening and that 7 out 10 Americans are at least “somewhat worried about climate change”. Meanwhile, a poll in December found that policy measures similar to a Green New Deal enjoyed strong bipartisan support when they are not associated to any political party.

Declared candidates have flocked to back the concept. But what their version of the deal would look like is anyone’s guess. Environmentalists and progressives have begun to lose patience over woolly assurances.

“Having presidential candidates say they are supportive of the concept of doing something like the Green New Deal is amazing, but it’s not sufficient,” Saikat Chakrabarti, head of staff to Alexandria Ocasio-Cortez, told the Washington Examiner.

Climate Home News has compiled a list of statements on the Green New Deal and climate change per declared candidate. They range from the bold and radical to the vaguely-worded.

The Californian senator came out with her most dramatic endorsement of climate action yet on 28 January. “I support a Green New Deal,” she told CNN on 28 January “Climate change is an existential threat to all of us, and we have got to deal with the reality of it.

The former attorney, who is one of the heavy-weights to compete in this race, also slammed “policy-makers who are in the pockets of big oil and big coal [and] don’t appreciate that we are looking at something that presents us with an existential threat. All children need to be able to breathe clean and drink clean water”.

Harris has not signed the No fossil fuel money pledge, a flagship agreement commits politicians “to adopt a policy to not knowingly accept any contributions over $200 from fossil fuel companies — companies whose primary business is the extraction, processing, distribution, or sale of oil, gas, or coal.”

The Massachusetts senator has carved herself a reputation as one of Trump’s most vocal critics, calling out the president’s deregulatory agenda at every turn.

In her early campaign, references to climate have been scarce. Her initial four and a half minute campaign video refers only once to the impacts of global warming, when she points at oil companies for “destroy[ing] the planet”. A senate aid reportedly described her as “a long time advocate of aggressively addressing climate change and shifting toward renewables and supports the idea of a Green New Deal to ambitiously tackle our climate crisis, economic inequality, and racial injustice.” 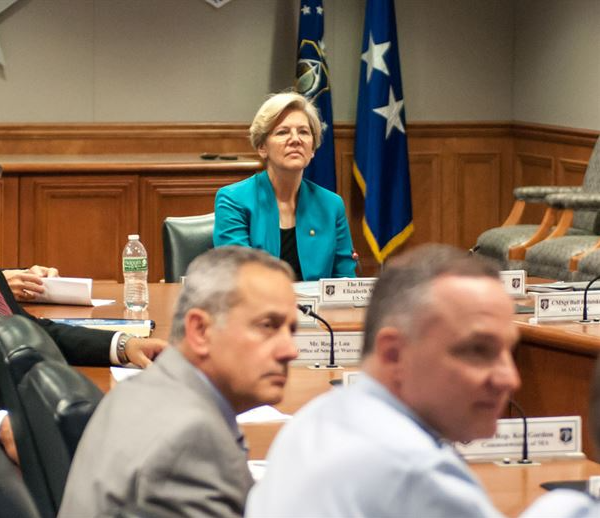 Senator Booker, who announced his candidacy on 1 February, also known in the US as the start of black history month, boasts a solid record of standing up for racial and gender equality. The former mayor of the largest city in New Jersey, Newark, is however more timid on climate.

Booker has jumped on to the Green New Deal train, without giving further details on its content, joining an Instagram hashtag thread with a photo of ice shelves and the comment: “We need to do everything we can to make sure this #tenyearchallenge is not the reality of our planet in 2029. If we want to pass on a sustainable healthy world to the next generation, we need to have started yesterday. Today’s not too late. #GreenNewDeal. We must have compelling, inspiring, igniting goals. Let’s get it started.”

His campaign video bypasses any references to global warming, he also gave an extensive podcast interview hours after having announced his presidential candidacy without mentioning climate change, instead settling for a call for “environmental justice”.

In 2017, he pushed a bill called the “Environmental Justice Act“, which forced federal agencies to tackle social inequalities linked to pollution and climate in their permitting decisions. Booker has also fought to limit emissions from the national postal service and the freight sector.

The straight-talking, formerly Trump-supporting, West Virginia state senator believes he can take back the American heartlands from the Republicans with his authenticity. On climate, he has played it both ways. Filmed by NBC in November, Ojeda said he was “very proud of the fact that [Trump’s policies had led] the coal industry [to] pick up. We got coal trains moving, they’re full of coal”.

But in January, the former paratrooper told the Globe Post “climate change does exist and we need to address it”. Oveja pledged to adopt a Green New Deal as soon as possible, rather than “waiting until, you know, 2035” and flood “places that are struggling already like Michigan and West Virginia and Kentucky, places across the Midwest” with green energy jobs.

Delaney backs a Green New Deal that would feature a carbon tax as its “centrepiece”.  Along with three other Democrats and three Republicans, he co-sponsored the first bipartisan carbon tax bill in a decade, the Energy Innovation and Carbon Dividend Act, in December. The legislation puts a price on carbon and redistributes its revenue to American citizens through a dividend. If adopted, authors argue that a single American would reap an average $500 per year.

The former Maryland congressman clinched the Climate Leadership Award from the Citizens’ Climate Lobby in 2017.

CHN found mention of the GND from one of the most marginal candidates in these primaries. But Yang does have an innovative portfolio, with a clear emphasis on tech solutions to the climate crisis.  If elected, Yang would “invest heavily in geo-engineering projects,” such as carbon capture or cloud-seeding technology, and create a new Global Geoengineering Institute to boot. While light on details, he has committed to invest in renewables with a view of moving “towards 100% clean energy”.

Yang has otherwise vowed to rejoin the Paris Climate Agreement, implement a carbon fee and dividend and scrap fossil fuel subsidies. At a legislative level he has committed to restore protections from the Environmental Protection Agency eroded under Trump. And he wants to shift climate action from Capitol Hill. “While the role of the federal government is important,” Yang writes, “much of the work will be done at the state, or even neighbourhood, level.”

The former housing and urban development secretary has said that he would use his first executive order to bring back the US into the Paris Agreement. Aside from that, the 44-year old has dropped few hints about climate policy.

Speaking on 12 January in his home town San Antonio, Castro told the crowd not let “anyone tell you that we have to choose between growing our economy and protecting our planet. We can fight climate change and create great jobs here in America,” In 2014, The Atlantic dubbed him “Obama’s climate denizen” for piloting programs to make housing infrastructure more climate-resilient.

Gabbard can arguably be considered as one of the most aggressive Democrats when it comes to climate policy. Introduced in January 2017, her bill Off Fuels for a Better Future Act has been cited as one of the pieces of legislation that could feature in a Green New Deal. The plan aims to end fossil fuel exports and subsidies and source 100% of the US’ electricity from renewable energy by 2035, making California’s already ambitious target to pass to 100% clean energy in 2045 look paltry. Fracking would be banned.

Tulsi Gabbard has been steadfast in rebutting calls to build the Keystone XL pipeline. She’s instead used her leadership platform to advocate for increasing America’s renewable energy supply. She’s also a strong champion for organic agriculture 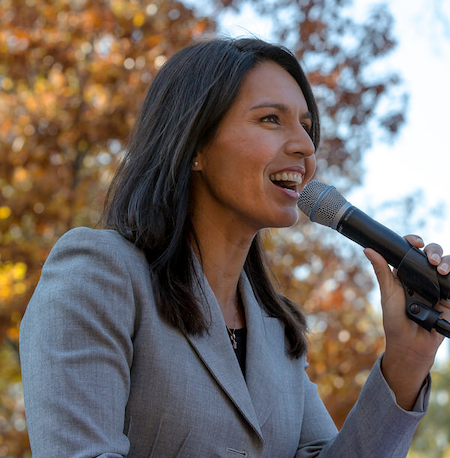 New York senator Kirsten Gillibrand is big on carbon pricing, having backed a cap-and-trade bill in Congress in 2009 and campaigned for the mechanism during her campaign of re-election as a senator. “If you really want to attack global climate change effectively, you should put a price on carbon,” she told Pod Save America on 22 January “because what you’re doing is you’re incentivising good behaviour,”

On the Green New Deal, she said “there’s not a lot of details yet behind [it]” but“the platform of it is really exciting”.

Along with Bernie Sanders and Warren, she proposed the Keep it in the Ground Act in 2017, which would ban new fossil fuel leases on public land and in federal waters. At the time campaign group 350.org said it set “a new bar for climate leadership”.

The relatively unknown mayor of South Bend, Indiana, only announced his candidacy on 23 January. Specifics of his 2020 climate agenda are still thin. However, the 37-year old has repeatedly claimed that his young age gave him an edge over other candidates in understanding climate change. “If you’re my age or younger, you’re going to be dealing with climate change for most of your adult life in specific, noticeable ways,” he told The Atlantic on 23 January. 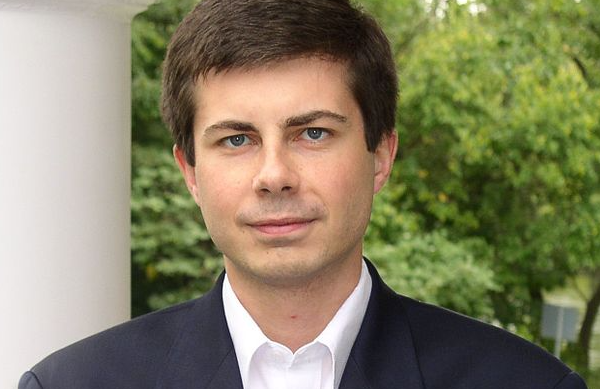 Read more on: US | World US