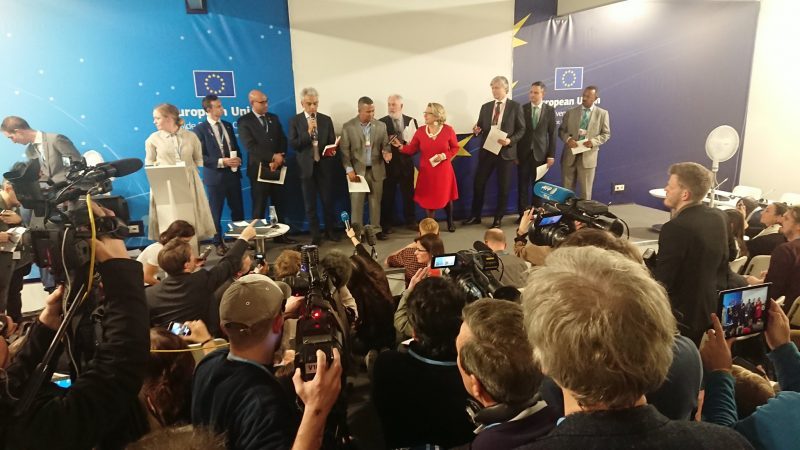 Media crowds around for a statement by the "high ambition coalition" at Cop24 climate talks in Katowice, Poland (Pic: mariluomi/twitter)

Powerful forces are colliding in Katowice.

Others vented their frustration. The UN chief flew back to Poland with a message that failure would be “immoral” and “suicidal”, Fiji’s prime minister said it would be “craven, irresponsible and selfish” and a coalition of countries born in the Paris talks in 2015 was resurrected, with a call to arms.

With new draft rules written by the Polish Cop24 presidency in hand by Wednesday afternoon, and many issues still to be resolved, countries and groups came out swinging for their demands.

For the four Basic emerging economies – Brazil, South Africa, India and China – it’s all about differentiating their responsibilities from those of rich countries, and firming up the latter’s commitments to provide financial aid.

“There’s a bit of concern that financial commitments, as agreed to in Paris, have not yet fully been met,” said South African tourism minister Tokozile Xasa. “It’s quite clear, the evidence shows, that not only do we need reliability in the available finance to support of the initiatives, but that the amount allocated is hopelessly inadequate.”

On the question of how the rulebook applies to countries, the group stressed that the Paris Agreement gives developing countries more leniency as they build up abilities to, for instance, track and report emissions. “There has to be some degree of flexible reassertion of the differentiated approach … and the allowance made for developing countries,” Xasa said.

EU climate action commissioner Miguel Arias Cañete countered that the Paris Agreement calls for a more flexible differentiation than the developed/developing line of the 1990s. “We fully respect what we agreed in Paris, but Paris also points out … that we have to have an enhanced transparency system with built-in flexibilities,” he said. Countries that need flexibility should get it, while their capabilities are built up, he added.

UK climate minister Claire Perry was still at home on Wednesday, to defend the prime minister from a no confidence vote. She was due to be in Katowice by lunchtime Thursday for an event on her pet Powering Past Coal Alliance, but with the political situation precarious, some uncertainty remains.

Meanwhile on Thursday and Friday, EU leaders meet in Brussels to talk about the “seriousness of the situation” in Britain, European Council president Donald Tusk announced.

Also on the agenda: climate change, along with migration, the EU’s single market and other issues. This will be the first opportunity for the EU’s 28 leaders to discuss the European Commission’s recent strategy on tackling climate change by 2050. The commission is urging countries to set a goal for slashing emissions to net-zero by then.

The Green Climate Fund has extended its search for a new executive director to 3 January. Climate Home News understands big hitters like Nigerian former finance minister Ngozi Okonjo-Iweala and UN desertification chief Monique Barbut have been encouraged to apply, but many potential candidates are deterred by the Songdo location.

Aside from Japan’s favourite, one person ready to serve is Javier Manzanares, the deputy who is acting executive director for the second time. In support of his candidacy, Manzanares cited to CHN the positive outcomes of the October board meeting – which he covered – compared to the fiasco in July, when predecessor Howard Bamsey abruptly quit. Is he blaming Bamsey for the collapse of the earlier meeting? “No,” he said, poker-faced.

Manzanares acknowledged complaints about the flagship fund’s hefty paperwork demands – “there is plenty of room for improvement” – but defended its record: 93 projects worth $4.6 billion approved in three years, of which $420 million has been disbursed.

It should still be the fund of choice for finance ministers in developing countries with riskier, “transformational” projects, he argued. The examples he reached for support solar rooftops in India and renewable energy in Egypt. Both cut emissions rather than building resilience to climate change, with the latter being the priority for the poorest countries.

On adaptation to climate change, Manzanares flagged a partnership with the World Meteorological Organization to strengthen the climate rationale for projects. “We want to go much deeper into the climate integrity of everything we do,” he told CHN.

A little-noticed detail of the Paris rulebook could allow airlines to greenwash their operation using discredited carbon offsets, warns a blog from the Environmental Defense Fund. Background here.

Cop must go on

Young Brazilians have set out to organise an alternative, youth-led Cop, after the country’s president-elect Jair Bolsonaro backed away from hosting the next UN climate summit. The group, which comprises young climate leaders and Engajamundo, is still waiting for the new venue of Cop25 to be confirmed to decide on a location. You can give them a thumbs up and chip into their crowdfunding campaign in the meantime here.