Call by António Guterres was joined by Fiji’s prime minister, who said not succeeding on climate change would be “craven, irresponsible and selfish” 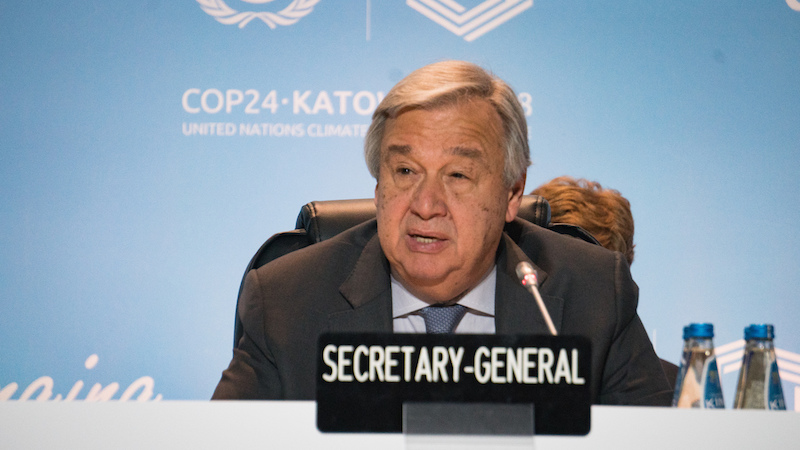 Governments face a choice between increasing their climate pledges or embarking on an “immoral” and “suicidal” path, UN secretary general António Guterres said on Wednesday.

At a UN climate summit in Poland, Guterres was joined by Fijian prime minister Frank Bainimarama in issuing a plea for countries to renew and upgrade their Paris Agreement promises within a year.

“To waste this opportunity would compromise our last best chance to stop runaway climate change. It would not only be immoral, it would be suicidal,” Guterres said. “This may sound like a dramatic appeal, but it is exactly this: a dramatic appeal.”

The remarks were some of the last to be made at the Talanoa Dialogue, a diplomatic procedure initiated by the Fijians in 2017 that aims to bridge divides in the polarised climate process through the sharing of stories.

In an effort to build urgency, the Fijian and Polish governments who presided over Cop23 and Cop24 UN climate summits released the Talanoa Call to Action, which asked governments to place climate change at the top of the political agenda and step up their policies immediately.

“Or enter history as the generation that blew it; that sacrificed the health of our world and ultimately betrayed humanity because we didn’t have the courage and foresight to go beyond our short-term individual concerns. Craven, irresponsible and selfish,” said Bainimarama.

Under the Paris Agreement, countries made pledges to reduce their greenhouse gas emissions. But the combination of these pledges fell far short of what will be necessary to stabilise the climate.

Because of this, there is a push for countries to regularly increase their pledges, with the first moment being targeted as next year at a summit Guterres is organising in New York in September.

Bainimarama appealed to all nations to arrive at the summit with plans for new pledges, joining Fiji and the Marshall Islands, which have already committed to raising their pledges in recent months.

Even if countries do up their pledges, the Paris Agreement will need rules that ensures countries stick to them. That is the main subject of the talks in Katowice, Poland, which wrap up on Friday.

On Wednesday, the Polish presidency released a new version of the rulebook. The proposal left several big and technical issues open for ministers to wrangle over in just a few days, negotiators said. The biggest sticking points included financial aid and the way rules are applied to rich and poor countries – with Brazil, China, India and South Africa calling for more differentiation.

But the extent to which the Talanoa Dialogue leads to a declaration that pushes for ambition is questionable too, a British source said. “Personally, I don’t feel like the mood is quite there yet.”

An anticipated call from a broad group of developed and developing countries – known as the high ambition coalition – was promising, but not central to the results, the source added. “It obviously sits alongside any decision and it’s not part of it… but maybe I’m being a bit too downbeat.”

“I challenge you to accelerate and finish the job,” Guterres told ministers and negotiators from around the world, many of whom sleep-deprived after one and a half weeks of talks.

On Tuesday night, the Polish presidency of the talks also announced a list of ministers who would work in pairs on the toughest issues at these talks. On Wednesday, another pair was added – Costa Rica and Sweden – to try and find agreement on a statement on ambition.

In an interview before that appointment was made, Costa Rica’s environment minister Carlos Manuel Rodriguez told Climate Home News that the central American nation had been “one of the few countries who have been systematically consistent in [raising] the bar of commitment”.

In a sign of concern from outside the UN process, a coalition of businesses, mayors, regional governments and investors released a joint statement calling on the meeting to make a “clear commitment” to begin processes that will lead to “new or updated” national climate pledges.