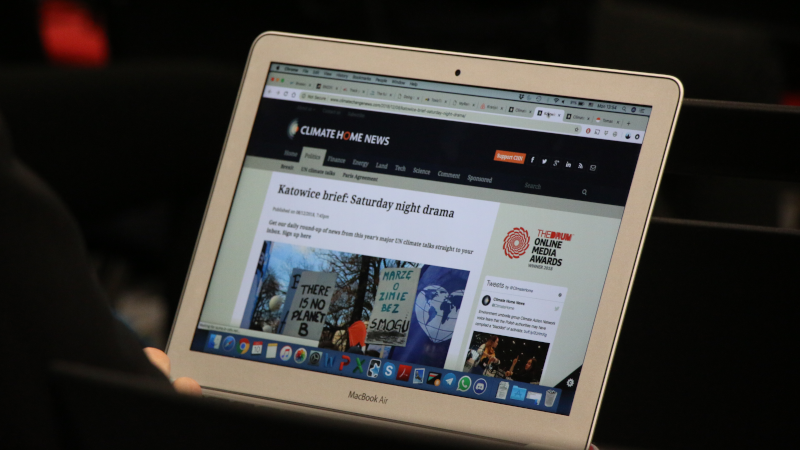 A delegate at Cop24 catches up on the news (Photo: Soila Apparicio)

“I’ve had four hours sleep in the last 72 hours,” said one negotiator as he walked into the UN climate plenary in Katowice, Poland on Tuesday evening.

After two extra days of negotiations, which saw some groups debating through the night, “a lot remains unresolved”, one of the co-chairs of the UN talks Jo Tyndall said.

“The current approach to negotiations is exhausted. Many texts are stuck. From now on we will move under the authority of the Polish presidency,” he said.

That means on Wednesday morning the Poles will produce their own outline for the rulebook of the Paris Agreement and intense diplomacy, led by pairs of ministers, will begin.

All Cop presidencies take on their own shape. In theory, it’s the job of the UN secretariat to draft negotiating text, with some guidance from the presidency. But if the UN is left to its own devices it will tend to find its way to a middle ground that fails to recognise the political realities of the process.

The relationship between the secretariat and the presidency has fluctuated over the years. In Paris, the French took control, providing their own language. But they were backed by the full weight of their government and diplomatic corps.

This presidency is, by many accounts, undergunned, understaffed and undermined by some other parts of the Polish government. But Kurtyka has some powerful backers working behind the scenes – including the French president of the 2015 Paris conference Laurent Fabius.

CopCast: Can Talanoa help the climate?

Michael Lazarus talks to Megan Darby about a climate meeting that tried to break down the formal boundaries with Pacific twist. Follow us on Soundcloud and all good podcast apps, and please share.

From the tone of their voices, they could have been sitting around a campfire. But the people assembled in Katowice, Poland, on Tuesday spoke in the harsh light of a UN plenary room. Ministers, academics and campaigners alike were sharing stories about climate change. Rather than put people to sleep, these stories aimed to wake the audience up.

Fiji’s prime minister Frank Bainimarama, who kicked off the Talanoa Dialogue as president of last year’s summit, urged them to heed the warnings contained in October’s blockbuster climate science report.

“If you think you’re safe in your environment, if you’re not vulnerable, you will be vulnerable if we do not follow what the scientists told us,” Bainimarama said.

UN chief Antonio Guterres is expected back at Cop24 on Wednesday to knock some heads together.

“He is coming back because he understands how important this is; he wants to do everything he can to make it absolutely clear what leadership looks like and what the expectation is,” said Rachel Kyte, UN special envoy for sustainable energy.

Last week the Portuguese diplomat made clear he wanted governments to announce more ambitious climate pledges before 2020. Can he inspire ministers to commit?

No credit for Kiwis

New Zealand will scrap its left over carbon credits from the Kyoto Protocol. The Sydney Morning Herald reported that the accounting trick will make it easier for the country to meet its Paris Agreement targets. Climate minister James Shaw said no nation should resort to using surplus credits. But Pacific neighbour Australia has repeatedly insisted the credits are a legitimate way to meet its Paris target.

Indigenous groups and other native communities will get a voice on efforts to limit climate change and adapt to its effects, under a platform agreed in Katowice after a tough few days of talks.

The biggest sticking point: China wanted to make clear that the platform won’t infringe on state sovereignty over “local communities”, which have yet to be defined. China doesn’t have official indigenous groups, but local communities, for example from Tibet or Taiwan, could seek to be recognised on the platform in the coming years.

China is already working to reduce its emissions and fund climate projects in poorer countries. But it remains up to the developed world to carry the weight, under the contentious principle known as common but differentiated responsibilities, or CBDR, Xie Zhenhua, the country’s special representative on climate affairs, told the Talanoa Dialogue.

“We expect Cop24 to complete the negotiations on the implementation of the Paris Agreement in order to concretise the CBDR rules in order to ensure mitigation, adaptation, science, technologies and capacities,” he said.

The US and EU oppose firm differentiation rules, arguing they should be more flexible to reflect the differences between the poorest and emerging economies.

Only 33% of the lead authors of the IPPC’s latest report on 1.5C are women, French palaeontologist and IPCC co-chair Valérie Masson-Delmotte lamented on Twitter. Male speakers are also known to vastly outnumber female speakers in UN talks – a phenomenon  known as “manels”, CHN reported in May.