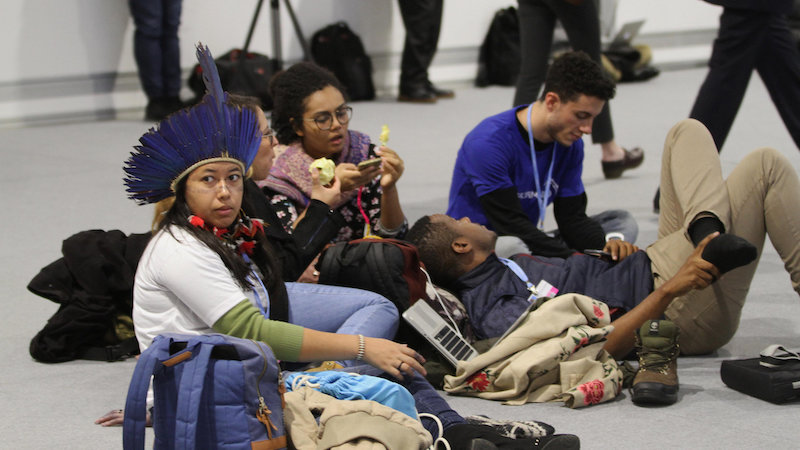 At the end of two weeks of talks in Poland, countries are aiming to produce a written set of rules for the Paris Agreement.

A draft carried into this conference was a mess of unresolved options. A new version began being released in segments overnight on Tuesday and negotiators were nervously awaiting the full drop.

Which parts will have been cut or massaged? And which countries will see their preferences ignored?

There’s a long way to go in these talks, but this will be the first real test of countries’ willingness to compromise.

Megan Darby and Sara Stefanini go beyond the Cop24 walls to speak to trade unionists at a recently closed Polish coal mine and a Katowice climate activist about the effects of the green transition in Silesia. Subscribe, share and tune in tomorrow!

Leading scientists of the Intergovernmental Panel on Climate Change (IPCC) presented the findings of their latest report on the 1.5C global warming threshold to negotiators on Tuesday afternoon.

In a plenary session, national delegates had the chance to ask questions. Some leapt straight to a political statement; the Maldives, speaking for small island states, said the report was a “gamechanger” and called for ambitious action to hold temperature rise to 1.5C.

“The author is reluctant to tell us whether or not it [holding warming to 1.5C] is feasible,” said China in one of the pithiest interventions, asking for a direct answer.

Jim Skea responded that the IPCC deliberately avoided a yes/no conclusion. Because it’s complicated. It depends on things like whether policymakers are prepared to close coal plants before the end of their technical lifespans. In other words, the ball’s in your court, China.

The Polish presidency here may not be interested in revving up ambition, but UN secretary general Antonio Guterres is.

At a press conference, he trailed a climate summit to be held in New York at next September’s general assembly. This has the explicit aim of encouraging world leaders to submit stronger climate pledges to the UN process by 2020.

“I believe the summit next year can be an essential piece in our strong will to make sure we are able to catch up,” Guterres said, noting existing commitments are inadequate to meet the temperature limits in the Paris Agreement.

Another goal of the NY shindig is to show progress towards the 2020 target of channeling $100 billion a year to the developing world for climate action.

The Green Climate Fund is part of that but “far from being the totality,” said Guterres. After a turbulent year, the flagship scheme has triggered a new fundraising round, which the SG said he expected to be complete before September. Germany last week became the first to promise new funds, with a €750 million ($850m) contribution.

“There has been a meaningful improvement of the GCF” to resolve some “dysfunctionalities”, Guterres added. “The GCF needs improved management to be more effective, but it also needs funds.”

On the bigger picture, he said: “What we need is a transparent mechanism to see how financial flows can move from the developed to the developing world, from public and private sources.”

The French government has suspended the diesel tax hike that had inspired the gilets jaunes’ protests. It’s an attempt to appease what some see as France’s worst period of unrest since May 1968.

The Polish hosts of Cop24 may be feeling vindicated. They have called for a ‘just transition’ that incorporates social planning with the green shift. The French have provided an object lesson in the dangers of ploughing on with ecological policy without enrolling the community.

Now, it has gone beyond diesel. A spokesperson for the French protesters downplayed the gesture as “a crumb” in response to demands that have since widened to living costs and social inequality. They want the “whole baguette,” he says.

Tuesday was St Barbara’s day, a celebration of the patron saint of miners.

It is a bittersweet occasion in Zabrze, 20 kilometres from Katowice, since the Makoszowy coal mine – their major employer – closed in 2016. Climate Home News met the handful of remaining trade unionists, who see no justice in the Polish government’s “just transition”.

The chief climate negotiator for Brazil’s outgoing government called on developed countries to deliver on their commitments to raise financial aid and reduce emissions even before the Paris Agreement takes effect in 2020.

“These financial commitments were not mere ornaments to the Paris Agreement,” J Antonio Marcondes said in a statement sent to CHN on Tuesday. “They were fundamental elements in the balance of the agreement, which must be fully delivered for developed countries to meet their historical responsibilities, and for developing countries to reach an even higher gear.”

Further delay, both in mobilising the money and lowering greenhouse gases, will put the accord’s goals for limiting global warming out of reach, he added. “Emission reductions are like credit card debt – the longer they are put off, the more expensive and painful they become.”

Meanwhile in Brussels, EU countries on Tuesday formally signed off on policies that will hike the bloc’s goals for adding renewables to 32%, and for improving efficiency to 32.5%, by 2030. That’s from 27% for both. They also finalised the governance regulation designed to monitor countries’ progress towards their climate and clean energy goals and keep them on track.

That’s the number of party delegates registered for this Cop by 12 December, according to analysis by Carbon Brief. The figure, which is less than Paris (around 22,000) but more than Bonn (11,300), backs up the widely held idea that this is the most important climate summit since 2015.

The data also shows that Africa has once again sent the five largest delegations, with Guinea heading the table with 406 delegates. Syria and North Korea linger at the bottom, respectively sending one male and two female representatives. At 188-strong, the French delegation is Europe’s second largest, after hosts Poland.